In a perfect world, we’d get a legacy sequel where Yvonne returns to kick some Krueger ass. 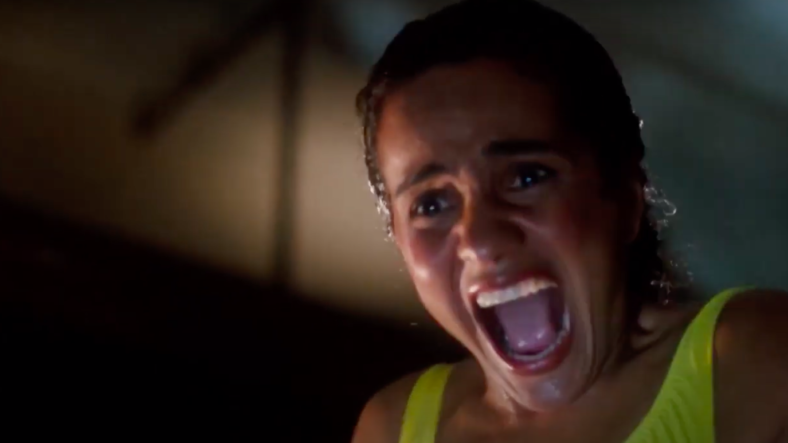 What makes a final girl? She’s the last one standing after a massacre who must face the baddie(s) within the film’s final act, yes? There are a few exceptions to the trope’s rule. The Fifth Final Girl for week 3 is one of those exceptions. Let’s talk about Yvonne Miller (Kelly Jo Minter) from A Nightmare on Elm Street 5: The Dream Child (1989). Gasp! You may be shocked that this isn’t about Alice Johnson (Lisa Wilcox), the returning final girl from A Nightmare on Elm Street 4: The Dream Master (1988). Trust me, no one is as shocked as I was. Alice is near and dear to my heart within the realm of horror. She definitely goes through a shit ton throughout the fifth entry. Yet, Yvonne’s trajectory throughout the fifth film injects just as much importance into the story.

The Dream Child begins, assumingly, a year and a half(ish) since the events of the previous film. Alice is happily in love with Dan (Danny Hassell), has surrounded herself with a new set of victims for Fre … er, new set of friends, and is graduating high school. Among that new set of friends is Yvonne. Smart, headstrong, athletic, and independent, Yvonne seems to have the closest relationship with Alice. While she’s set up to be a prime victim for Krueger’s (Robert Englund) glove, there’s a yearning created for her not to end up there. She goes on to prove throughout the film that the aforementioned aspects of her character are a huge part of her survival to the end credits.

An unusual aspect of Yvonne is that she seems to not have any weaknesses that Krueger can use to his advantage within her dreams. At least in the previous two entries, each teen had a character trait or trauma that could be used against them. Yvonne is a surprisingly put-together individual for the franchise. There is another film in another universe that uses that against her, but this ain’t that film. What she definitely is is a true ally for Alice. Having discovered that she was pregnant after Dan’s death, it’s Yvonne who is there to listen, provide medical care (she volunteers at the hospital, the overachiever), and create a safe space for Alice.

If there is any flaw that Yvonne has, it’s not believing Alice about Krueger. Even after Dan and Greta (Erika Anderson) die mysteriously, Yvonne doesn’t want to hear anything about Krueger. Even when Mark (Joe Seely) presents her with the facts, she steadily denies the existence of Krueger. This leads her to storm out on Mark and Alice, leading her straight to her introduction with the metal-clawed monster.

Technically, Yvonne doesn’t initially face off against Krueger, personified—or demonified, whatever. She’s attacked by a huge diving board turned Krueger claw. I like to think it’s because Yvonne initially didn’t give a shit about Krueger, and constantly refused to acknowledge his existence. Krueger’s power comes from the belief in him, right? Once Mark presented physical evidence of Krueger’s existence, this put a crack in Yvonne’s thoughts, allowing Freddy to partially manifest in her nightmares. Once the diving board claw goes down, he’s in her psyche. They’re physically next to each other in the following scene where Alice saves Yvonne.

Now that Krueger has made his way into Yvonne’s zeitgeist, it’s time for Alice and her to put an end to him before he successfully kills them both and takes over Alice’s unborn child. Krueger’s mother, Amanda (Beatrice Boepple) must be released from her physical grave on earth in order to enter the dream world, and entrap Krueger within her. Alice sets off to confront him in the dream world while Yvonne sets off to find Amanda’s grave within the depths of Westin Hills Psychiatric Hospital, the birthplace of Krueger. Yvonne finds Amanda’s grave and releases her soul to enter the dream world. There, Amanda confronts Freddy just as he overpowers Alice and her unborn child. Without Yvonne, would Alice have survived? As an Alice fan, I say, “Well, yeah, she’s Alice.” Really, though, she wouldn’t have. Yvonne provides the means for her survival.

Yvonne is the only Black teen to survive within the realm of A Nightmare on Elm Street. She doesn’t end up falling victim to Freddy in the next movie like Kincaid (Ken Sagoes). Granted, she’s not in the next film, but neither is the storyline that she’s in. For that, I’m thankful.

The A Nightmare on Elm Street franchise is full of original characters with different backgrounds, but the majority of them are white. The Black characters that came before and after the fifth entry are few and far between. Aside from Kincaid, the two other Black men in the franchise, Max (Laurence Fishburne) and Doc (Yaphet Kotto), survive. The only other Black girls being Sheila (Toy Newkirk) from Nightmare 4 and Kia (Kelly Rowland) from Freddy Vs. Jason (2003), both of whom do not survive their films.

Kelly Jo Minter proves that she’s just not that Black character who is going to die in horror movies. In addition to A Nightmare on Elm Street 5: The Dream Child, she also makes it to the end of every single horror movie that she’s in. Although she only had a bit part, she didn’t fall victim to the vampires of Santa Carla in The Lost Boys (1988). A vengeful spirit of the silver screen doesn’t get her in Popcorn (1991). Those crazy, sick people don’t mess with her in The People Under the Stairs (1991).

It’s rare that characters in the fifth entry of a horror franchise provide such a fresh perspective. It’s rare, for the 80s, that there are two final girls. And it’s rare that a Black woman makes it to the film’s finale. Yvonne checks off all of those boxes making her one of the exceptions to the final girl trope. She’s strong, she’s a fighter, she’s a best friend, and she’s a Black girl. In a perfect world, The Dream Child would be better received than it was and is. In that world, we’d get a legacy sequel in which Yvonne returns, kicks some Krueger ass, and survives, once again.