Chad Collins takes a look at what the ending of Camille Griffin's debut feature really means. 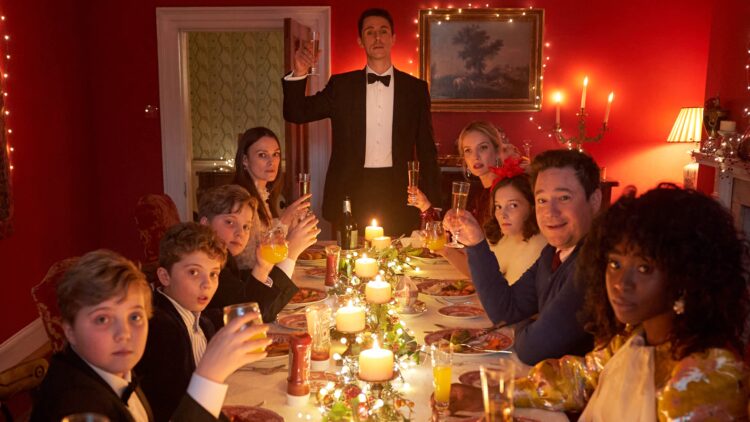 This is no ordinary Christmas dinner, though. Potatoes and wine are in short supply because later that night, everyone is going to die. An abstract, noxious cloud has overtaken the globe, killing everyone it comes into contact with. The poor, impoverished, and neglected are left to choke on their own blood in gutters and ditches, while those more fortunate have been given suicide pills. Nell and her entire family, much to the chagrin of oldest son Art (Jojo Rabbit’s Roman Griffin Davis), plan to take them. An explicit allegory for climate change and the damage we’re doing to the planet, Art resists the adults’ acquiescence. Rather than try to change anything, they’re content to simply die. It’s a clear parallel for enduring damage done to natural ecosystems whose worst consequences will arrive after those responsible are already dead. Like the storm itself, beware of spoilers below.

Silent Night is a rare kind of horror, one that exhibits elasticity in its transition from distinctly British black comedy to pure existential horror show. Director Griffin refuses to keep the apocalyptic cloud constrained to the periphery. Cotton-candy colored and leviathan in size, it engulfs entire cityscapes, leaving corpses and mangled greenery in its wake. It taps into the perennial fear of a world rejecting its inhabitants, a theme similarly explored in both this year’s In the Earth and The Feast. The shift in tone won’t work for everyone. But Griffin isn’t afraid to let Silent Night travel to some particularly dark places. One notable scene has Knightley’s Nell talking to her son in the family car after he’s run off, unwilling to accept the suicide pact his family has made. When the storm arrives, they all plan to take their pills together.

He’s inexorable in his commitment to living, and Nell, fighting back tears, begs him to take it. If he doesn’t, they’ll all be dead, and he’ll be all alone. The camera swaps between perfect frames of their two faces, augmenting each party’s worst fear. Art is afraid of dying while Nell is afraid of her son being all alone. The conflict culminates with Art running off once again, this time stumbling across a dead family in their car. Thoroughly traumatized, he is scooped up by Simon and returned home where he is left to recover in bed. After his family leaves, Art wakes up, only he’s seizing. Blood pours from his eyes and mouth as he struggles to breathe. Moments later, his body goes limp.

With the storm right outside, the disparate Silent Night parties all begin to take their pills. Bella takes hers and gives it to her passed-out girlfriend, Alex (Kirby Howell-Baptiste), though she soon throws it up. Bella is forced to stab her and the two die together in the kitchen. Sandra and her husband (Rufus Jones) take theirs, the sole moment of intimacy they display toward the other the entire movie. Nell and Simon prep their children after a protracted comedic vignette of Simon running up and down the stairs until the sodas to wash them down with are just right.

At last, they go to wake Art. Presuming him dead, they swiftly down their pills and lie next to him on the bed. As the camera pans the entirety of the house, zooming in on every deceased person, it returns to Art. Just as the credits roll, his eyes open and he gasps for air. Art isn’t dead.

It’s a wallop of an ending and sure to be a point of contention among audiences. While it isn’t strictly speaking unexpected– the final beats and audience expectations all but confirm a final twist– it’s no less discouraging. Beyond the sheer meaning and how of it all, it solidifies Nell’s undying fear– her son is now all alone. Commentary on climate change, the authentic irascibility of the young, and the willful inaction of those with a capacity for meaningful change are eclipsed by a truly horrific final note. It’s no different than what Frank Darabont achieved with The Mist.

In a movie that both embraces and rejects science, the ending further confounds. Though conceived of before the COVID-19 pandemic, the parallels are impossible to miss. The adults especially urge the children to “trust the science” and take the pills. Yet Silent Night’s ending rejects the expertise of those esteemed scientists. In effect, they were wrong. That alone is sure to incite lengthy and urgent commentary yet clarifies the ending itself.

Like some kind of environmental Purge, Silent Night is clear in its contention that those in charge are being punished. The world has rejected them, not the young, Thunbergian acolytes with a fervent desire to do better by the world they live in. Art survived on account of hope and earnestness. Quite simply, he didn’t give up. No different than our current age, the world is/was on the brink of destruction. Silent Night evinces the simplest truth of all– nothing is ever hopeless, though hopelessness is next to death.