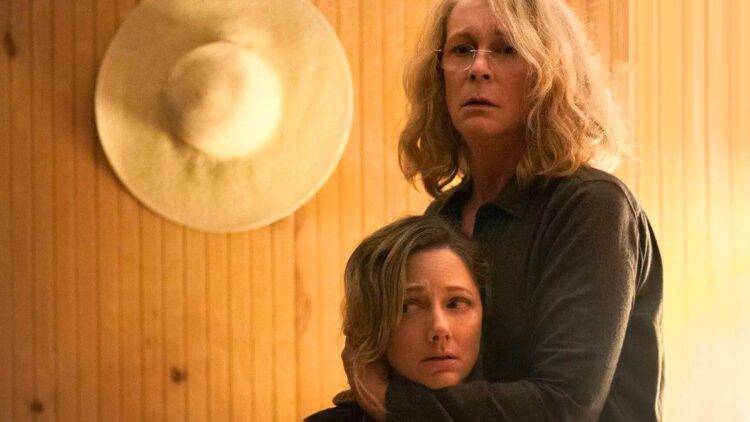 When David Gordon Green and Danny McBride were first announced as the arbiters of Myers’ new legacy, fans were naturally wary. Neither had considerable experience in the horror genre and the resuscitation of Myers, the apex slasher, seemed too great a responsibility. Still, John Carpenter himself was impressed with their vision, and the early marketing made a considerable zeitgeist push. Halloween (2018), beyond being about everyone’s favorite masked killer, was also about trauma. It explored the generational links that bind, how the sins of a parent can infect their children, and even threw some #MeToo iconography in to boot. The final product was a welcome return to form, even if Green’s lofty thematic aspirations fell short of what he intended.

The core idea, though, was brilliant. Green expanded his scope to not just reintroduce Laurie Strode, the original final girl, but her family, as well. Jamie Lee Curtis returned, but Judy Greer and Andi Matichak were introduced as Karen and Allyson Nelson, respectively, her daughter and granddaughter. Matichak’s Allyson struggled to understand the breadth of her grandmother’s psychoses. But Greer’s Karen was mindful of it every day. Her performance was subtle yet incredibly effective. In every scene, she looks worn down and terrified, infected by her mother’s paranoia that Michael Myers wasn’t done—that one day, he’d be back to kill them all.

In early childhood, Karen underwent considerable survivalist training. She was trained with firearms and knives, locked away, and denied any semblance of normalcy until social services took her away at 12 years old. Laurie, though, never budged. She never apologized nor endeavored to make amends. Instead, she continued to haunt Karen just as Michael haunted her. To Karen, Laurie Strode—her own mother—was the boogeyman.

Green, in his first trilogy entry, at first seems eager to explore this behavioral thread. But he too easily concedes to the demands of the franchise. Michael is back, and whether intentionally or not, Laurie Strode is vindicated. She was right the entire time; her daughter’s traumatic childhood be damned. Part of the problem perhaps lies in just how peripheral the Strode women are in Green’s original. Outside of the climax, Laurie, Karen, and Allyson are outside of Michael’s path, only encountering him when chaotic variable Dr. Sartain (Haluk Bilginer) brings him to them. Halloween Kills retroactively alters the myth, making it clear that Michael was never interested in pursuing Laurie Strode; he only wanted to go home.

This, no different than Green’s 2018 threads, could work. Karen herself remarks as much in Haddonfield Memorial Hospital while her mother undergoes emergency surgery for the knife wound she received earlier in the night. Her mother put both her and her daughter in harm’s way. Michael only attacked them because Laurie brought them to her compound. Worse still, Karen’s husband, Ray (Toby Huss) is dead because of Laurie. Had she let them stay in their own house instead of weaponizing fear to whisk them away, Ray might still be alive.

Related: Get An Exclusive Look At the ‘Halloween Kills’ Gnarly Playground Massacre

This, though, is just as swiftly dropped, with Karen’s characterization reworked into the voice of reason. She simply wants to protect her mother and daughter alongside responding incredulously to the violent mob forming in the hospital lobby. Greer, as with the first, is a talented enough performer to make this work. Her horror filmography especially is a considerable reminder of just how much she can bring to the most incidental of characters. Cursed is a camp classic and she seamlessly took up Betty Buckley’s torch in Kimberly Peirce’s Carrie remake. It is also, unfortunately, a reminder of how often she’s given nothing to do. An actress of her stature deserves more in Jurassic World than standing around off-island worrying about her two sons. It hurts, too, to see early promotional material for Halloween Ends quickly substitute her for Kyle Richards’ Lindsay Wallace.

Halloween 2018 did have the decency to give her what is arguably the movie’s best moment. As Michael intends to make his way into the hidden bunker at Laurie’s compound, Karen is armed with her childhood rifle. Ostensibly terrified, she shouts to her mother upstairs that she can’t do it; she can’t kill Michael. Michael then swiftly appears in the stairwell, and as he does, time slows, and Karen pulls the trigger. “Gotcha,” she says. It worked like gangbusters. It gave Karen both something to do and some semblance of agency beyond the trauma her mother cultivated.

Related: The Bangs Are Back: Kyle Richards to Return in ‘Halloween Ends’

Halloween Kills endeavors to replicate the moment, right down to the iconic line. But it simply doesn’t work the same way, especially after the movie once again sidelined her trauma for several other disparate threads. As Karen’s agency swells in the finale—she saves her daughter and delivers what is believed to be the final blow to Myers—it almost immediately dissipates. Upstairs in the remodeled Myers house, finally believing evil has died, Michael appears. He savagely attacks her, slashing and stabbing her in the same spot he killed his sister decades before. Karen falls to the floor, bloodied and dead.

The ending was likely conceived for two reasons. The first of which, naturally, is shock. Killing a major character in the final reel is the perfect way to shock audiences and embed anticipation for the third and final entry. Within the framework of what Green is trying to do, too, the ending was likely positioned as a galvanizing kill; it’s the final incentive for Laurie Strode to take the boogeyman on once and for all (Kills never acknowledges that she’s had several “final fights” with Myers). That is all incidental or nonexistent, though. What it really does is betray both Karen Strode and the trauma-informed Halloween movie Green ostensibly desired to make.

Related: Bent Out of Shape: Michael Myers’ Muddied Mythos and the Infuriating Ending of ‘Halloween Kills’

As muddled as the message was to begin with, Karen’s death radically undermines what Halloween and Halloween Kills wanted to say about trauma. In lieu of general depth and interrogation, Kills especially wastes time on underdeveloped community threads and mob mentalities, ignoring the big, traumatic knife in the room. Laurie Strode was Karen’s Michael Myers. She consistently put her daughter in danger and rendered her incapable of living a life beyond fear. Just as Myers kept Laurie trapped in her own violent, traumatic past, Laurie did the same to Karen. She didn’t have to, though. Laurie had sundry opportunities to do and be better. It’s arguably the only way this new trilogy could have worked the way Green and McBride intended. Imagine the thematic possibility of refracting the generational evil of a famed serial killer through one of the genre’s most enduring survivors.

Laurie is never held accountable. Sure, her daughter is killed. But for as much as Kills wants that blame put on Myers, it’s shared in equal measure with Laurie. Even in the face of death, she prioritizes her own mythic status over the safety of her daughter and granddaughter who, lest we forget, has now lost both of her parents in one violent night. Karen Strode deserved better. Unfortunately, just as Kills stumbles with internal consistency or motivated plotting, it stumbles with Karen. This whole time, it seems we were the ones duped. I can see the filmmakers now, crouched and terrified in the basement. It was a “gotcha” moment all along.