‘The Last Frankenstein’ Is A Movie That Was Made 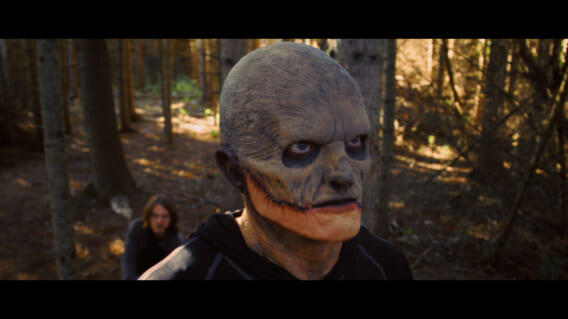 Mary Shelley’s Frankenstein is an iconic piece of literature. It is also one that has been revisited a few times because of its legendary status. It’s such a part of the genre and is in the DNA of quite a lot of the media we love. This is why it’s not surprising to see a modern take on old reliable.

I honestly didn’t know what to expect from this movie when I hit play. We open on a kid running from a monster and feel as if we’re being thrown into chaos. A couple comes between the boy and this monster which doesn’t end well. We watch it rip the guy’s arm off and beat him with it before ripping the woman’s face in half. This is a really fun opening to a film because I love mayhem on any budget. The monster picks up the chase of his original target only to be thwarted by a semi-truck. This is where the film shifts. All of a sudden we’re following the sad Dr. Jason Frankenstein (William Barnet) who works in a hospital. He also has a girlfriend and they feel like a daytime talk show couple from the 90s that should break up already.

As we follow Jason we find out why he’s frustrated and where his moral compass is. His dialogue makes it seem like he’s having a very young mid-life crisis. He spent years studying his grandfather’s research but does not get results, or advances in the medical field. He’s very concerned about what he hasn’t accomplished. He even says his life is halfway over. So of course his old monster turns up as a patient at the hospital where he works. Jason devises a plan to have the monster code so they’ll transfer it and he can steal it. He enlists some sketchy paramedics, who are ready and waiting to kill for money apparently, and sets out to build a new monster.

This is where I expected the stakes to be raised. However, they stayed low and we just kind of floated through this movie. None of the murders are interesting or tense. Even Jason cheating on his girlfriend just felt inevitable and like another thing on the checklist. Because I’m rooting for all movies I figured when this new monster got out we would get back to the chaos the top of the movie gave us. While it puts an end to the flashback sequences of elder Frankenstein men silently staring at each other, that plot point also doesn’t really live up to its potential. The monster broke out to ride a motorcycle and pick up a hitchhiker that he ended up dating. He’s taking her horseback riding when Jason tracks him down.

The inevitable showdown was funny and seemingly rushed. The new monster doesn’t get a fun kill like the one up top. Instead he gets to squeeze a woman’s face until she dies as he holds a child hostage for a couple of seconds. He seems to give up on himself before he starts. That kind of feels like this movie’s mood to be honest. It feels like it was made because they needed to make something instead of anyone wanting to be here. It’s sad because we don’t get to know what anyone involved is truly capable of. Perhaps if any of the conflicts, murders, etc. had a moment to breathe we could have a scene to root for. Everything begins and ends so quickly that I found myself asking why do it at all?

Things happen so maybe this product wasn’t writer and director David Weaver’s original intention for Frankenstein. Or maybe life got in the way and things had to be cut. Whatever happened, this movie feels more like more of a chore than another stab at Shelley’s popular tale.

Let me know if you have seen this one at @misssharai.

If you want a modern take on the classic monster then this is one. Or if you’re a supporter of indie films then this could also be a watch.