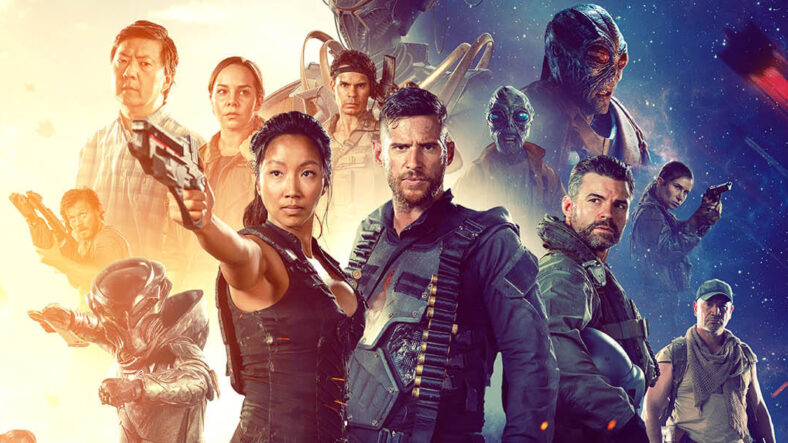 Following on from the success of 2018’s Occupation, director Luke Sparke has returned to helm Occupation: Rainfall. It’s a bigger and bolder sequel that expands upon everything great about its predecessor while also standing out as a damn fine sci-fi action movie in its own right. If you enjoyed Occupation, you should check out Occupation: Rainfall on Netflix now.

Dan Ewing returns as Matt Simmons, an embittered human soldier willing to do whatever it takes to win the war against the extraterrestrial invaders who attacked Earth in the previous film. After his superiors learn that the alien forces are searching for a MacGuffin known only by the codename ‘Rainfall’, Simmons is tasked with locating the mysterious plot device before it falls into the hands of the enemy. Partnered with an alien defector who now fights to protect humanity, Simmons races against time to discover the secrets of Rainfall. Along the way, he learns a little about what it means to be human.

While Occupation: Rainfall was produced for a fraction of the budget of most Hollywood blockbusters, it still boasts some hugely impressive visual effects and enough action set pieces to satisfy hardcore action junkies. From dogfights between modern military fighter jets and alien spaceships, to ground battles between hoards of human soldiers and alien warriors, this is a film with impressive visuals on display. We’re even treated to some outlandish VFX sequences, such as horse-like alien creatures galloping through the Australian Outback. There are also sword fights between alien combatants that look almost as impressive as the Lightsaber duels in the Disney-era Star Wars movies.

But dazzling special effects would be nothing without a decent story. Thankfully, Operation: Rainfall manages to deliver on this front too. As the central protagonist, Simmons is likable enough to carry the film on his shoulders. His determination to always do the right thing and his ability to overcome adversity makes him someone who we instantly want to succeed.

The film initially leads us to believe that the humans are the good guys and that most of the aliens are nothing more than a menace needing to be wiped out. But, we soon learn that the truth is far more complicated. It’s revealed that alien refugees are actually being kidnapped and experimented on by the human military in an attempt to create biological weapons. This shocking revelation serves as a reminder that morality is always something that will be viewed objectively by opposing sides. The film’s refusal to view concepts such as good and evil in plain black and white terms will certainly make Occupation: Rainfall stay with viewers long after the end credits roll.

With the popularity of The Book of Boba Fett, it’s not a stretch to say that many viewers will tune into Occupation: Rainfall to see Temuera Morrison in action. While the New Zealand actor does not appear until around the halfway mark, he still had a decent amount of screen time. He plays Peter Bartlett, a former war hero who now just wants to live a life if peace in an isolated community he established with his daughter and various other survivors. After refusing to surrender Gary the alien to a lynch mob, the determined Bartlett then accompanies Simmons on his journey to discover the truth about Rainfall.

At this point, the film starts to falter a little. The majority of scenes inside the facility focus on scientist Bud Miller (Ken Jeong) and his alien companion, Steve (voiced by Jason Isaacs), who constantly bicker and squabble with one another. It quickly becomes tiresome watching these two characters arguing like children. It seems like they were included simply because the filmmakers felt it was necessary to shoehorn humor into what otherwise may have seemed like a relatively bleak film. After watching Bud tearing off Steve’s fake mustache, you feel a sense of relief whenever this pair isn’t onscreen. But, it’s still reassuring to see them putting their differences aside and working as a team when the facility is attacked.

Jet Tranter also stars as Amelia Chambers, a human resistance leader who becomes viewed as a hero after the events of Occupation. After witnessing the atrocities committed against aliens by her own people, she fights to free the extraterrestrials from captivity. This puts her at odds with the villainous Wing Commander Hayes, who views the aliens merely as assistants rather than sentient beings. While Hayes seemed like a standard one-note villain at first, it’s revealed that he lost his wife in the invasion, which he uses to justify his appalling actions. As a human, he clearly views himself as being above extraterrestrial life. Yet he also sacrifices his humanity by torturing and mutilating his prisoners in a futile attempt to win the war. The conflicting ideologies between Hayes and Chambers led to some interesting discussions during the scenes where they were not literally at each other’s throats.

Occupation: Rainfall feels like a large-scale sci-fi popcorn movie and presents some intriguing moral dilemmas for viewers to ponder over. There’s plenty of heart and soul between the huge explosions and aerial combat sequences. This is a film that makes you question the decisions leaders will need to make in times of war. It also treats you to massive blockbuster action which really will make you wonder how it could possibly have been produced for such a modest budget. Sci-fi fans should check this out immediately.

With its strong central performances, blockbuster-level visual effects, and its willingness to address serious issues of morality, Occupation: Rainfall is a hugely entertaining viewing experience which will leave audiences hungry for more.