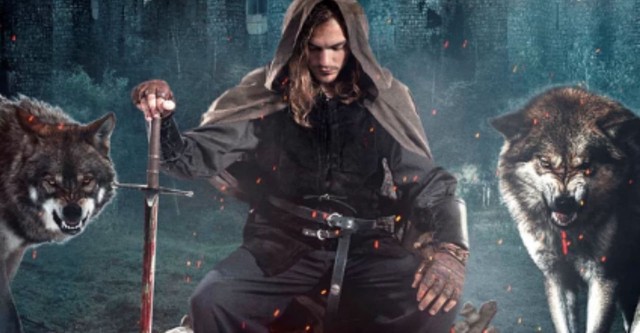 British director Charlie Steeds is already a big name in the horror community. He already has a number of feature films under his belt, including Deadman Apocalypse, Escape from Cannibal Farm, An English Haunting, and The Barge People. For his latest picture, Steeds decided to travel back to medieval times for Werewolf Castle. It’s a fun and fast-paced historical action thriller about knights fighting werewolves. With such a killer premise, it would be hard for Werewolf Castle not to be entertaining. Thankfully, Steeds delivers the goods.

Werewolf Castle opens with a pack of werewolves raiding a small village and killing everyone in sight. That includes the bride-to-be of young Thorfinn (Peter Lofsgard). Although he is clearly not a fighter, Thorfinn is left without purpose after his devastating loss. He decides to guide an order of knights on a dangerous quest to warn the king of the werewolf threat.

Thorfinn starts off as a naive young village boy. But since he has nothing left to lose, he clearly is no longer afraid to place himself in harm’s way as he accompanies the knights on their quest. Although he had no previous combat experience, Thorfinn is forced to fight at several points throughout his journey. As we follow Thorfinn, we see him go from a naive young village boy into a hardened warrior. Lofsgard really helps to sell the character’s transformation. While Thorfinn seemed like a pushover in the first act, the sight of him swinging a longsword at hoards of werewolves towards the end cements his status as a total badass. Werewolf Castle works as a character study, with Thorfinn’s transformation into a battle-scarred hero being some particularly strong writing.

Despite its modest budget, Werewolf Castle still boasts some impressive sets and action set-pieces. The actors playing the knights all evidently have some degree of combat training, as they clearly knew what they were doing with their weapons. They also convincingly pulled off the grizzled mannerisms of men who have been fighting for most of their lives. Jay O’Connell is a particular standout as Hal Skullsplitter, a bitter and resentful warrior who’s initially reluctant to allow Thorfinn to join the knights on their quest. He eventually warms to the younger man after seeing his determination to fight to the end, no matter the cost. We eventually learn that Skullsplitter has made plenty of his own sacrifices throughout his tenure as a knight, which explains his disdainful nature.

Greg Draven is also great as the amicable Thomas Fairhurst, who acts as a kind of mentor figure to Thorfinn throughout the film. He teaches Thorfinn the importance of always doing the right thing, no matter the cost.

However, it’s an odd choice to have an exuberant and flamboyant central antagonist. The over-the-top performance of Reece Connolly as the villainous werewolf Wolfstan (who spends most of his screen time in human form) might have some viewers scratching their heads.

When it came to the actual werewolves, Steeds made the bold decision to have them played by men in suits instead of using CGI, with varying results. While it was somewhat refreshing to see a modern werewolf movie that conjured up memories of old-school horror pictures, it also needs to be said that the werewolf costumes did not look terribly convincing or frightening. Upon seeing the costumes for the first time, you would be forgiven for thinking of Werewolf Castle as a comedy. But the film is actually deadly serious for the most part. Thankfully, the committed performances from the actors playing human characters and Steeds’ accomplished direction means that you probably won’t be too distracted by the silly werewolf costumes.

There haven’t been a huge number of medieval horror films released over the past ten years. Werewolf Castle really stands out as a strong example of a period monster movie filled with dedicated central performances, strong character development, and enjoyable action set-pieces. If you want to embark on a ferocious medieval adventure, and if you can look past the odd monster suits, then Werewolf Castle might just be one of the most entertaining werewolf movies you’ve seen in a long time.

Writer and director Charlie Steeds has once again proven himself to be a gifted horror filmmaker, and audiences looking for a fun and brutal horror adventure set during the Middle Ages will have a great time with Werewolf Castle.