FilmQuest Review: ‘Dawn Breaks Behind the Eyes’ May Make You Feel Like You Just Took Shrooms

This gothic psychedelic trip is disorienting, chaotic, bizarre, and beautiful. 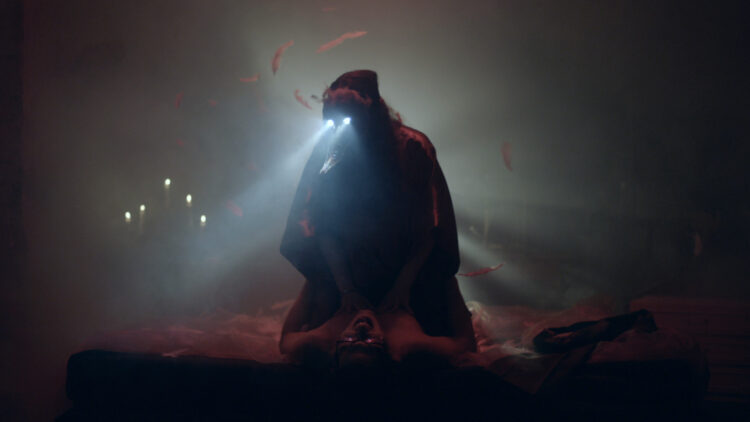 About once a year, I see a movie that is so weird it takes me about 48 hours to figure out if I like it or just like chaos. Dawn Breaks Behind the Eyes is that movie this year. The film made my inner-art kid happy while upsetting the film-goer part of my brain, leaving them at war. This gothic, psychedelic, ’70s-style German-made movie is unbothered by anything remotely close to realism or structure. It is beautiful chaos in its purest form.

The movie starts out following a couple that just inherited a rundown castle. The two of them seem like they’re the perfect couple to get a divorce even before the supernatural elements start to come into play. Around the time you begin to wonder how this movie escalated so quickly, you find out that everything we know about this movie is wrong. As you get used to this new feeling of not being able to trust your own eyes, the movie zigs again leaving you in awe but also completely confused (in possibly a good way). As you are feeling defeated, the movie tries to bring home a message that was somehow there all along.

All of this chaos happens amid a beautifully designed film. I immediately noticed the sound design as the couple entered their creepy and rundown castle. The way the footsteps moved through the house and the way the glass in a chandler that might have fallen forever ago clinked made me take notice. The way the set design, cinematography, and costumes seamlessly change with each chapter makes every time the rug is pulled out from underneath you more disorienting. The movie should be nominated for awards on visuals alone. Even the props department was able to get in on the fun with some of the practicals. My favorite standout moment of violence within all of the violence is where a penis is ripped off and casually discarded onto the floor.

This movie makes no sense on paper, and can only be described as a few very distinct moods, but somewhere in the chaos is a movie that I am obsessed with for whatever reason. I know Dawn Breaks Behind the Eyes is not for everyone, and the re-watch value is probably pretty low, but it is so bizarre that you have to respect it. It is more of an experience and vibe than a movie. I legitimately felt like I had taken shrooms and sat in the dark with strangers for an hour and 12 minutes and I’m not mad about it.

Also, stick around for the credits, they’re really fun. I won’t talk talk about them, though: That might give away too much about some of the film’s chapters.

Dawn Breaks Behind the Eyes had its regional premiere at FilmQuest 2021.

More of an experience than a film, Dawn Breaks Behind the Eyes is so beautiful, chaotic, and bizarre that you can’t but tip your hat to it.