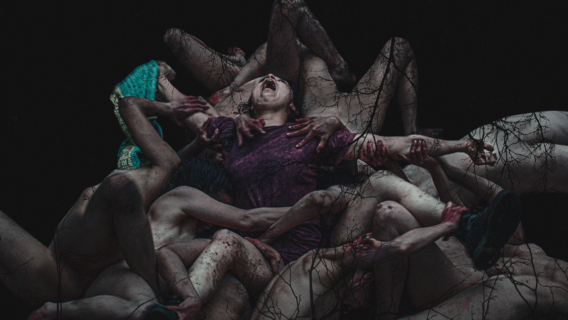 Michelle Garza Cervera’s feature film debut Huesera: The Bone Woman is the queer body horror of our dreams that investigates motherhood through a wholly unique lens. Yes, motherhood is a tried and true genre subject, but Cervera subverts expectations with this shocking portrayal of what it means to want, or not want, to be a mother. We’re excited to share an exclusive look at the film’s new poster.

In Huesera: The Bone Woman:

Natalia Solián stars as Valeria, a young woman pregnant with her first child. However, Valeria’s happiness is cut short when she’s cursed by an evil entity. As her life and relationships fall apart, she plunges deep into the world of dark magic. Consumed with the occult, her last hope arrives in the form of a coven of witches, but will her safety and salvation be worth the risk to her soul?

In his review of the film out of the 2022 Tribeca Film Festival, Dread Central’s Chad Collins wrote:

“The scares land, the heartache pulses, and at times, it feels like a poignant insight into a life all too common. Huesera embodies the best of rich, specific horror fare, a movie patched together from some of the best to resemble something altogether new and deeply, profoundly personal.”

Check out the terrifying new art for Huesera: The Bone Woman:

In honor of the upcoming release, we’ve also teamed up with XYZ Film on an art contest inspired by the film. Learn more and enter here.