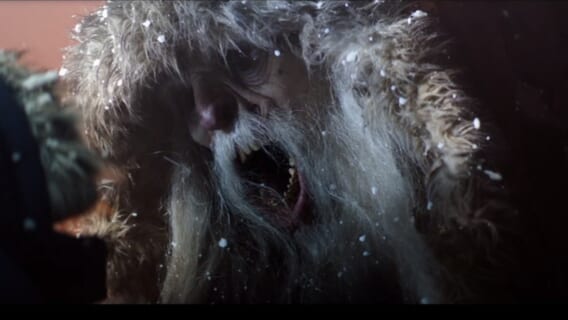 Michael Dougherty’s Krampus has lore. Lore makes everything better. Sure, while the recent 4K release of the “Naughty Cut” may not have fully delivered on the full promise of an absolutely unhinged Krampus, Dougherty’s Gremlins homage remains one of the freshest, scariest Christmas horror movies in years—arguably of all time. Dougherty retains the wicked humor of Trick ‘r Treat without sacrificing the genuine horror of his core conceit. As Max Engel tears his letter to Santa, frustrated by his family’s dysfunction, he inadvertently summons Krampus and his legions of creatures, trapping his family in an interminable blizzard as they’re picked off one by one. Toni Collette rocks, the score is phenomenal, and those aforementioned creatures are a practically conceived delight.

Here, we’ll be looking at the many (many) creatures of Krampus, naturally ranking them on just how darned cute they really are.

Krampus was a lot of fun until Der Klown, a kind of demonic jack-in-the-box, showed up. Afterward, it was an existential nightmare. Portrayed by Brett Beattie, Der Klown has a porcelain face, the body of a worm, and a gaping, monstrous jaw. He crawls around the Engel family’s attic with his stout little arms. In his standout moment, he is seen quite literally swallowing Jordan (Queenie Samuel). It’s a horrifying scene that renders Der Klown as immediate nightmare fuel. It’d be shocking in any movie, especially a PG-13 horror comedy. No cute points for Der Klown. None. Absolutely not.

Perchta comes for Toni Collette and that’s simply inexcusable. A demonic angel puppet (voiced by Ivy George), she emerges from the ceiling beams, immediately targeting Collette, attacking her with her nasty, serpentine tongue, going so far as to choke her out with Christmas lights. Perchta soon gets her comeuppance, but beyond being simply ugly, she targeted Collette, and that’s a bonafide no.

The Dark Elves, Krampus’ minions, have distinct names. There’s Ketkrókur, Stekkjarstaur, and several others. Enormous care went into their design and performances, especially given how, beyond the main man himself, they’re the most common antagonist, smashing windows, running around causing general mayhem. Members of Krampus’ legion, their goal is to terrorize the family and assist Krampus in carrying out his anti-Christmas deeds. They’re terrifying, sure, but not especially cute. They’re better appreciated from afar.

Of course, there’s the big bad himself. Genuinely, I think Krampus remains one of the best-designed movie monsters of the century, possibly all time. Though his appearances are brief, he’s a behemoth of a creature, awe-inspiring in both structure and scale. Hunch-backed with hooves, an imposing physique, and spindly, long fingers, he’s terrifying, whether corporeal or in animated flashback. Most terrifying is his face, something the audience never even gets to see. According to legend, his twisted visage is actually a horrific Santa mask, with his true form concealed beneath. On account of the robes and stuff, he looks sufficiently cuddly, but upon closer inspection, he’s a lot of things (very, very bad things), and cute isn’t one of them.

Tik Tok, a demonic toy of Krampus’, is really just a souped-up animatronic robot with a not-child-friendly pair of scissors attached to one of its arms. The robot goes after Adam Scott in the attic, hacking at his flesh as the Toys “R” Us pandemonium unfolds. A lot of its cuteness might be rooted in my own childhood and the unfulfilled desires I had to own and battle killer robots, but Tik Tok has a distinct charm. Plus, in the current zeitgeist, he remains the best Tik Tok there is.

I like nutcrackers, okay? I like their look. They’re functional. I like the ballet. I even like them in Krampus. Sure, the Nutcracker only appears in two scenes, once in Krampus’ bag, and once more as the monsters lunge at the screen before the credits, but it’s a Nutcracker. Personally, I like the idea of Krampus, monster that he is, keeping some age-old Christmas traditions alive.

Blink and you’ll miss Pandora. Appearing briefly as Omi’s (Krista Stadler) fate is sealed and she’s pulled into Krampus’ Santa sack, she’s seen on the right-hand side of the bag, ready to reclaim what’s been long missing. I mean, she’s a demonic panda. That’s cute. Drop the “demonic” moniker and Pandora is simply a panda. Pandas are great. Lots of cute points for Pandora.

Like several other monsters (seriously, Krampus is monster movie heaven), the Yule Goat is little more than a peripheral player. Appearing at the climax as Krampus prepares to toss Max and company into the literal pits of Hell. The legend has it that these monstrous goats pull Krampus’ sleigh. Given Krampus’ size, it’s no wonder they’re as frighteningly large as they are, but beneath the monstrous surface, they’re just goats, and goats are cute.

Teddy Klaue is very cute even if he’s got a rotten attitude. Appearing alongside several other demonic toys in the attic, Teddy emerges from the darkness, lunging at Linda (Allison Tolman), taking a solid chunk out of her arm in the process. Truthfully, though, Teddy is probably just misunderstood. He just wants to be loved. He’s not great at showing it, but with a little tender care, he’s liable to see the error of his ways. Plus, those eyes.

Clumpy and Dumpy rock. Not only do they wield a nail gun (with one of those “only in the movies” rapid-fire functions) as they go after David Koechner’s intolerable Uncle Howard, but they look ridiculously cute in the process. They’re laughable, loveable little pals, conniving as they sneak about the house. Sure, they might be one of the few principally computer-generated antagonists in the entire movie, but pixels or not, Clumpy, Dumpy, and their entire ragtag team of militaristic Gingerbread men deserve some love. They’re cute enough to simply gobble up.