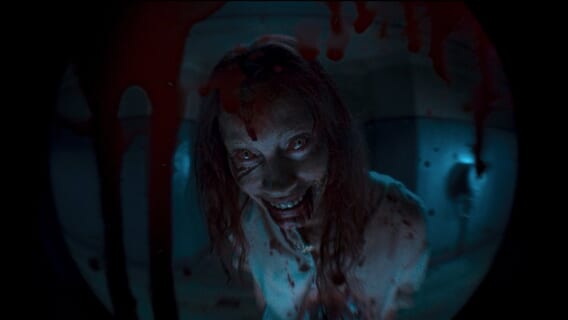 Lee Cronin, director of the criminally underrated A24 release The Hole in the Ground, is finally set to unleash Evil Dead Rise upon the world on April 21, 2023. Originally scheduled for a digital release via HBO Max, Evil Dead Rise is now getting the theatrical release the storied, bloody franchise deserves.

We already know lots, and Cronin has even shared some groovy behind-the-scenes insights on his Twitter. In honor of Halloween, Cronin again took to Twitter, this time sharing the first official image from Evil Dead Rise.

While the image doesn’t reveal a lot, it does have a bloody terrifying deadite staring into what looks to be a peephole drenched in blood. There’s some Opera action going on here, and it looks incredible. While a trailer has yet to be released, we do know Rise will tell an entirely new story within the larger Evil Dead universe.

This time, audiences will follow a single mother and her experience with the infamous Necronomicon. With a reported 6,500 liters of blood used on set (several of which are seen in the above image), Rise will no doubt reinvigorate one of horror’s best series.

The franchise was last seen on the big screen way back in 2013 with the release of Fede Álvarez’s remake. His Evil Dead was a gory delight, abounding in practical gore effects and heaps of committed performances. Rise will be arriving nearly a decade later, and it truly couldn’t come soon enough.

What do you think of the image? Are you excited for more Evil Dead? Let us know on Twitter via @dreadcentral so we can speculate until our eyes roll over.