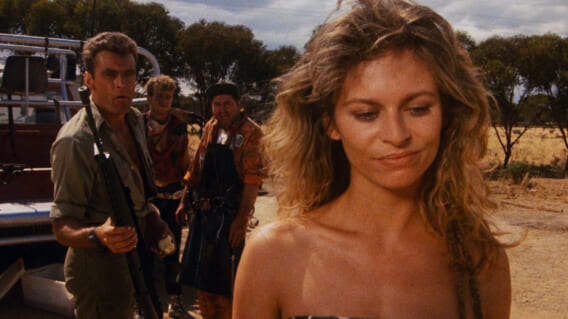 Fair Game is a rip-roaring good time that hits the ground running. It goes from zero to sixty in about three minutes. And there’s something to be said for that. This Ozploitation effort isn’t trying to make a meaningful statement or function as a work of living art. The film’s primary purpose is to deliver white-knuckle entertainment. And on that level, it succeeds fairly well.

The picture follows Jessica (Cassandra Delaney) as she locks horns with a trio of poachers hunting kangaroos in her wildlife sanctuary. Jessica initially crosses paths with the unsavory characters during a dramatic road rage incident. And matters only escalate from there. With no one to count on but herself, Jessica stands her ground against the hunters and fights to protect herself and the animals in her care.

The film’s premise is relatively simplistic and essentially plays out as 90 minutes of cat-and-mouse, with the roles reversing in the home stretch. But it’s a relatively effective revenge actioner.

A lot of the film’s success can be attributed to a likable protagonist. Even though Fair Game doesn’t feature a lot in the way of character development, positioning Jessica as the operator of an animal sanctuary makes her immediately sympathetic to viewers. Without a great deal of effort required, she is established as the pure-of-heart heroine fighting back against injustice. It casts her in a sympathetic light and establishes just how heinous her adversaries are. To ruthlessly torment a young woman whose world revolves around caring for defenseless creatures is a different kind of evil.

In spite of her circumstances, Jessica isn’t one to back down from a fight. In fact, she is a fearless protagonist who refuses to cower in fear when pursued by unsavory types with violent designs. She makes a conscious decision to confront her aggressors head-on and continues to do so, until the bitter end. Her path to victory is grueling and arduous. The action sequences are primarily well-staged and the chase sequences are intense.

My only complaint is that the film can be a little uneven at times. A sequence will build to the point of being harrowing, only to cut to a new scene before the potential of the previous ordeal has been fully realized. And that did offset my overall enjoyment. It reads as if director Mario Andreacchio didn’t quite grasp how to leverage each sequence to its full potential.

Case in point: The action breaks and Jessica returns home to shower multiple times during the ordeal. And I could almost understand if these were steamy shower sequences. This is an exploitation effort, after all. But they are not sexy showers. So, their insertion feels rather puzzling. And that takes a certain toll on the pacing, as well as flying in the face of logic. When pursued by a trio of madmen, one certainly has higher priorities than getting clean for a second or third time, no?

With that said, the action comes early and often and the retribution sequences are noteworthy enough that some of the peculiar choices can be easily overlooked. After all, one of the chief objectives of exploitation cinema is to entertain. And Fair Game certainly succeeds on that level.

Fair Game would eventually go on to inspire Quentin Tarantino’s Death Proof. And it’s easy to see this film’s influence in the auteur director’s contribution to the Grindhouse double bill. Though the finer details are quite different, you still have a woman (or women, in the case of Death Proof) in peril at the center of each story. And in both cases, the woman or women are pursued by a creep (or in the case of Fair Game three creeps) in a fancy automobile. Both stories eventually find the tables turned on the aggressor(s) in a harrowing denouement.

Naturally, Tarantino’s take on the subject matter is a bit more artfully packaged and features fewer gaps in logic. But that’s no reason to sleep on Fair Game, which is enjoying a theatrical re-release, courtesy of Dark Star Pictures starting July 8, with a digital release planned to follow July 12.

The action sequences in this exploitation effort are effective enough to offset the picture’s shortcomings.