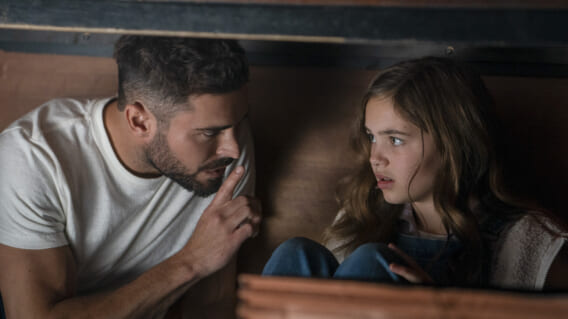 Witnessing Blumhouse/Universal’s new interpretation of Stephen King‘s 1980 novel about a young girl with pyrokinesis is akin to watching a dragon devouring its own tail. Firestarter—and King— laid monumental influence on pop culture over the past forty years. They helped establish the trope of the extraordinary young person placed in a powder keg. It’s an especially exciting cocktail because we understand there’s nowhere for the characters in worlds like these to go except up upwards into explosive destruction. This satisfaction is also present in Keith Thomas’s latest fiery vision of adolescent revenge.

But it’s just a shame that it somehow finds itself in the shadow of another property that blatantly exploited the system established by Stephen King’s 1980 novel: Stranger Things. The Netflix series, now headed into its fourth season, has all but lifted its secret weapons from Firestarter and its young protagonist Charlie. Unfortunately, the Scott Teems and Keith Thomas reimagining feels blatantly green-lit in its aftermath. A full circle of uninspired self-consumption.

Firestarter (2022) hails from a team of note-worthy talent. Thomas helmed the extraordinary debut feature The Vigil in 2019. It’s a brooding tale of a supernatural horror plaguing an Orthodox Jewish community. Teems was brought in by Blumhouse to write the screenplay for this new adaptation. Here’s where things begin to unravel. While I was one of a few apologists for Halloween Kills (another Teems-penned effort), that too was a project plagued by its rushed plot and an unending list of baffling choices made by its characters.

Firestarter is a film that would’ve benefited from at least another thirty minutes of runtime. Its quick pace soon left me irritated by how conveniently the scenes were able to run into one another. How does Charlie (played by Ryan Kiera Armstrong) make it from point A to point B? It’s rarely explained, leaving the film with a constant feeling that it was rushed or possibly massacred down to size in an editing suite. Kurtwood Smith appears for a total of thirty seconds before disappearing completely. This did not feel as though it was by design. It was yet another example of how strange, silly, and rushed the film is.

Also Read: Why Charlie Can’t Come: The “What’s Happening to My Body” Book for Firestarters

By this point, whenever I see a film was produced by Akiva Goldsman, my back goes up. This producer was also attached to The Dark Tower adaptation which condensed eight epic Stephen King novels into one puny, ineffective 90-minute runtime. A similar crime was committed by Goldsman and his team on Firestarter (2022). I surely hope this bad behavior against King does not go unnoticed this time around.

While there may have been a handful of red flag talent helping to work against this reimagining from the beginning (Teems and Goldsman, to be specific), there is one legacy King collaborator here that helps to improve this film considerably. John Carpenter (who nearly directed 1984’s first cinematic adaptation) has composed an epic, swarming and electric score here alongside Cody Carpenter and Daniel Davies. The hot, fiery pulsating music performs miracles on this otherwise lifeless reboot. The music nearly resurrects this film to the point of full-blown watchability. It’s a spectacle to behold. Carpenter and friends were also responsible for much of what energized Halloween Kills. It’s clear that this team of musicians understood the assignment in a way few other creatives involved did.

Excellent score and promising performances aside, Firestarter (2022) is still a creative furnace completely cold to the touch. Don’t get me wrong, there is fun to be had with this lean and often surprisingly violent adaptation. However, its fast pace comes across as definitely rushed. There’s way too much plot fitted into a relatively short runtime. This made the entire film feel disjointed and even silly at times, especially during its the final act. It’s also sad to see Stephen King chewed up by a zeitgeist that’s now begun to outpace his own properties. It’s Stranger Things‘ world, and unfortunately, Firestarter (2022) is just living in it.

Watching ‘Firestarter’ (2022) is like witnessing a snake rushing to devour its own tail. Piecemeal and self-serious, this new fiery vision of revenge feels all but green-lit in the aftermath of ‘Stranger Things’; a full-circle moment of uninspired self-consumption.