Including Julia Ducournau’s ‘Titane’ and David Bruckner’s 'The Night House'. 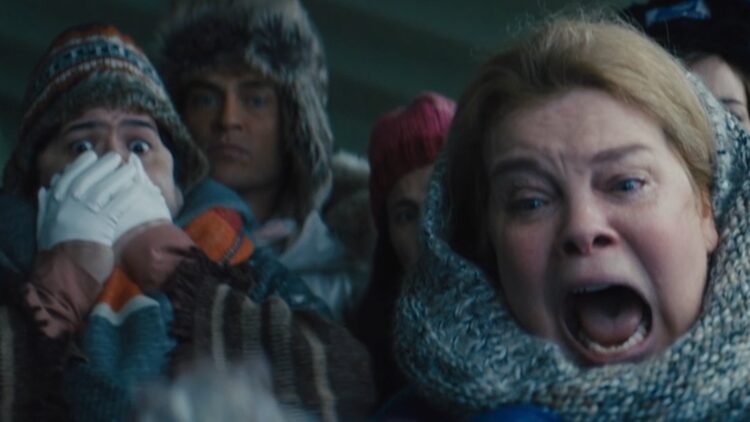 I find myself using the term too much lately, but the past twelve months were truly an embarrassment of riches for genre cinema. From controversial heavy-hitters like Halloween Kills to triumphant indie returns like V/H/S/94, this past year has spoiled us beyond recognition. It was a true cornucopia of terror that couldn’t have possibly arrived at a more opportune time.

So, if 2020 tooketh away, then 2021 hath truly giveth back. The following list represents a holistic view of my year in horror; individual pie slices, that when pieced back together, create a nasty, messy and barbaric dessert, completely unfit to serve.

Don’t Say Its Name may secure a place for itself in the Canadian horror lexicon, next to classic titles like Cube and Ginger Snaps. It’s charming, scary, and has got its thumb firmly on the pulse of Canada’s disastrous environmental crisis. Directed by newcomer-to-watch Rueben Martel, this heartfelt horror show features a snow-buried Indigenous community under attack by Big Oil and a violent and invisible phantom. Dueling leads Mary Stonechild (Madison Walsh) and Stacey Cole (Sera-Lys McArthur) tango with hot, magnetic energy into this thoughtful and chilly snow globe.

Josh Ruben and Mishna Wolff’s adaptation of Ubisoft’s Werewolves Within, a first-generation VR game, resulted in something altogether unexpected. The entire cast is built out of the most talented underdogs you could have ever hoped to dream up. From superstars Sam Richardson and Sarah Burns to prestige players Michaela Watkins and Cheyenne Jackson, this all-hands-on-deck ensemble brings the horror-comedy to life like some book out of The Pagemaster. While the ending might leave you hungry for seconds, the relentless laughs in this snowy Punch and Judy puppet show reek of future classic material.

To get reductive, Nia DaCosta’s Candyman was a true mood. The constantly impressive and aesthetically forward arthouse vibes of this reboot open palm you across the face so you’re wide awake as the scares pull you under the car. The runaway secret weapon of this exciting and scary horror show is Teyonah Parris’s turn as character Brianna. While she was not utilized as much as I would have preferred, I’d be fascinated to see a follow-up surrounding Brianna and Candyman. Now there’s a gothic romance for the history books.

Jewish anxiety is real. I come from a lineage directly impacted by Auschwitz and the death camps of the Second World War, so I’ve got first-hand experience navigating the gruesome horrors of generational trauma. Partly because of this, I recognized the relentless tension in Emma Seligman’s jaw-dropping Shiva Baby as something more than mere coming-of-age exhaustion. This is a non-traditional horror movie about the crushing expectations of community. Star Rachel Sennott also delivers the best performance of the year, horror or otherwise.

Nothing is my greatest fear, and I know I’m not alone with this one. Nothing, emptiness, zilch, nada… it’s all akin to our crushing, existential fear of the unknown. But, as The Night House hints to with jarring slow-burn terror, there’s always something out there in the nothingness. The Night House acts as a perfect introduction to the newfound Master of Horror David Bruckner, who first popped off with Netflix creepshow The Ritual. Next up for the mighty terror talent will be Hulu’s forthcoming Hellraiser reboot. And I think The Night House perfectly proves that this guy is a correct choice for the gig. Rebecca Hall’s performance elevates this selection into the realms of never-to-be-forgotten prestige horror.

Julia Ducournau seems determined to punish her audience. And honestly, lucky us. Her second feature Titane is an outrageously violent kaleidoscope sure to turn the stomach of even the most seasoned horror fan. The grotesqueness of Titane is eerily matched by its emotional vulnerability, something that takes until the third act to really come into focus. Vincent Lindon has a spectacularly emotional turn in this shocking thrill ride and even ends up stealing the show. Do not sleep on this nasty French epic.

Don Mancini is a horror hero. He has done what was previously believed as an impossible task: adapting a beloved legacy franchise into a top-shelf network series. And on SYFY no less.

While my tower feels lonely, I have been ringing the bell about both Curse of Chucky and Cult of Chucky since these titles were released in 2013 and 2017 respectfully. These late-game Chucky entries also performed impossible tasks: seamlessly stitching queerness, humor and horror in a way that never discredits the heart of the story, but constantly furthers it. Chucky picks up the mantle where Curse and Cult left off, and why not find yourself a girl who can do both?

And speak of the devil. The secret weapon of Chucky is Lexi, played thoughtfully by Alyvia Alyn Lind (Transparent). Chucky sees torture as an art form, and Lind’s Lexi takes this to heart, resulting in moments of pitch-black adolescent horror. However, it’s her relationship with her younger sister Caroline that showcases why this character and series are so important.

“How do I know who’s answering my prayers?” Frederic asks in the final act of The Righteous. “Can you tell me what the voice of God sounds like?”

This question sits squarely at the core of Mark O’Brien’s haunting debut. It’s not so different from when Insidious posed the question: What if it’s not the house that’s haunted? It’s a hook utilized so often in modern horror that it can sometimes become cliché. Not here. The Righteous subverts the proverbial “call from inside house” trope in ways I never saw coming.

The Righteous stars Henry Czerny (Ready Or Not) as Frederic and Mimi Kuzyk (TV’s Shadowhunters) as Ethel. Together, they expertly portray a mature couple who have just suffered the loss of their young adopted daughter. Frederic, who is no longer a man of the cloth, asks the film’s first important question: “Have you ever considered that you weren’t even with God?”

In my four-star review for Nightmare Alley, I compared the complexity of Guillermo del Toro and Kim Morgan’s screenplay to the mechanisms of an old German clock. There are just so many moving pieces working in tandem here towards an implicit common goal: self-destruction. Stanton (Bradley Cooper) dangles from the film’s precarious minute arm with equal parts desperation and confidence, you won’t ever know if you’re rooting for him to hold on or let go.

Like Shiva Baby, del Toro’s latest is not a traditional spook show. This time around, the visionary director has folded the fear into pockets you forgot that you had. The frost-bitten horror of Nightmare Alley is varnished across every mahogany surface. There is no redemption to be found, no solace, no moments of comfort. Only cold regret.

This grand spectacle utilizes the snow and the cold to its advantage at every turn, reminding us why winter is both the most brutal and beautiful season. Happy new year.