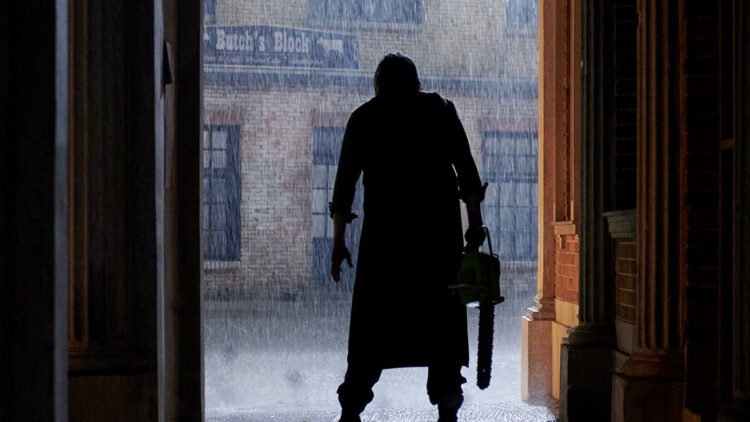 He’s here, folks. Leatherface is back and soon the saw will be unleashed on a whole new crew of unsuspecting victims. Today we’ve got our hands the first images from the forthcoming Texas Chainsaw Massacre sequel.

We also have an official release date, and some fascinating insight from the creatives involved thanks to Entertainment Weekly.

You’ll remember horror producer Fede Álvarez from directing the Evil Dead reboot in 2013 and from creating the divisive Don’t Breathe franchise. The shockhouse filmmaker is back on the scene by producing Texas Chainsaw Massacre, a direct sequel to the original Tobe Hooper joint.

Directed by David Blue Garcia and written by Chris Thomas Devlin, the all-new entry into the Texas Chainsaw cannon is sure to be a brutal romp. When asked about by the project by EW, producer Fede Álvarez had this to share:

It felt familiar somehow because it took us back to when I did Evil Dead — Me and Rodo really wanted to make sure we don’t disappoint the fans, and we are [among them]. So it’s pretty hardcore. But at the same time it has the simplicity of that first film. We wanted to come up with a very simple premise [with] a powerful domino effect. Everything is set up in the right place — all you have to do is push the first domino and everything will happen effortlessly.

The cast for the new film features some exciting Hollywood newcomers, including Sarah Yarkin, Elsie Fisher, Nell Hudson, and Jacob Latimore. They play a group of young people who accidentally find themselves off of the main road while traveling away from the big city.

Fisher, who had Oscar-buzz surrounding her performance in Eighth Grade, had this to share about the forthcoming horror film:

The film takes place a long time after the original Texas Chainsaw. It’s about a group of people who come to this town and things don’t quite go as planned. It mixes a lot of important real-life issues with horror themes, which is always something I love.

Following the trend of David Gordon Green’s Halloween series and the upcoming Scream reboot, Texas Chainsaw Massacre will be a direct sequel to the legacy original. Yet… will also keep the same title. We see you, Hollywood.