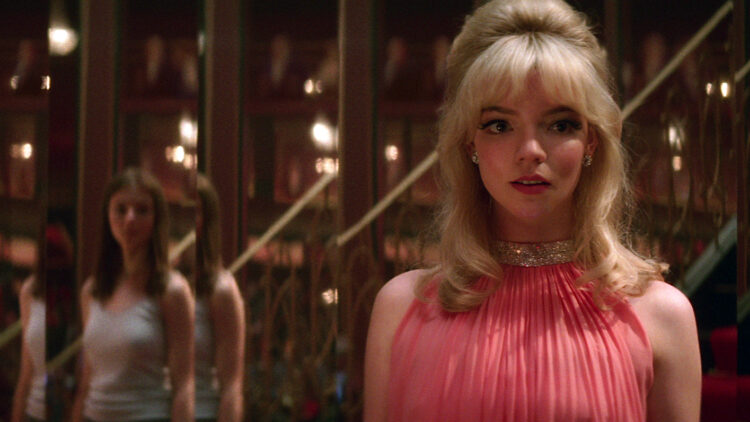 Thomasin McKenzie as Eloise and Anya Taylor-Joy as Sandie in Edgar Wright’s ‘Last Night in Soho.’ Courtesy of Focus Features

Last Night in Soho is about ghosts, certainly in the explicit sense. As a quasi-clairvoyant with nebulous supernatural awareness, Thomasin McKenzie’s Eloise “Ellie” Turner sees the ghosts of the past in mirrors and behind locked doors, in encroaching shadows and dimly lit alleyways. Last Night in Soho is about those ghosts, yes, but it is just as much– in its very soul– about the ghosts of our own identities, the parts of ourselves we kill, sometimes simply to survive.

Wildly misunderstood, Last Night in Soho’s ending is a cathartic inferno. The parts of ourselves we killed are resurrected. Sometimes, they’re ugly, noxious parts on account of so many years tucked away, rotting corpses of things we’d hoped might stay dead forever. They return, though. It’s from the reconciliation of current and past selves that healing begins. Just as ghosts are omnipresent, spoilers will follow here. They hang around, almost by design. Be forewarned.

Ellie Turner is an aspiring fashion design student, one grimly, almost liminally, stuck in the Swinging Sixties. Her mother was similarly interested in design, though she died by suicide during Ellie’s childhood. Ellie is thus haunted by both her memory and the very real manifestations of her waking self in her grandmother’s Cornwall home.

As she sways to the rhythms of Peter & Gordon’s “A World Without Love,” she opens a letter from the London College of Fashion (a real university, for those interested). She has been accepted. As she piles more Motown records than clothes into her luggage, her grandmother (Rita Tushingham) warns her to be careful. She is particularly concerned about Ellie’s clairvoyance and the risk a city like London poses.

Otherness drips from the periphery like black sludge. Ellie is steadfast in her commitment to making it work, never pantomiming what a London College of Fashion freshman should be. She wears her own designs, taps along to Dusty Springfield, and imbibes not on whiskey, but Pepsi Cola. Fundamentally, too, Ellie seems nonplussed by her clairvoyant abilities. Whatever ghosts may be, will be.

Like shards on a bedroom vanity mirror, the illusion is soon shattered. Ellie is immediately othered, cast aside quite literally to her freshman dorm’s common room. She endures taunts and jabs, unfamiliar competitiveness from her peers, and a growing, parasitic sense that the city does not want her. It rejects her. The adjacent, nameless persons, no doubt credited as “Person 1” or “Woman on street” are othered, too. They might be queer or people of color, encumbered by debt or grief, desperately endeavoring to fit their bodies into a city and lifestyle rotten and incompatible at its core.

Ellie is driven from her dormitory and takes a room in the loft of Miss Collins’ (the late Diana Rigg) residence in Goodge Place. The first night there, Ellie is transported into a lucid rendition of the past, a reflective stand-in for Anya Taylor-Joy’s Sandie, an aspiring singer in late ‘60s London, the woman who decades earlier occupied this same room. The flashing reds and blues of the adjacent French Bistro are hypnotic as Ellie slips away from her own reality into the body and mind of Sandie. She travels to the Café de Paris and relishes in Sandie’s Twiggy-pop style and ruthless, seductive ambition. She is no less attracted to Matt Smith’s teddy boy manager, Jack. By morning, the hickey on her neck matches the one Sandie got the night before.

Otherness is thus shed, an ostensibly curative act that does little beyond severing the already tenuous link Ellie has to what makes her intrinsically Ellie. She emulates Sandie’s style, going so far as to dye her hair blonde, and feigns confidence in her design class. She’s good, but not the kind of person to think so. Still, she trudges onward, accumulating consignment shop debt and restructuring her entire life around the identity of a woman she covets. She systematically seeks to bury every part of herself for something she deems better– something she thinks London might find more palatable.

Also Read: Why Edgar Wright Doesn’t Love The Return of the Living Dead

While London embraces the new Ellie, her own body rejects it. Her dreams grow more chaotic and the fairy tale mystique of Sandie is shattered. Sandie is coerced into prostitution, and Ellie watches night after night as she is abused and commodified, her Petula Clark aspirations morphing into nebulous dreamscapes no different than Ellie’s. Soon, Ellie witnesses what appears to be Sandie’s murder at the hands of Jack. The final act of Last Night in Soho is a plea for reclamation. Ellie is further isolated as she attempts to solve the decades-old murder, though she remains committed to both the truth and her gifts.

Just as she is about to give up, Ellie returns to Miss Collins’ home and the truth is revealed. Sandie isn’t dead– Jack and all the men are. Miss Collins is Sandie. Men with forms like ghosts haunted her every waking moment, taking advantage of her body and links to Jack, her desperation to fit in and make it all work somehow. Their bodies are in the house, hidden in the walls and buried beneath the floor. For a beat, Sandie looks to silence Ellie. Sandie drugs Ellie, stabs her quasi-boyfriend, John (Michael Ajao), and attempts to stab Ellie. Ellie escapes upstairs as a fire consumes the sitting room, ignited by a rogue cigarette (allusions to Jack Cassidy). There, she is assailed by the ghosts of the men Sandie killed. They plead with her to set them free– they plead with her to kill Sandie.

Ellie, though, won’t do it. She understands Sandie, and beneath the years and layers of other selves, she sees who she truly is. Sandie sees the ghosts, too, and in her final moments, concedes to death. She lets Ellie escape as she sits on her own bed, the raging fire swirling around her, certain to consume her.

Early assessments labeled the ending as sexist. For the preceding duration of Last Night in Soho, Sandie was a victim, an antecedent for Ellie’s isolation and otherness. It was certainly a brazen pivot, even for just a beat, to shift sympathies and render her monstrous. But that’s not what writer/director Edgar Wright really does. Last Night in Soho doesn’t ask the audience to punish or indict Sandie. It asks them to forgive her.

The systems of the past and the parallel structures of the present rejected both Sandie and Ellie. Different in form, though bedfellows in consequence, both were punished and rejected. They’re told that their bodies and their identities weren’t enough. They needed to be what London wanted them to be. A profound meditation on depersonalization and the shadows of ourselves we hide for survival, Last Night in Soho is curative. Enamored by a newer, fresher otherness, the concealment of identity only causes pain. It causes death. Yet, in the wake of an inferno, buried among the ashes, a new, truer self might just be born. That’s a tune worth swinging to.