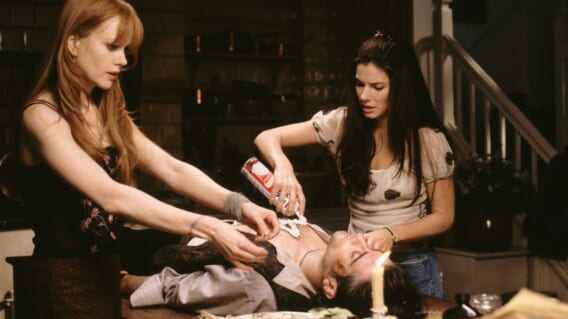 Autumn is here. And for fans of the macabre, that means it’s time to plan out (at least) a month’s worth of seasonally appropriate programming. Since the average horror enthusiast watches scary movies 365-days a year, it can be tricky to refine the perfect seasonal playlist. But because I aim to please, I am making a handful of suggestions I think might scratch that itch.

This list won’t feature obvious choices like Hocus Pocus or Halloween (1978). Those films absolutely channel the essence of fall. But if you read my weekly column, The Overlook Motel, you may remember that I prefer to sing the praises of less celebrated efforts and titles a little farther off the beaten path. On this fine October day, I have assembled a collection of autumnal efforts that serve up seasonal vibes but may not be as celebrated as some of their contemporaries. So, read on for my top five picks!

In spite of being one of Tim Burton’s most atmospheric efforts, Sleepy Hollow seems to frequently get overlooked in favor of other seasonal fare. And that’s a shame because Sleepy Hollow is dripping with the essence of autumn. The trees shedding their leaves and making a bed of yellow and orange on the forest floor makes we want to shovel pumpkin pie down my gullet and sit by the fire with a cup of hot chocolate. If it has been a moment since you last revisited Sleepy Hollow, this spooky tale of serial decapitation in an idyllic community is sure to get you in the mood for fall.

This underrated collection of vignettes is among my favorite anthology films of recent years. The project is the brainchild of renaissance woman Axelle Carolyn (director of The Manor) and sees a talented team of creators each contributing one segment. Every vignette is set in the same locale and takes place on the same evening. As with any anthology, some segments are stronger than others. But there isn’t a bad effort in the bunch. Moreover, the collection serves up ample autumn vibes. But even if you haven’t seen Tales of Halloween, you likely could have gathered that from the title.

While this tale of sister witches battling an ancient curse was written off by the majority of critics at the time of release, there is still plenty to appreciate about Practical Magic. The sisterly bond between Sally (Sandra Bullock) and Gillian (Nicole Kidman) reads as authentic. The set design and atmosphere give off serious fall energy. And portions of the picture even take place during the Halloween season. While Practical Magic may not get everything right, it is an integral part of my seasonal viewing lineup. So, I urge you to give it a chance, in spite of its abysmal critical reception. What’s more, in spite of some spooky subject matter, the film is still relatively tame. So, this is an effort you can share with the entire family.

I won’t deny that Night of the Demons has a fanbase. It certainly does. But I’m not convinced this 1988 effort is as celebrated as it should be. The flick sees a group of friends attending a party on Halloween night. But this isn’t any costume party. No, no. This party is being hosted at Hull House, an abandoned mortuary with a sordid past. When the partygoers decide to host a séance, everything goes to hell in a handbasket. Everything from the character’s costumes to the set design make this an atmospheric selection for autumn viewing. So, keep that in mind when orchestrating your October watchlist.

Halloween III: Season of the Witch

I said I was going to hit you with less obvious suggestions. And I have been trying to do just that. But I had to include at least one selection from the Halloween cannon. And I think, in spite of being part of a beloved franchise, Halloween III is still among the most underrated and unappreciated of the series. Until about ten years ago, this standalone entry was maligned and written off for shifting the narrative focus away from the storyline explored in the first two films. But if you can get past that (as many have finally managed to do) this installment unfolds in the days leading up to Halloween and harkens back to the pagan holiday, Samhain. If this flick isn’t part of your fall playlist, maybe it should be. Seriously.