It's Steven's world and we're just living in it. 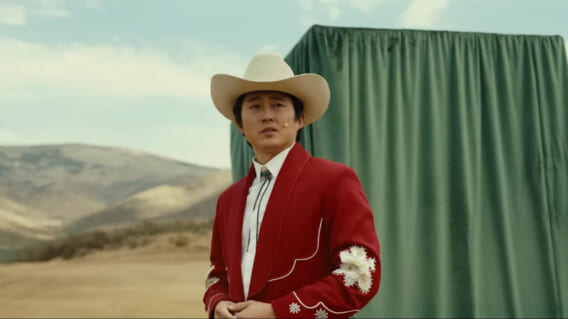 Now that Nope is on VOD, I thought it was time to talk about one of my favorite topics: the powerhouse known as Steven Yeun. Steven has been a favorite of mine since his first episode of The Walking Dead, and he loves to pop up in the genre. Which I love because that is where I live and can now dedicate a Dread Central listicle to him. I volunteered as tribute to rewatch a good chunk of his resume and figure out the ranking of his performances. To be clear, he is always a moment in whatever the project is. However, some stand out more than others. Now follow me as I nerd out about one of my favorite actors working today!

A family comes together for Thanksgiving in a creepy Manhattan apartment. Things get a little more unsettling throughout the evening as tension runs high. The Humans did not register as horror at first, and it is an ensemble piece that never really allows anyone to be the main focus for too long. However, Yeun finds ways to deliver as usual. The movie is an adaptation of a play. This is possibly part of the reason for so many wide shots with an emphasis on the big picture. The moments we get time with Richard remind us why Yeun makes us want him and A24 to team up again though.

A virus hits an office building and makes the yuppies inside even worse than usual. Yeun’s Cho is the most likable of his colleagues, and we end up rooting for him as he makes a bloody path to his boss. It was the first leading role in the genre for Yeun, and we knew it would not be the last. His co-star is Samara Weaving, who is another favorite of mine and also too damn cool for school. May they work together again soon because my wallet is ready. It is bloody, it is funny, and it makes me happy that I am no longer in an office environment. If you want more time with Steven, Shudder offers a version with Yeun and Joe Lynch doing commentary. We all want more time with Steven, so go ahead and hit play. I’ll wait…

Rick Grimes wakes up from a coma to a zombie apocalypse. He immediately begins leading a group of survivors that includes Glenn Rhee. This was the first place a lot of us saw Yeun. He immediately started impressing us amid a cast filled with favorites and became the heart of the show. This is why when his character was killed off most of us lost our collective shit. I remember starting the episode thinking things were fine and I emerged a different and somehow more damaged person. The show is still going but it has never been the same which is a testament to the character and the actor.

3. Sorry To Bother You

Where You Can Watch: Hulu and Netflix

A telemarketer climbs the ladder to success and finds a very chaotic world awaiting him. While the telemarketer is doing that, Squeeze is having a lot of chemistry with his girlfriend, Detroit. I would watch Tessa Thompson and Steven Yeun spin signs at each other for the rest of my life. I also own that Thompson, Yeun, and LaKeith Stanfield’s characters are in the only love triangle I will ever care about. Yeun shines and twirls signs as the odd, distant co-worker that we all lean forward for. The movie is wildly chaotic, and the performances match that energy making this one of the most fun movies on Yeun’s genre resume.

2. The Twilight Zone (Episode: A Traveler)

Where You Can Watch: Paramount+

A rando shows up at an Alaskan police station and turns the town against each other. I was already living for Jordan Peele’s The Twilight Zone, and then he kicked it up another notch by giving us a creepy alien played by Steven Yeun. Seeing Yeun play the mysterious rando that is clearly up to something is the turn I did not know I needed. He gets to use his natural charm to infiltrate this town of liars and make the audience almost forget he is the enemy. Yeun does it as effortlessly as most of us react to Tweets we like. When I welcome people to the Yeun fan wagon, this is one of the first stops on the tour we make.

People in a quiet California town witness something fantastical that shakes up all of their lives. I love this whole cast, including people I only discovered in this movie. Steven Yeun’s Jupe almost has separate chapters of this movie that feels like a novel I need. His character is dishonest, traumatized, likable, lost, and in way over his head. Yeun takes every turn like a professional Mario Kart player on a Wednesday afternoon. Not only does he attempt to steal every scene he is in, from a group of scene thieves, but he does it while enlisting us in the yeehaw agenda. I hate the phrase “career highlight,” but this is definitely what this is. This is the glow-up and confirmation all of the fans who started stanning during The Walking Dead thought we got so many performances ago.

Let me know your favorite Steven Yeun appearance in the genre at @misssharai.