‘The Humans’ Is A Horror Movie — Here’s Why 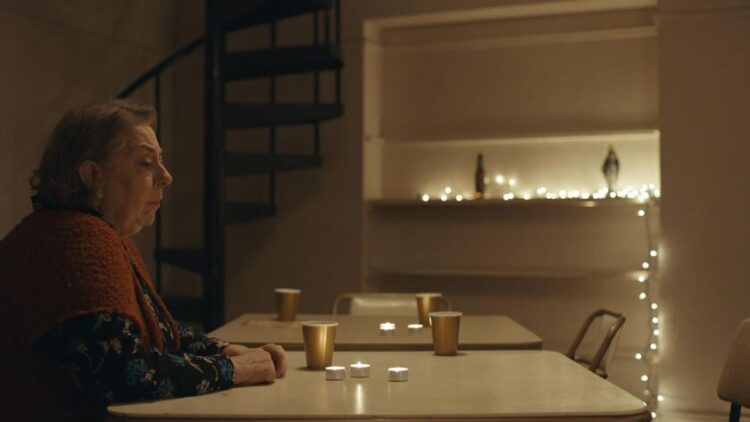 The Humans (2021) is a film about a family who comes together on Thanksgiving night. They celebrate the holiday as well as the youngest daughter and her boyfriend’s new apartment in the city. It’s a perfect example of slice-of-life cinema. We view a family in a very natural state throughout their togetherness. They exchange gifts, catch up with each other, share some gossip, prepare a feast, and have a few drinks. What’s so horrific about that? There are films that use familial gatherings as means to express comedy or create warm, cozy feelings. Director and writer (based on his play) Stephen Karam had other plans for this family.

There’s been online debate on whether The Humans should be considered a horror film. The New York Times posted an article pinpointing The Humans and other recent releases that can be considered horror. Horror can be whatever the viewer chooses to interpret as horror. As for The Humans, the horror lives within each family member’s psyche. It presents itself through the anxieties, trauma, and discourse that lingers around them. Instead of a physical or corporeal manifestation of a horror villain, Karam’s horror villain is the unseen forces created by the family when they’re all together.

Each member of the family has their own demons. Brigid (Beanie Feldstein) is dealing with the fact that she may never be good enough for her parents. Aimee (Amy Schumer) just lost her girlfriend and her job as well as having to deal with ulcerative colitis, a debilitating disease. Momo (June Squibb), the grandmother, is catatonic due to her dementia. Although loved by the family, she appears to be more of a nuisance to them than anything. Deirdre (Jayne Houdyshell), the mother, is haunted from the beginning. Yet, there’s always a determined spirit about her to alleviate any tension that builds. Erik (Richard Jenkins), the father, is holding a secret that could destroy the entire family once it’s spoken. Richard (Steven Yeun), Brigid’s boyfriend, just wants acceptance from Erik and Deirdre and reaches for that acceptance at every chance he can.

Much like a film’s villain, these aspects of the characters hover around and within them, constantly stalking them. Within the few hours that the family is together, it slowly sucks the love out of the gathering. It creates diluted chaos, throwing what should be a loving night into a spiral of defeat. This may be a bit of dramatics, yet isn’t this a general consensus of how a lot of families can be when placed together? A dark mass can hover over the loving portrait that a family can falsely create. Karam takes the time to paint his own portrait of that dark mass. This gives us the film’s antagonist.

This doesn’t stop Karam from giving us false hope of an actual manifestation of the villain. The apartment, where 100% of the film takes place, seems to be haunted. Beginning within the first moments of the film, we hear noises from upstairs. Lights going out, doors creaking open, water bubbles on the wall, and different machines in the building suddenly starting all attribute to this. It seems that the more an anxiety wants to rear its head from within a character, the house responds with one of these quirks. It’s almost as if the apartment is presenting itself as a character – an aspect of the eventual villain – but instead, is just a response to the villain.

When a family member begins to open up, the placement of the camera is always on the outside of the room, peering in around a corner. It’s outside, looking in through a window. It’s down the hall, looking in. This metaphysical eye of the villain is how we view the family when these anxieties arise. It’s the viewer’s way of knowing that it’s attacking the family, and we see the family respond with heightened emotions.

This truly kicks in at the beginning of the third act once Erik reveals a secret to the family that begins to tear them apart. Once the patriarch reveals his infidelity, the family disperses. It’s time for the night to end. Some of them have run to the rooftop in response to Erik’s secret. The others are preparing for a car to pick them up outside. It’s here that the anxieties from the entire night begin to really amp up the tension.

Earlier in the film, Erik speaks of a woman that is present in his nightmares. All of the orifices of her face are sealed over with skin, and she’s always looking back at Erik. With this description of the “faceless lady”, as his family deems her, we think that this is what’s going to present itself as the physical antagonist. It is during the film’s finale that she should show up.

She doesn’t show. Instead, we’re left with Erik being bombarded with all of the apartment’s aforementioned quirks going into overdrive: the lights going out, the noises from upstairs, the random machinery making noises. It literally leads Erik to bend over a table and pray. The anxieties of his entire family, as well as his own, have completed this dark mass, and the apartment is aware that it’s time to make him pay.

But there’s no payoff. The faceless woman doesn’t appear. Instead, Brigid returns to the apartment to have him gather himself, and head down to the car. We’re left with a final shot of the shotgun hallway that leads to the exit of the apartment being illuminated from the light outside. Erik walks down the hallway, quietly, and exits. The door to the apartment slowly closes on its own behind him.

The ending solidifies that the atmosphere created by the family is the film’s big bad. What makes it really hit home is the fact that there is no resolution. The villain isn’t vanquished. What the family has been dealt will continue to haunt them. This is a mirror to what real life is. The moment that we walk away from a familial gathering doesn’t end the constant dread of what we will continue to face.

What makes us scary, though? One could laugh in response to that question, and just gesture to the history and current state of our world. It’s on smaller scales with seemingly innocent people that the answer to the question gets a little bit more personal. It’s with people that we love, are forced to love, or feign love for that it becomes all too real. Instead of viewing the scares via social media or news reports, the scares hover right above us. They linger right within us. That’s the villain that attacks us, and that’s the horror villain that was so properly displayed in The Humans.