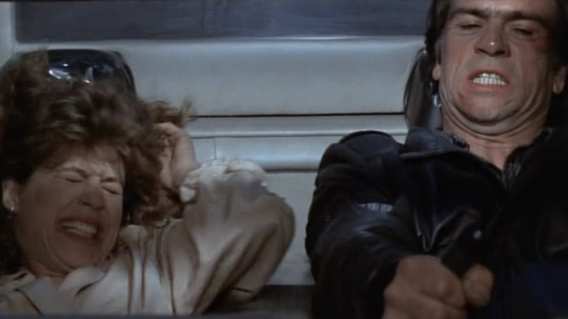 Allow me to begin this installment of The Overlook Motel with a disclaimer. This week’s selection, Black Moon Rising, isn’t a proper horror film. However, it is a science fiction/action hybrid that counts master of horror John Carpenter as one of its screenwriters. As such, this under-seen effort is noteworthy to this genre film enthusiast and therefore a logical inclusion for this weekly segment.

Black Moon Rising functions like a series of chase sequences weaved together to form a narrative. The flick sees Quint (Tommy Lee Jones) stealing a computer cartridge with crucial evidence related to a grand jury probe. When things get too hot, Quint stashes the evidence, which he has liberated at the behest of the government, in a futuristic automobile headed for Los Angeles. But when he reaches LA to reclaim the stolen property, Quint discovers that Nina (Linda Hamilton), a crafty car thief, has absconded with the vehicle and the evidence. Now, he must set out after the stolen car, retrieve the damning data, and find time to make googly eyes at Nina. But for our ruggedly handsome protagonist, it’s all in a day’s work.

Director Harley Cokeliss adapts Carpenter’s screenplay (which was cowritten by Desmond Nakano and William Gray) as a pulse-pounding, sci-fi-infused action film that feels something like Knight Rider meets Escape from New York. Like Escape from New York, Black Moon Rising features a fast-talking, tough-as-nails protagonist that must step in to assist the government with a sensitive matter. And like Knight Rider, there is a state-of-the-art, futuristic car at the center of the action.

Cokeliss serves up a number of impressive chase sequences that are likely to get your blood pumping. The director utilizes frantic editing and close-up camerawork that puts the viewer in the heart of the action. In one memorable exchange, Quint pursues Nina the wrong way down a one-way street, with cars coming towards them and both parties swerving in and out of oncoming traffic. Thanks to a constant supply of sequences similar to what I just described, there’s really never a dull moment in Black Moon Rising.

In addition to effective action sequences, the film also serves up an impressive cast of characters. In addition to Jones and Hamilton, it features Oscar-nominated thespian Richard Jaeckel (Starman), Lee Ving (who played Mr. Body in Clue, the year before), Police Academy franchise mainstay Bubba Smith, and Dan Shor (who would eventually play Billy the Kid in Bill & Ted’s Excellent Adventure).

See Also: ‘Chastity Bites’ is a Feminist Horror That Was Ahead of its Time [Watch]

Not all of the performances in Black Moon Rising are what I would call earth-shatteringly effective. But each of the key players is serviceable and Hamilton and Jones, although a coupling I may not have expected, generate effective onscreen chemistry. Their dynamic is initially one that sees the duo at odds with one another. But they eventually come to realize they are both interested in doing the sex together. While we have seen a variation of that setup used plenty of times, it is put to effective use here. The central relationship combined with the breakneck pace of the narrative makes this film is a whole lot of fun to watch.

Ultimately, Black Moon Rising is an action-packed affair that melds science fiction and action to serve up a satisfying viewing experience sure to appeal to fans of genre film. So, if you’re down to check it out for yourself, you can stream Black Moon Rising free of charge via Tubi, Pluto, or Plex, as of the publication of this post.

If you are keen to chat more about under-seen and unloved films, feel free to hit me up with your thoughts on Twitter @FunWithHorror!