This horror comedy is primed to take down the patriarchy! 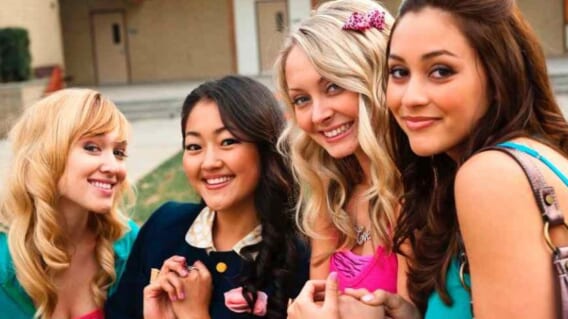 I am pleased to be championing John V. Knowles’ Chastity Bites on this installment of The Overlook Motel. It’s truly a film ahead of its time. But I think audiences may finally be ready for it. The picture’s narrative is progressive and feminist, taking care to subvert both gender roles and horror tropes. Accordingly, this horror comedy is a true delight to watch.

The picture follows aspiring investigative journalist Leah (Allison Scagliotti), who grows suspicious when her high school rolls out a new organization dubbed the ‘Virginity Action Group’. Additionally, Leah believes the club’s leader Liz Batho (Louise Griffiths) has ulterior motives for organizing the group. The junior reporter’s instincts ultimately prove to be correct. In fact, it turns out that Liz has developed an anti-aging routine that requires a steady supply of virgin blood. With that knowledge, Leah sets out to save herself and her best friend Katharine (Francia Raisa) before they both wind up as sacrificial offerings!

As you may have gathered from the plot crunch, Chastity Bites is vaguely reminiscent of the thematically similar Cherry Falls and has a feminist energy that calls to mind contemporary cult classic Jennifer’s Body. Similarities aside, Chastity Bites charts its own course and stands as an impressive piece of feminist cinema. The flick is full of witty dialogue and isn’t afraid to take shots at the far right or the patriarchy. Accordingly, I think Chastity Bites was years ahead of its time. It’s commonplace to see progressive, feminist ideals in film now. But the picture was released nearly ten years ago, making it pretty groundbreaking in its messaging.

Also Read: ‘Not Safe For Work’ is an Unnerving Office Invasion Thriller

Also effective is the film’s desire to subvert genre tropes. And it’s not just the ‘virgin always lives’ cliché that’s subverted here. The flick also avoids pandering to the hetero male gaze by featuring no female nudity and even reveals Leah’s best friend to be a lesbian without tying her entire storyline to her sexual orientation or making her the first to die. Aside from some of the fashions being a bit dated, Chastity Bites almost feels like it could be a product of 2022, rather than 2013.

In addition to being ahead of its time, the film also benefits from a great cast of characters. Allison Scagliotti is smartly cast as Leah. She plays the lead character as down-to-earth, pragmatic, and eager to make a difference. Based on her turn as Leah, it’s no surprise that Scagliotti has had a prolific career in the nearly ten years since the film was released.

Also enjoyable is Eddy Rioseco as Leah’s love interest Paul. Part of Paul’s appeal relates to a solid script from screenwriter Lotti Pharriss Knowles (whose partner John was at the helm). Pharriss Knowles writes Paul as a feminist ally that doesn’t have to tell you he’s an ally because his actions speak for themselves. Though he is well-scripted, Rioseco brings the character to life with an ‘aw shucks’ sensibility that reads as authentic. Paul is also likable, in part, because he has a clear understanding that Leah is the star of the show and doesn’t need anyone to rescue her. And he seems happy to let her take center stage. But he’ always waiting in the wings to lend a hand should she need his assistance.

Also Read: ‘Not Safe For Work’ is an Unnerving Office Invasion Thriller

Ultimately, Chastity Bites is a thought-provoking horror comedy with a female positive message, solid dialogue, and noteworthy performances across the board. And did I mention the late Stuart Gordon makes a cameo as Leah’s journalism instructor?

If you’re curious to check the flick out, it is streaming on Tubi and Prime, as of the publication of this post. And if you’re a fan of under-seen cinema and keen to chat more, you can find me on Twitter: @FunWithHorror.