Horror is for all ages! 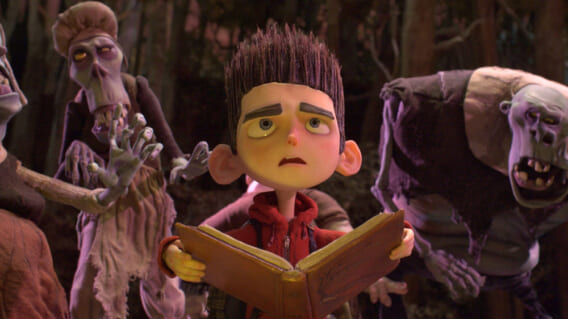 Horror is good for everyone’s soul. In truth, shared horror strengthens bonds. Nightmares and fears are mighty, illuminating creatures. They reveal the innermost workings of any given person’s loves, anxieties, hopes, dreams, and regrets. The person I am today, in fact, is in large part on account of regular horror screenings, with my mom excited to come home with a rental copy of Scream 3 or Darkness Falls (or Python) for every single one of us to enjoy. With horror, though, comes different barometers. What scared me didn’t scare my sisters, or vice versa. Resultantly, it can be difficult as Halloween rolls around to find that horror-loving sweet spot, a movie abounding in genre appreciation that isn’t going to risk weeks of sleepless nights.

In honor of yet another magical month of terror and mayhem, I’ve assembled a guide of some of the best family-friendly horror offerings around. A mix of something old, something new, and a healthy dollop of animation thrown in, these ten titles are guaranteed to incite genuine chills and bonafide familial bonding.

The Watcher in the Woods

Watch: DVD (because Disney Plus is really Disney Minus the Horror)

Based on the 1976 novel by Florence Engel Randall, The Watcher in the Woods sees two sisters—including horror mainstay Kyle Richards—enveloped in a supernatural mystery after moving to the English countryside. With a remarkably spooky Bette Davis, thick, sensational Autumnal themes, and some bonafide scares despite its Disney origins, The Watcher in the Woods endures 40 years later as a zenith of grounded, gothic gateway horror. Melissa Joan Hart directed a 2017 Lifetime remake. Yet, as with most things, audiences are better off with the original this Halloween, no matter how tempting Anjelica Huston’s involvement might seem.

Something Wicked This Way Comes

Much like The Watcher in the Woods, fans of Disney’s classic horror template will be remiss to hear it too is missing from the streaming service’s otherwise pretty remarkable assemblage of classic Disney fare. It’s a shame, too, since I’ve noted before just how top-tier Jack Clayton’s Bradbury adaptation is. Arguably one of the strongest pieces of gateway horror ever produced, Something Wicked This Way Comes has evil men in top hats, major Halloween vibes, and a spider attack that puts Arachnophobia to shame. While easily accessible on DVD, it’s a shame Something Wicked This Way Comes hasn’t yet, well, come to streaming.

Speaking of Bradbury, he conjures up sterling animated antics in his script for The Halloween Tree, a made-for-television adaptation released in 1993. The Halloween Tree follows a group of trick-or-treating friends and their quest to rescue one of their own from the wicked Mr. Moundshroud (Leonard Nimoy). Bradbury himself narrates several key sections, and as a brief foray into the history of Halloween, little else comes close. Frightening, fun, and remarkably poignant, The Halloween Tree deserves to be a seasonal staple.

The Legend of Sleepy Hollow

One half of Disney’s The Adventures of Ichabod and Mr. Toad, The Legend of Sleepy Hollow might be Disney’s most accomplished animated horror outing yet. A faithful adaptation of Washington Irving’s story, The Legend of Sleepy Hollow is terrifically frightening. Gorgeous hand-drawn animation augments every scene in living, breathing color. The musical interludes are top-notch, and Bing Crosby’s narration is soft as butter. While it has fewer severed heads than Tim Burton’s interpretation, it’s nonetheless the definitive adaptation of Irving’s work. It’s a must-watch this Halloween.

Nightbooks made me weep. David Yarovesky’s adaptation of J.A. White’s 2018 novel of the same name bears a lot in common with the forthcoming entry The House with a Clock in its Walls. By dint of producer Sam Raimi’s involvement, Nightbooks does veer toward more visceral horror than the PG space often sees. Some of these scares are intense, especially an extended pursuit in the third act. What elevates Nightbooks beyond simply being scary is its sheer admiration for the horror weirdo in us all. Protagonist Alex Mosher (Winslow Fegley) just wants to write scary stories and share them with the world. Come for the Krysten Ritter, stay for the tug at the Halloween heartstrings.

Over the Garden Wall

What else is there to say? I’ve already named Over the Garden Wall as a preeminent fall watch. Still, it remains all the better when watched with family and friends alike. Patrick McHale’s sensational work here is incredible. One of the best miniseries ever produced, it appeals equally to children and adults alike. It’s funny, tender, warm to its pumpkin, hayride core, and even has some truly nightmarish imagery for the horror fan who thinks they’ve seen it all before.

The House with a Clock in its Walls

While seeing Eli Roth’s name attached to PG, family-friendly horror fare might take some genre fans by surprise, that incredulity soon dissipates. Eli Roth’s The House with a Clock in its Walls, adapted from John Bellairs’ 1973 novel of the same name, is remarkably tender and, yes, at times tremendously frightening. Sure, Roth never quite reaches Hostel levels of savagery here (and for good reason), but his inimitable grasp on childhood fears is clear in abundance. There are possessed pumpkins, evil dolls, and a sinister Kyle MacLachlan. As a blending of horror and fantasy, The House with a Clock in its Walls overcomes some juvenile additions and emerges as a worthwhile, frightening foray into more mature horror.

It’s a shame Laika, the American stop-motion animation studio, remains a niche curiosity. While the likes of Coraline and Kubo and the Two Strings might be well known, their box office performance remains middling at best. Their adaptation of Coraline might be their bread and butter. Yet, it’s with ParaNorman, an original effort, that they achieve perfection. It’s an ode to the horror genre and outsiders everywhere. Norman Babcock’s (Kodi Smit-McPhee) journey speaking with the dead is tender, profound, and yes, genuinely frightening at times. Plus, the stop-motion animation is so immensely gorgeous, it’s a visual treat for even the most horror-averse families out there.

Scooby-Doo! and the Witch’s Ghost

Nostalgia might be winning out here, but Scooby-Doo! and the Witch’s Ghost is the definitive late nineties Scooby-Doo! outing. The Mystery Inc. gang travels to the small New England town of Oakhaven to meet with acclaimed horror writer Ben Ravencroft (Tim Curry). Sarah Ravencroft, an alleged witch executed centuries ago, returns to wreak havoc. As always, it’s up to the inimitable dog and his human sidekicks to save the day. Like most of Scooby-Doo!’s direct-to-video outings, the threat here is a bonafide supernatural phenomenon. While human malice is still at play, Sarah Ravencroft is a bonafide witch’s ghost, and she’s utterly terrifying. Add in goth-rock band The Hex Girls and you’ve got a terrifying Scooby-Doo! masterpiece, my friends.

I promise this one isn’t here by mistake. While Halloween is widely regarded as one of the scariest movies ever made (for good reason, Michael Myers rules), it remains uniquely accessible to the burgeoning horror fan. The lack of explicit violence alongside Carpenter’s uniquely calibrated tension renders it a steppingstone of sorts into more contemporary, visceral horror fare. While it won’t work for everyone’s family, it was one of the first I ever saw growing up. Though it scared me at the time, it similarly ignited an enduring passion for horror. Results may vary, though I encourage readers everywhere to check out Brian Kelper’s piece on the subject.

While there are many here that didn’t quite make the cut—The Addams Family, Casper, so many others—part of the joy of the season is that the breadth of horror stretches so far, there’s undoubtedly something for everyone. Go out there, find your family’s thing, and let the horror season wash over you.