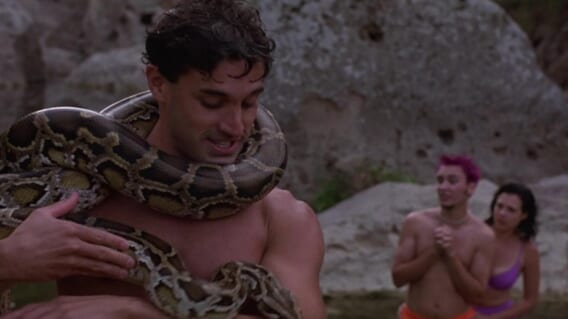 Sara Mornell killed a giant python and all she got was a stupid t-shirt. Richard Clabaugh’s Python has the enviable honor of just two critic reviews on Rotten Tomatoes, both negative, and over 5,000 audience scores, the average of which is a dismal 21%. It’s a slithering travesty, truly, since Clabaugh’s Python delivers exactly what a movie titled Python should. A giant, man-eating, computer-generated snake wreaking havoc in small-town America, barreling through a reputable assemblage of actors who, at the advent of their careers, likely never anticipated co-starring in a movie called Python. William Zabka, Wil Wheaton, Casper Van Dien, Jenny McCarthy, Robert Englund, and more feature, though the true star, of course, is the wholly nonrealistic killer Python.

Python released straight-to-tv in 2000. It was an early progenitor for the Syfy channel’s suite of Roger Corman-produced creature features. Roger Corman wasn’t involved in Python, though he was involved in the likes of Raptor, Dinocroc (another bonafide classic featuring some Lizzie McGuire trauma), and Supergator. Python, like future giant creature iterations, followed a strict formula. A genetically engineered (or mutated) reptile starts killing everyone in its path.

Concurrently, some hapless young adults are caught in the crossfire, usually encountering the scientists (or politicians, or developers, any human antagonist, really) toward the climax. The bad guys are killed, and all hope seems lost. But the young hotties manage a win, ostensibly stopping the threat for good. For what it’s worth, Python was followed by both a direct sequel, Pythons 2, and a crossover, Boa vs. Python. Boa, also known as New Alcatrez, was itself originally released to compete with the gnarly success of Python.

It’s a lot of snake goodness, and though strictly anecdotal, Python itself was likely conceived to capitalize on the success of Luis Llosa’s Anaconda. In the Philippines, Python was itself billed as Anaconda 2000. Python opens with a reasonably tense plane crash. The hapless crew doesn’t realize they’re transporting a mutated giant snake. What follows is a pretty progressive queer interlude. Granted, the two women who encounter the crashed plane are quickly dispatched by the giant snake, but for 2000, it supersedes merely burying its gays. Queer love is established as part and parcel of the small-town Ruby.

The core cast is then introduced alongside all their requisite interpersonal drama. William Zabka’s Deputy Greg Larston used to date John Cooper’s (Frayne Rosanoff) new girlfriend, Kristin (Dana Barron). The three of them spend an awful lot of time litigating a relationship that isn’t that interesting to begin with. Wil Wheaton and Sara Mornell co-star as additional friends (and bodies). Mornell is a real standout, featuring in the movie’s most effective set-piece.

She and Wheaton plan to go camping. While at her parents’ rural country house, she dips into the basement for an early morning shower. While there, the python breaks in, and Mornell remarks there’s a snake in the basement. “Dude, you got me out of bed for a snake?” he asks, right before said giant snake smashes through the door, killing Tommy. It’s truly incredible stuff.

All of which is to say that Python transcends its modest origins. Sure, it isn’t a masterpiece, but there’s enough goodwill to position it above its made-for-tv creature feature brethren. Python was released at a curious time in cinematic history. In the early aughts, horror struggled to break new ground. With the new century on the horizon, horror was in the midst of some growing pains, endeavoring to identify how to best transition to a new era replete with new sensibilities. Python is no classic, sure, but it’s a breezy creature feature with plenty of bite. Far from rotten, it delivers what the title promises. Fresh, funny, and savage when necessary, Python has teeth, and it’s more than willing to show them.