Heartbreak and Masterful Terror in ‘The Others’

"I am your daughter." 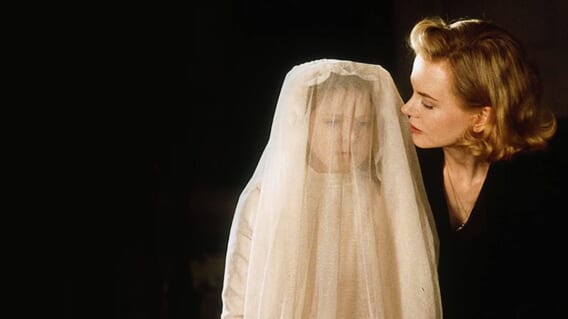 The Others isn’t just a ghost story. It’s a showcase for the inimitable talents of Nicole Kidman. It’s a heartrending meditation on motherhood. And it’s an exploration of faith. It’s kind of a war drama. And, take away the ghosts, it’s a gilded period piece replete with dusty corners and concealed motives. It’s also probably Alejandro Fernando Amenábar Cantos’ best film, no hate toward the likes of Thesis or Open Your Eyes. Rarely, it’s a horror outing that nudged itself into the public consciousness among the lates (The Innocents) and greats (The Sixth Sense, from which The Others borrows quite liberally at times). It’s melancholic, sketching its ghost story with the verve of Shirley Jackson or Henry James. It’s familiar yet entirely its own thing. In a remote house in Jersey, a modern classic was born.

In an interview with Nitrate Online upon release, Amenabar remarked wanting to bring The Others down to a human level. As ghost stories grew bigger (see: 1999’s The Haunting) and more spectacular, Amenabar narrowed his focus, tapping into a classic well that had endured for centuries. He goes on to say:

“I like to ask questions that are big to me, but have an audience ask them of themselves, in their own way. So, in the case of The Others, it has to do with death, and how religion gives meaning to death and the concept of destiny, and how it responds to not really knowing.”

Amenabar focuses principally on agnosticism, and overall, The Others is an agnostic film. For every answer unspooled in its climax, more are raised. Frightening possibilities are posed, shaking character and audience alike, only to be left unresolved. Relics of the past, it’s presumed that only time—or perhaps an eternity—will yield considerable answers.

For the uninitiated, The Others stars Nicole Kidman as Grace Stewart, a woman living alone in a rural Jersey estate with her two children, Anne (Alakina Mann) and Nicholas (James Bentley). Introduced through the pages of a storybook—“A long, long time ago, all the things – stars, moons, animals, and plants- didn’t exist. Only God did, and he created all those things”—The Others solidifies its meta-awareness. It is a story, first and foremost. In a different time, it might well be told from the frayed edges of a gothic storybook, a tale of the things that go bump in the night.

It’s not until the following morning the first “others” arrive in the form of Bertha (Fionnula Flanagan, directly in her element), Edmund (Eric Sykes), and Lydia (Elaine Cassidy). A trio of new servants, they’ve ostensibly been summoned by an advertisement in the paper after the previous housekeepers simply vanished. Expository in nature, Grace leads them through the house, outlining her distinct rules along the way. Every time a door is opened, the previous one must be closed in locked. Grace endures severe migraines, so excess noise must be kept to a minimum. Silence is prized. This is no electricity, no telephone or radio. When the Germans severed the power, the Stewarts learned to do without. Most importantly, however, is the curtains. Both Anne and Nicholas are photosensitive, so they must be kept away from the sun.

Grace wakes the children while Lydia prepares breakfast. When Bertha first meets them, Anne remarks, “Are you going to leave us, too?” Bertha sets those concerns to bed, but Anne is insistent, saying “Mummy went mad.” Grace interrupts, demanding Anne sever the inquiry before it gets going. “I don’t like strange ideas. Fantasies. You know what I mean?” she asks of Bertha. When Bertha returns to the kitchen, Anne rejoins, “It did happen.” What it means, no one knows, but Anne is insistent. Mummy truly did go mad.

Nicole Kidman has reportedly said she briefly quit The Others during the pre-production phase. The role, one unlike anything she’d done before (she was 34 at the time) was reportedly too heavy, frightening enough to the point she was plagued by nightmares. It’s understandable. Amenabar continues the tradition of gothic gutting, old houses, and older secrets stripping a person’s soul raw. Its PG-13 rating might be a fluke. The Others goes where few other ghost stories, past or present, dare travel.

The first hint of what The Others is really about occurs early on while Grace leads lessons for Anne and Nicholas. They read stories of young persons dying for their faith, sending both children into a fit of laughter. Pressed on what’s so funny, Anne takes the bait. If her life were on the line, she’d simply deny Christ while believing in him on the inside. Nicholas agrees. The fog creeps in, shrouding the house, and Grace asks, “You both would have lied to the point of denying Christ?” They nod in agreement. Rather than let it go, Grace leads them down a theoretical rabbit hole. “The next life. The one that’s waiting for us. Where would you two have gone?”

Neither can answer, though Nicolas tries. There’s Hell where the damned go, and purgatory. Then, of course, there’s Limbo. In denying Christ, however, he can’t quite reason where he and his sister would have gone. “The center of the earth,” Grace interjects, “where the damned children go. Try to imagine the end of eternity. Close your eyes and try to imagine it. Forever. Pain. Forever.” Neither is liable to deny Christ after that. Ceaseless, unending pain. A fate worse than death.

Grace then splits them up, the first suggestion that there might be something awry in their home. Nicholas is afraid of seeing a ghost, though Grace is incredulous. After all, she doesn’t tolerate the fantastic. If he sees a ghost, Grace suggests he say hello and continue on studying. Moments later, someone is crying, though Grace cannot figure out who it might be. “It’s Victor,” Anne remarks, a young boy she’s seen several times before.

Spooky goings-on continue, with Amenábar adroitly masking his true intention. In The Others, it’s not a matter of whether the house is haunted; it’s about how it’s haunted, who the ghosts are, and what their intent is. It’s a clever reversal, and Amenábar wisely folds Grace into the fray as early as possible. Rather than letting incredulity guide her, Grace quickly believes that something isn’t quite right. While it might not be ghosts, a piano playing by itself is enough to convince her. As she sifts through memento-mori photographs and phantom footsteps, Grace solidifies her fear. And trust me, that fear has rarely been as palpable and visceral as it has been with Kidman’s Grace. Her fear becomes our fear. It’s a touchstone horror performance, one of the most equalized and inward the genre has ever seen. “There is something in this house,” Grace says, “something diabolic.”

The ghosts, as Anne posits, don’t float around in white sheets, dragging chains behind them. They’re more than that. Ghosts of war. Ghosts of grief. And, for good measure, a frightening old woman Anne remarks having seen the most of any, a solid 14 times, scribbled with ferocious childhood intensity for maximum scare factor. Bertha, in conversation with Grace, remarks, “Sometimes when you leave a place, it’s like it’s there with you all the time.” And these ghosts are. The priest isn’t coming ‘round. The seagulls have gone quiet. The fog has all but encroached upon their domicile. As Grace flees into the woods toward town, she’s turned around several times, always ending up back at the house, solidifying Bertha’s chilling words from earlier: “I think sometimes the world of the dead gets mixed up with the world of the living.”

Grace can’t quite believe that. “God would never allow such an aberration. The world of the dead and the living will only meet at the end of eternity.” Only, they have met, and with the reappearance and later disappearance of Grace’s husband, Charles (a chilling Christopher Eccleston), Grace grows more and more convinced. Amenábar wisely circumvents the dead giveaways of The Sixth Sense. Charles is practically catatonic, but he is tactile. He is physically and proximally present in the house, seen and heard by all. “Why did you go to war?” Grace asks him. “Your place was here with us.” He can’t bring himself to answer, and soon, like the servants, Charles is simply gone. While the war is long over, he still insists he belongs on the front line.

Bertha and the servants continue along the periphery, adding to the uncertainty. Edmund suggests Bertha “bring all this out in the open,” to which she replies, “all in good time.” It’s clear their intentions are sinister (or perhaps not), but there’s no indication of what they’re planning. Certainly, they want Grace to fully accept “the others,” with Bertha remarking, “Don’t worry. Sooner or later, she’ll see them. And then everything will be different.”

Famous scenes intersperse the transition to the third act. “I am your daughter” is one of the century’s preeminent scares, aped to death, perfectly parodied in Scary Movie 3 (or not, on account of Charlie Sheen). Anne’s mother has gone mad. She wants to kill her. Attitudes shift among the cast to a Taco Bell Gaslight Supreme. Everyone other than Grace, of course. She’s simply trying to navigate unfamiliar terrain. “You want to frighten us,” she screams. “You want to get us out of this house!”

Someone, or something, does, and Kidman’s spiral is a behemoth of a performance. In an interview with Spliced Wire, Amenábar said of Kidman:

“She added things to the character and made her more complex. To have an impact on the audience, to get connected to the audience, this shouldn’t be through a special effect. It should be through the faces of the actors.”

If The Others was nothing but Kidman, it would work just as well.

It’s about time to arrive at the twist. Unless audiences have been living in the British tarn, they know Grace, Anne, and Nicholas are the ghosts. The phenomenon they’re experiencing aren’t ghosts, but rather the new, living owners, their worlds at times colliding. Grace, in the throes of grief, smothered both of her children with a pillow before turning a rifle on herself. “At first, I didn’t understand what the pillow was doing in my hands,” she said, before mournfully and resigned, she concedes, “I killed my children.” Rather than inconsolable, Grace is weightless, freeing herself from a burden she didn’t even know she carried. “I got the rifle. I put it to my forehead, and I pulled the trigger.”