Netflix Shocker ‘Incantation’ is the Future of Streaming Horror 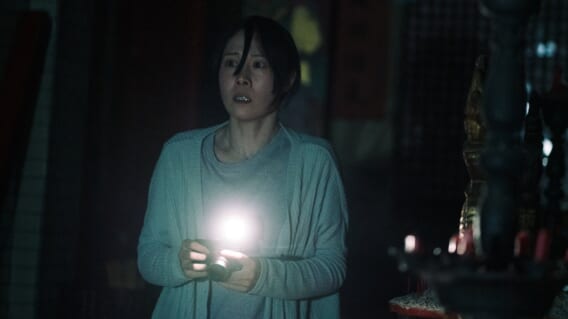 Kevin Ko’s Taiwanese found-footage shocker Incantation just might be Netflix’s best horror distribution to date. A non-linear tale of possession and curses, Incantation starts with an accursed dirge. A woman named Ronan (Tsai Hsuan-yen) commands viewers to remember both a cryptic insignia and incantation: Hou-ho-xiu-yi, si-sei-wu-ma. The ostensible purpose is protection. They are means of remotely contending with a curse inflicted on Ronan’s young daughter, Dodo (Huang Sin-ting). Almost a game, Ronan teases the audience with matters of suggestion. Visuals of trains and rotating circles appear on-screen accompanied by Ronan’s urging. Via the power of suggestion, one can shift perspectives and see things differently. The mind, it appears, is a dangerous, maddeningly powerful thing.

Incantation unspools non-linearly. Effective punctuations of emotion intersperse distinct narrative timelines. It tracks the moments before Ronan encountered the curse and her efforts to reingratiate herself into Dodo’s life after an institutional stint. While the limits of the found-footage conceit stretch thin, running the gambit from filmic incredulity to post-production flourishes, it’s perversely effective. All the more so because Incantation attempts a horrifying, successful effort at indoctrinating the audience into its cursed narrative.

A fever dream of flashing frights and more chanting than I’m comfortable with, Incantation is easily one of my favorite horror offerings of the year. It is arguably one of Netflix’s most successful “Originals” ever, too. Netflix disseminated it to international audiences on July 8 after a successful run in Taiwanese theaters. A case study for Netflix’s distribution strategy, Incantation represents both the best and worst of what the platform has to offer

Most concerning is how innately ephemeral Incantation feels, a de facto consequence of its distribution. Had it not been for a tweet or two I saw this past weekend, I never would have known it was even available. Though my Netflix account skews toward horror, my home page is expectedly filled with big banners for Stranger Things and early aughts temptations in the form of Freddy vs. Jason. In the week since, it has all but disappeared, buried beneath a sea of haphazardly designed cover images. It’s worth noting that last week, Netflix tweeted about Miley Cyrus’ 2012 LOL. They said nothing of Incantation. Last year, I reviewed Red Dot. Does anyone who didn’t catch it that first week even know the movie exists. Though I wish otherwise, Incantation is liable to suffer the same fate.

While it would be nice to see more mid-budget offerings available, especially in the horror space (perhaps the last vestige of theatrical mid-budget experience there even is), there needs to be recognition that in some capacity, moviegoing has been rendered digital. It’s on phones, computers, and even televisions, almost every current model of which comes equipped with smart software to easily load Netflix, Hulu, Amazon Prime, and more (looking at you, Arrow fans).  Incantation, whether it dissipates from history or not, stands out not just for being exceptionally scary, but also for being the kind of movie that perfectly fits the streaming model. Spoilers follow.

As Incantation comes to a close, Ronan subverts audience expectations. The incantation from the beginning, one referenced several times through the movie, isn’t actually a blessing, but a curse. In reciting it or even thinking it, one submits to carrying part of the curse. Ronan’s goal remains the same– she is desperate to save her daughter– in like Sadako’s cursed videotape, Ronan hopes to dilute the curse by passing it on to others. The more people who shoulder Buddha-Mother’s curse, the weaker it becomes, and hopefully, it might become so weak, Dodo can be spared. The final step is to reveal Buddha-Mother’s face, and Ronan does so on camera. A hollow cave that appears to stretch into infinity, it’s the kind of Blair Witch, standing in a corner still image that haunts long after the credits roll.

The social nature of the curse, the desperation to disseminate it as wide as possible, is uniquely suited to streaming. The impact of the twist would have been dulled in theaters. It doesn’t quite hit the same in a dark auditorium with maybe one or two other people. At home in the dark, though, with the gnawing recognition that several thousand other people are likely watching it at the same time, is chilling.

Incantation adroitly taps into its cursed elements. Netflix hasn’t quite achieved that same haunting endurance with any of its other original offerings. The likes of The Babysitter or Gerald’s Game, while excellent, never felt distinctly like streaming movies. They were movies offered on streaming, yes, but not ones that needed to be streamed. Conversely, it’s hard to imagine Incantation working in any other form. While that doesn’t retroactively render Netflix’s distribution strategy a success– and to be very clear, it isn’t– but it does yield promise for the future of the genre. In a landscape defined by digital convergence, more and more media will find release that way, and if they can be cleverly modeled to fit their channel of release, well, that’s an exciting prospect.

Incantation’s thematic and narrative push are innately bent toward streaming. It’s fiction, sure, but it’s haunting all the same. An American remake will be announced in time. While that might come to fruition or linger in Train to Busan development hell, it almost certainly won’t be as perversely effective as Kevin Ko’s original. Incantation is a hellish blast from start to finish. If you know what’s good for you, you’ll shoulder the curse this weekend, too.