Heat Freak: These 5 Films Will Make You Melt

It's too hot. Don't melt out there like these poor people! 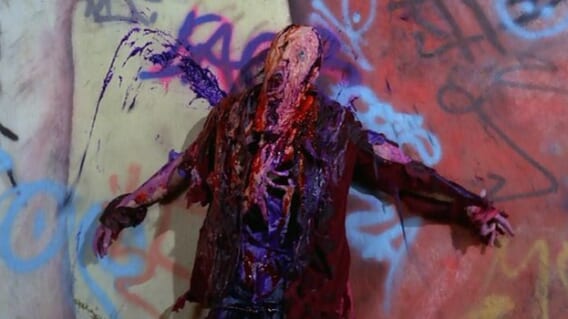 A brutal summer heatwave is sweeping the nation right now. Instead of keeling over from heat stroke (I’m guessing you’re just as pale as I am), stay inside with the AC pumping and watch horror movies! There’s no reason to feel like you’re melting when you have the luxury of witnessing a few outrageous kills where the victims melt into their own puddle of slime. At the very least, it should help cool you off.

Sadly, there are really only a handful of death-by-melting horror films out there. When you do come across them, there’s usually an underlying social commentary about nuclear waste and class warfare. Or, they’re dripping with anti-corporate sentiment. All of which, I’m fine with. To help us all beat the heat, I’ve culled a list of the top contenders together so we can watch others suffer together.

The slime punk subgenre is a small, intimate club of films featuring some of the most memorable melting deaths ever committed to celluloid. They were mostly shot during sweltering summers in New York City in the eighties, where guerrilla filmmaking was a contact sport. Films like Basket Case, The Toxic Avenger and Slime City traded in the tie-dye of the late sixties for hot rays of neon.

The unrivaled champ of this subgenre is Jim Muro’s Street Trash. Filmed in Greenpoint, Brooklyn in 1987, the ragtag story follows a group of bums looking for their next score. The guy at the liquor store can’t stand them, so when he finds a dusty crate full of questionable booze called Tenafly Viper, he sells it to the homeless for a buck. Turns out, it’s highly poisonous and melts you from the inside. Actor Bruce Torbet plays Paulie, the first and most memorable victim of the tainted sauce. His gloriously disgusting death is so colorful it borders on the psychedelic.

Writer Roy Frumkes also directed the legendary Document of the Dead documentary about the making of Dawn of the Dead. There’s also a great making-of doc of Street Trash called The Meltdown Memoirs on the blu-ray. Director Jim Muro revolutionized the steadicam with Street Trash and went on to work with James Cameron on The Abyss and Titanic. Remember that classic chase scene in Point Break? That’s him. Muro, now a legend in the industry, had a great indie horror run with this film, Brain Damage and Maniac Cop.

New Zealand and Australia have such a richly bizarre and wondrous horror history. The New Zealand Film Commission embraced Peter Jackson’s suburban shocker Brain Dead in the late eighties. That support carried over into the nineties with Dead-Alive. Australia took notice and Body Melt was born. Written and directed by Phillip Brophy, Body Melt centers around a cookie cutter neighborhood called Pebbles Court. Unbeknownst to the residents, a company is using them as human guinea pigs to test out a new body drug.

Similar to Street Trash, you can feel the sweat dripping off the characters as they slowly transform. The sequences in this will make you question whether or not you ever want to take supplements again. Fortunately, Body Melt is starting to find a larger international audience. Every kid in Australia seems to know about it already. It’s a new dark comedy biopunk classic.

I had never seen The Incredible Melting Man until lockdown during the pandemic. Spectacle Theatre showed it on Twitch during their Blood Brunch series. From 1977, William Sachs directed this lumbering horror about an astronaut (Alex Rebar) who is tragically transformed into a psychotic goopy, jelly-like creature after returning from a doomed space mission.

An All-American boy, Steve West isn’t exactly happy about going from working at NASA to wandering the countryside as a slimy flesh monster. Steve Kostanski’s mock trailer “Bio-Cop” taps into the same existential angst that The Incredible Melting Man exudes. Although it’s a little slow at times, it’s required viewing for the melting enthusiast. The title alone is cause for a summertime viewing.

Just think, someone could’ve gone to see Star Wars that year and decided to see this instead.

Another New York City slime punk classic, Slime City makes you feel the heat. Greg Lamberson is the unsung hero of this era in the city that never sleeps. Contemporaries like Frank Henenlotter and Bill Lustig tend to garner a greater level of appreciation. That should change when you watch his contribution to such an important time in east coast horror history.

Lamberson has an ooze oeuvre all to himself, actually. 22 years after making Slime City, he shot the truly independent sequel, Slime City Massacre up in Buffalo, New York. Starring Debbie Rochon and horror author Kealan Patrick Burke, it features plenty of melting terror as well. One scene featuring Rochon dissolving into a bathtub is probably the gross highlight. Still, it can’t quite compete with the final scene of Slime City starring a decapitated head and a crawling brain wiggling on a kitchen floor.

The oldest and, hence, O.G. of the melting movie world has to be the 1968 space saga The Green Slime. MGM put out this gloriously gooey interstellar romp right smack in the middle of one of the most violent years in history. 1968 was full of riots, wars and assassinations. People needed to escape to the far reaches of space and see a group of astronauts get manhandled by disgusting, tentacled monsters. The Green Slime is pure, unadulterated cheesy sci-fi escapism. It also boasts one of that decade’s most ridiculous trailers.