Courteney Cox's Gale Weathers stands alongside Sidney Prescott as the face of the 'Scream' franchise. 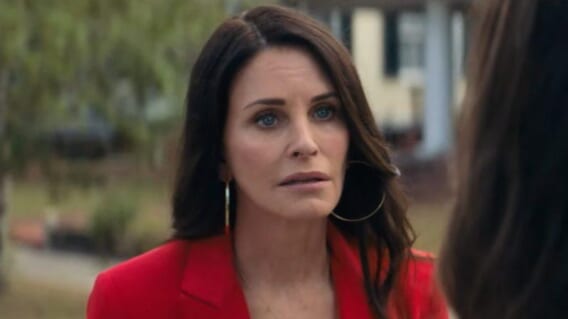 Courteney Cox as Gale Weathers is one of the most seminal character arcs in horror movie history. Conceptually a foil to series protagonist and final girl Sidney Prescott (Neve Campbell), especially in the first entry, Scream, Gale has grown into her own. She now all but matching Prescott as the face of the franchise. Troubling news has circulated that Campbell won’t be returning to the sixth entry in the series (and to be clear, it’s an entirely fair refusal). Resultantly, it’s all but confirmed that Scream 6 will follow the Scream 3—damn Party of Five—template with Gale Weathers at its center. It’s long overdue.

At the series’ inception, Weathers is perhaps more a metatextual mouthpiece than even horror buff Randy Meeks (Jamie Kennedy). She is a non-genre native enmeshed in a horror movie all her own. She’s proactive, curious, and just a tad bit exploitative, especially as it relates to the murder of Maureen Prescott, Sidney’s mother. Framed as the weaponization of Sidney’s grief, it’s worth noting Gale was right all along. Sure, her righteous crusade in support of alleged murderer Cotton Weary (Liev Schreiber) helped sell a ton of books. But Gale genuinely believed he was innocent. And, well, he was. Rather than let sloppy police work and community paranoia run rampant, Weathers assessed the evidence objectively. She correctly posited not only that Cotton wasn’t the killer, but that the new string of Drew Barrymore killings were the result of Maureen’s real murderer.

Also Read: Gale Weathers and the Vilification of Female Ambition

Sure, it’s difficult to see beyond her gilded jackets and blood-soaked heels, and her unequivocal disregard for other peoples’ feelings. But it’s there, a surging desire for primetime justice. Gale herself, after escaping in (and later crashing) the news van, opts not to save only herself, but return to the scene to deliver the ostensible final blow to killer Billy Loomis (Skeet Ulrich). It’s a gangbusters moment, cementing Gale’s legacy as a force to be reckoned with. As she fires off the gun, she blithely quips, “Guess I remembered the safety that time, you bastard.”

By the time Scream 2 rolled around less than a year later on account of a truncated and rushed production, Gale has ostensibly regressed. She’s back with highlights and calf implants, ready to ingratiate herself into the middle of another series of slayings. She and Sidney spar, sure. But by the time Scream 2 ends, she’s back to saving the day (and figuring into the series’ best chase scene to date). A bonafide fan favorite, two movies in, Courtney Cox all but made Gale her own. A comic force to be reckoned with, Cox’s most famous role in Friends squandered the manic energy that made Gale such an inimitable, enduring tempest of rocky ethics and fierce outfits.

With Neve Campbell sidelined for the first half of Scream 3 on account of other commitments, the mantle fell to Cox. While contemporaneous reception was mixed, Craven’s third entry in the series has since been recontextualized. In other words, Scream 3 is no less worthy of the Scream moniker than the first two entries. Sure, it’s funnier, a bit goofier, and the meta commentary veers dangerously close to parody, a line the first two entries toed remarkably well, but it’s more Scream. Most importantly, it’s more Gale.

Set principally within the eye of the Stab 3 production, it’s telling that the movie-within-a-movie screen counterparts are all eclipsed by Parker Posey’s Jennifer Jolie, the actress playing Gale Weathers. It’s two Gale Weathers for the price of one. The antagonistic banter between Cox and Posey is the kind of comic juxtaposition that other filmmakers envy. It’s so organic and so consistently compelling, it almost leaves fans desiring an outing that’s exclusively Gale Weathers. Scream, but make it Cox’s movie through and through, even with those bangs.

Scream 4 has similarly been reassessed—it’s not only very good, but eerily prescient. While Gale’s role was reduced some, given little to do until the end, she’s still a keystone feature of the series’ meta-horror. Gale intercepts Woodsboro High’s cinema club and is the first to discover the new killers are filming their murders. She even gets the applause-worthy “Clear” as she delivers what should have been the killing blow to Jill Roberts (Emma Roberts) courtesy of a defibrillator. Plus, she looks great the entire time she’s doing it, dripping in a modernized pantomime of her earlier, distinctly-nineties look.

Then, of course, there’s Scream (otherwise known as Scream 5). It’s a bonafide return to form that proved just how much life remained in the series Craven and company started. Curiously, it’s the first film in the franchise to truly make the killings personal to Gale, the only member of the original trio without a distinct personal tie to the killers. Dewey (David Arquette) lost his sister. Sidney might as well change her last name to Ghostface. But until the fifth entry, Gale was there peripherally, a part of things without really being involved. The death of ex-husband (a poignant meta thread within the movie) Dewey Riley was aggressively personal. Gale, and Cox, gamely channel that rage in the finale, taking down one of the two killers alongside Prescott.

While the plot for the forthcoming entry is kept tightly under wraps, Cox was among the first to announce her return. This renders it likely the sixth entry, at least in part, will track the aftermath of Dewey’s death, resulting in an entirely new (and pissed off) Gale Weathers. Whatever fans want to make of Campbell bowing out, the conclusion of Scream did at least give Prescott a proper send-off. Prescott is right. She had no reason to be involved there. With her metaphorical passing of the torch to Sam Carpenter (Melissa Barrera), she can gracefully take her leave and live the life she deserves.

Gale on the other hand has an entire arc left explored. A life post-Dewey is ripe with dramatic potential. Cox ably demonstrated that a decade away from the franchise hasn’t neutered Gale’s acerbic edge in the slightest. The Scream franchise means a lot of things to different people. But few would disagree that Gale is arguably just as important as Sidney. Funny, fierce, and ruthlessly intelligent, Gale Weathers doesn’t just deserve a Pulitzer. She deserves a spot among the best final girls the genre has ever seen.