Every Final Girl needs to be a little bad! 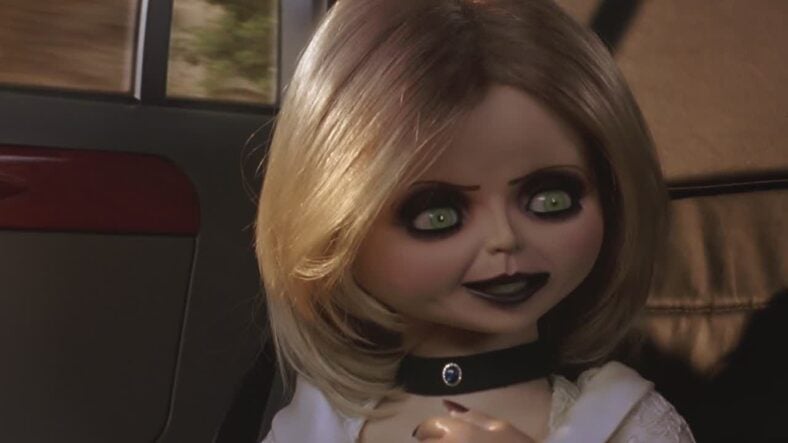 Final girls have always been about the side of good prevailing. But what about a final girl who doesn’t have a lot of good in her? What if she has a little bit of bad? Okay, what if she’s actually the villain of a film, but there’s a bit of sympathy within her character? Enough with the questions. Let’s just get straight into the fourth Fifth Final girl, Tiffany Valentine (Jennifer Tilly), of Seed of Chucky (2004).

Tiffany returns after Bride of Chucky (1998) in which she was supposedly put to rest after being burned and killed alongside Chucky (Brad Dourif). Their child, Glen (Billy Boyd), makes their way to the set of the “based on true events” film based on Chucky and Tiffany. They then resurrect them using the Heart of Damballa. This takes the family on a journey through Hollywood in which Tiffany’s obsession with Jennifer Tilly (Jennifer Tilly) leads her to want to possess Tilly’s body. Tiffany and Chucky are also coming to terms with their surprise child who is on their own journey of discovering their gender identity.

If they aren’t retreading familiar ground, fifth entries in a horror franchise tend to go a little overboard with their stories. Don Mancini’s Chucky franchise may appear to do that with this meta, Tilly playing herself, comedic turn. But everything just falls into a place of perfect camp. Tiffany’s role is the penultimate ingredient for this camp. There’s just a little bit more to her than that, though.

What makes the femme fatale killer doll a final girl in my eyes? There are a few reasons. In both this film and the previous one, Tiffany’s problem with killing stems from her toxic relationship with Chucky. He’s the catalyst for her blood lust. True, on her own, her lust for bloodshed is evident. But in Seed of Chucky, she wants to stop it. Now that she’s a mother, she wants to set a good example for her child. No more killing.

What is it about fifth entries that bring in the maternal instincts? Previous Fifth Final Girls were either motherly, experiencing trauma based on their mother, or helping a mother-to-be defeat the evil. Tiffany’s revelation that she gave birth before her death in Bride, and her subsequent drive to instantly be motherly creates sympathy for her. She now has a reason to fight for life, not only her’s, but for her child’s. She even concocts a plan to impregnate Tilly with Chucky’s sperm so that Glen will have a human body to possess.

Sure, her attempts to nonconsensually possess and impregnate Tilly are diabolical. Okay, so she sheds some blood and innards in her attempts to do so. And yeah, she really doesn’t exude that much sympathy to be able to receive sympathy. There’s just a moment here and there that shows that without Chucky, she would make better decisions. Thus, this leads to me seeing her as a final girl.

The film’s plights, and by association, its multiple possible final girls, are multi-tiered. One belongs to Tilly as she attempts to survive the killer doll family’s pursuit of her. One belongs to Glen as they attempt to deal with their murderous parents and pursuit of their gender identity. The final is Tiffany’s plight to make her family a happy one. Tilly doesn’t make it to the end of the film. Glen appears to be nonbinary by the end of the film. This leaves Tiffany to be our final girl, albeit, a villainous final girl.

Really, it’s her drive to protect and provide for Glen that ultimately takes me there. Her acceptance of Glen being undecided on their gender gives Tiffany some leverage, as well. Tiffany may be pressuring Glen to be female. But it’s her acceptance that Glen could identify as female even though he presents as male adds another layer to the final girl status. An open mind is not technically an aspect of a final girl. It does, however, add to the aforementioned sympathy garnered that makes her appear to be the final girl.

Also Read: ‘Chucky’: Jennifer Tilly Is Back And She Brought A Big Scary Needle

Her love for Glen leads us to the climax of Tiffany’s final girl status. After being told by Chucky that they will not be putting their souls into human bodies because he enjoys being a supernaturally possessed doll, Tiffany announces that she’s leaving Chucky, and that she’s taking Glen with her. Chucky’s toxic masculinity surges over that announcement, and this sets him on a rampage to destroy Tiffany. “Nobody leaves me!” he exclaims as the film goes from them trying to work together to Tiffany being on the run from Chucky. This adds darkness to the predominantly campy and comedic tone of the film.

Without all of my reaches to make Tiffany the final girl, this places Tiffany right into the shoes of a final girl. I don’t want to specifically say victim, but she’s now in the pathway of the maniacal slasher who has a motive that makes him want to kill her. And she survives. Well, Chucky does get an ax in her head. But it’s amongst the switch from her doll body to Tilly’s body. Doll Tiffany suffers a final blow, but soul Tiffany goes on to live.

You know, it’s a shame that I’m not sitting here writing about how Jennifer Tilly is the final girl. Tilly as Tilly was a legitimate pleasure to watch. Now, we will forever get Tilly as Tiffany impersonating Tilly but is still Tiffany. That will never stop being a pleasure.