We chat with Fiona Dourif about filming intimate scenes with Jennifer Tilly, and why Hollywood has her categorized as 'feral'. 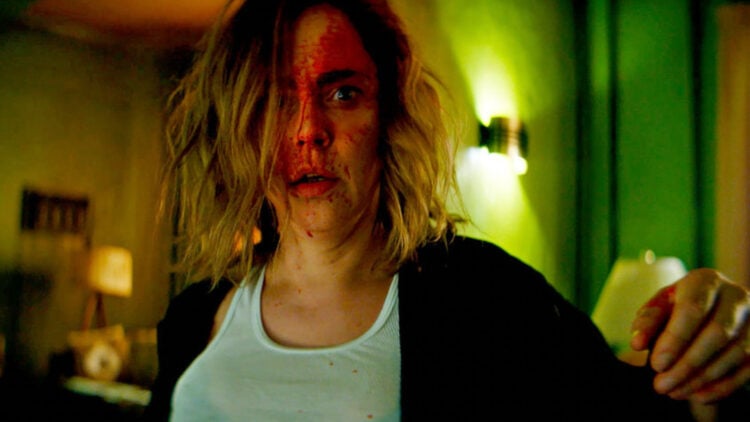 Since her initial breakout roles in the Chucky franchise, Fiona Dourif has gone on to star in some massive projects. She had scene-stealing gigs in Amazon’s television adaptation of The Purge and CBS’s reboot of Stephen King’s The Stand. She even starred in Christopher Nolan’s Tenet last year.

Now Dourif is back in Chucky, the surprise breakaway TV hit of the season from SYFY and creator Don Mancini.

We sit down with the genre superstar to hear what it’s like getting intimate with Jennifer Tilly, playing multiple roles at once and how it feels going to a bar IRL disguised as her father.

Check out our interview with Fiona Dourif now:

Dread Central: Your voice work [in Chucky] is really extraordinary. I was wondering, how did you prepare to play multiple roles?

Fiona Dourif: I knew about it for about a year beforehand. I’m close friends with Don. The moment that he would have different ideas of what was going to happen, I would sort of know. I had a lot of time. There’s actually not a lot of clips of Charles Lee Ray. My father’s face doesn’t make it in the series all that much, but I watched those many, many times. And then at some point I had to sort of make it my own. I had faith that our genetics are close enough that if I made it my own enough of him would come through, and I think that was pretty successful. And I practiced what it would feel like to sort of have your soul slip out of your body. There was a lot of practice falls in my Toronto apartment.

DC: Have you seen the internet’s response to you playing Charles Lee Ray?

Dourif: I have to give a shout-out to the prosthetics people who just nailed it. At one point I had some time off in the prosthetics. I went into a bar as a man, and people didn’t think I was in makeup. People thought I was a cis-born man. It was impressive. They did a lot of the work for me. What a cool thing to be able to experience in my life. I actually wrote a sort of essay about it that had to do with nepotism and genetics and everyone becomes their parent.

DC: The response to Chucky seems to be pretty extraordinary. What is that like from where you’re sitting, seeing everybody love it?

Dourif: I knew it was going to be good when I first read the scripts, which isn’t always the case. He had hit on something with kids, and the sweet relationship between the two leads. I mean, you think it’s bonkers now, wait until the finale! [Don Mancini] is able to do whatever he wants. So, I knew it was going to be good. I was still surprised at how many people are watching the show, and the letters and notes I’m getting. It’s just really exciting. I’m really proud of Don, who’s one of my close friends. It’s just a lot of celebration and hand slapping high fives.

DC: I have to confess, my favorite Chucky film is Curse of Chucky. Which is part of why I’ve always wondered: do you see Nica as a final girl?

Dourif: The answer’s sort of, no. Nica is a complicated, sometimes angry and distraught human as opposed to a heroine. I think came out a little bit more in Cult than it did in Curse. I think in Curse of Chucky, she was the closest I’ve ever come to playing a sort of archetypal ingenue. She becomes as flawed as anybody else in a way that I think is cool, and gets away from archetypes. She feels a little too complicated for that.

DC: Nica sort of feels queer-by-proxy in the series. Do you think that her queerness extends beyond that?

Dourif: We’re all a little queer, to be honest. I think that’s a spectrum. There’s a spot for Tiffany, I think, with Nica. So there are obviously times when Chucky has left and she’s my lover. That becomes pretty clear. That’s something we talked about. I think there’s a kind of kidnapped, arrested affection there. It’s a little more complicated. I think there’s affection.

DC: What was it like filming intimate scenes with Jennifer Tilly?

Dourif: Really fun. Jennifer is one of the freest actresses that I’ve ever worked with. You have to be ready to respond to whatever she says, which is great, because the only thing that you don’t want in performance is to get stuck in a rhythm. You’ll get something spontaneous and cool and truthful. You don’t know where she’s going to go. That was really liberating.

The first time we kissed, I was like, oh, there’s chemistry. And that doesn’t always happen. Who knows what that has to do with; if it has to do with like pheromones, or skin or what. We really became friends on this show. I really like her. I respect her. She’s smart and interesting.

And then I also liked kissing her. So it was great.

DC: You’ve become really entrenched in the horror world, not just with Chucky, but with The Purge and The Stand. What’s your relationship with horror outside of work?

Dourif: I am so scared of horror movies, but I’ll sit in the theater and then just look down. I am grateful for this genre. I couldn’t imagine a more interesting career. There’s something about how people see me in this industry that gets me playing characters that are so much more complicated than the wife or the girlfriend or whatever. The offers that I get are human beings who have suffered and made a decision that will free them to do whatever they want. And if that’s destruction, that’s part of it. It’s just a more fun outlook and role to explore. I’m deeply grateful for it.

DC: Why do you think you landed that privilege as an actor?

Dourif: Do you want to know the real answer?

Dourif: Everybody’s got their story, and I think there were a few things that happened in my childhood that were just really strange. I can imagine it’s because I’ve just suffered. I’ve suffered in a way that I’m grateful for, and has allowed me to sort of understand it. There’s a glint in my eye where people can tell. That’s really what I think. Or my face just looks evil. I kind of look like a witch. I don’t know. One of the two of those.

The word that seems to follow me in all of the straight offers that I get, besides the project I’m doing now actually, is feral. I have the ability to play feral, and I love doing it.

DC: Last question. If you had the ability to reboot any film from history, have you ever thought about what you’d want to take on?

Dourif: One of the most impressive movies for me was Mike Leigh’s Naked. Do you know it?

Dourif: It’s Mike Leigh doing a horror movie. It’s starring David Thewlis, and it’s about a man’s exploration through hell. I think that movie was a masterpiece and is incredibly layered. For me, it was the most interesting exploration of man’s creation of hell in his own mind.I would be interested in that story again and again.

DC: I’m spooked already. I hope that you get those rights.

Lastly, how do you feel about the Chucky series? Are you as into it as I am? Let me know on Twitter via @joshkorngut. I’m always ready to chat all things Chucky.