Coping with Grief Through Self-Harm and Violence in Slapface 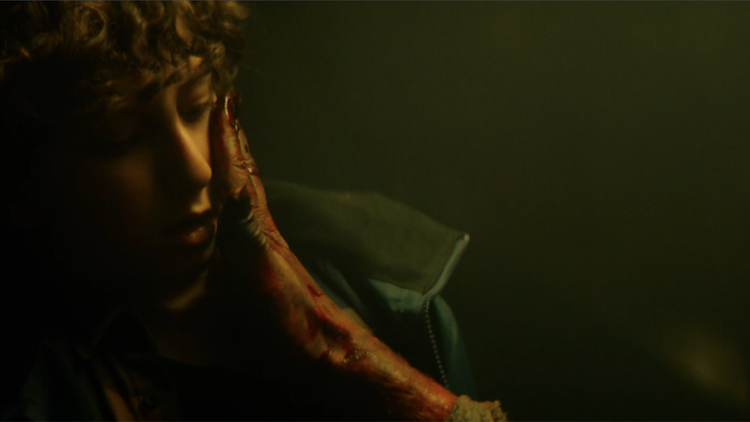 The curiously titled Slapface is a feature-length adaptation of the short film and festival darling of the same name from writer and director Jeremiah Kipp. Acquired by Dread and released on Shudder, the film has received positive reviews for its timely anti-bullying message.

Slapface follows Lucas (August Maturo), a young boy grieving the death of his mother who befriends a dangerous entity haunting the nearby woods known as the Virago Witch (Lukas Hassel). Believed to consume bad children, the Witch becomes a manifestation of Lucas’s grief and anger, threatening his relationships with friends and family. Though the depiction of bullying is powerful, Slapface is largely an exploration of self-harm and violence as coping mechanisms for emotional pain. The destruction the Virago Witch causes in Lucas’s life parallels the dangers of repressing difficult emotions. While ostensibly focused on the damaging consequences of bullying, Slapface is a demonic cautionary tale about the spiraling dangers of using violence to avoid emotional intimacy and human connection.

Slapface opens with a disturbing game. Older brother Tom (Mike Manning) asks Lucas if he understands the game’s necessity before delivering a head-rocking slap to the young boy’s face. Lucas responds in kind and the two brothers take turns slapping each other in stoic silence. They are playing Slapface, a communal method of self-harm they’ve developed to cope with the recent deaths of their parents. Though this game may be the most overt sign of dysfunction, Lucas and Tom are far from well.

Tom has become a parental figure to Lucas, hoping to keep him out of the foster care system. He works as a day laborer and Lucas spends his days getting into trouble. Though the local sheriff (Dan Hedaya) looks out for him due to lingering feelings for the boy’s mother, his patience is beginning to wear thin and he warns Tom that Lucas’ “get out of jail free” cards are running out.

But Lucas finds a new protector of sorts in the Virago Witch, a local legend said to “kill the parents of poor little boys.” Conjured by his pain, the Witch forms a jealous attachment to Lucas and punishes anyone who tries to make an emotional connection. This friendship soon spirals out of control as the Witch’s grip on Lucas begins to threaten anyone attempting to help him move on from his loss. In her sights are Tom’s new girlfriend Anna (Libe Barer) who offers emotional support. And Lucas’ girlfriend Moriah (Mirabelle Lee) who must balance getting closer to Lucas with appeasing the cruel demands of her bully friends. Though Lucas’s relationship with the Witch initially benefits him, she slowly begins to consume his life with a constant need to harm and destroy, a mirror of Lucas’s own coping mechanisms.

Also Read: ‘Slapface’ Is Here To Find Out What Scares You In This Exclusive Clip

Though the Witch is a physical presence in the film, she can be interpreted as a manifestation of Lucas’s pain and anger. Curious about the legend, he unknowingly summons her on the grounds of the abandoned Wakefield House by burning a photo of a happy moment with his mother. As part of the makeshift ritual, he cuts his hand and anoints the photo with his own blood, awakening the monster with an act of self-harm. Though it’s unclear what his intentions are, he is likely hoping to connect with the mother he sorely misses and looking for a way to find meaning in the grief he feels in the wake of her death. His friendship with the Virago Witch is born in pain and destined for destruction.

He first meets the Witch while fulfilling a dare to enter the decrepit Wakefield House and avoid torment from twin bullies Rose (Chiara D’Ambrosio) and Donna (Bianca D’Ambrosio). The girls attack him for overblown insults to their reluctant friend Moriah. More compassionate, she seems to genuinely like Lucas though she fears admitting this to the cruel twins. Hoping to scare the three girls, Lucas fakes an attack by banging on walls with a stick and yelling in melodramatic terror.

But his performance takes a terrifying turn when he sees the Witch in the mirror behind him. Lucas screams as the monstrous figure picks him up and shakes him violently against her chest, a perverted parallel of a mother rocking a baby. Though he is scared, it’s this jolt of fear that seems to literally shake Lucas out of the haze of numbness he’s been stuck in. This encounter awakens the extreme emotions he’s been unable to express but the monstrous friendship will set him on a course of destruction and disaster.

It’s no mistake that the film is titled for the painful game the brothers play. Self-harm and defensive violence pervade the film, keeping both brothers locked in a pattern of grieving that they can’t seem to break free of. Though it is consensual, Slapface is a way for the brothers to engage in self-harm while connecting with each other in the only way their grieving hearts will allow.

Though there are a variety of reasons a person would want to intentionally inflict harm on themselves or a loved one, here the practice serves as a way for the boys to channel the pain they’re afraid to express. Tom describes the game to Anna as “a way to clear away all the shit” and they use it to distract themselves from a feeling of sorrow that feels overwhelming. It’s a negative coping skill developed by two people desperately in need of an emotional support system.

Tom also uses alcohol to numb his pain. In a later scene, he drunkenly remembers the moments of his parents’ deaths and opens up about the guilt he feels for unknowingly leaving his mother behind to die. Unwilling to open up as well, Lucas reminds him that they promised never to talk about the accident and walks away leaving Tom to grieve alone. Though it is another negative coping skill, the alcohol gives Tom the courage to acknowledge the devastating guilt he carries. While sober, he pushes it deep within himself in order to get through the days, but in his altered state, he admits the need to process it.

While Lucas probably has similar feelings of guilt, he fears letting himself acknowledge them. He may be afraid that if he opens that emotional door, the feelings will come rushing in and consume him. Slapface offers the boys a way to punish themselves for what they believe is responsibility for their mother’s death as well as a way to connect with each other without the emotional intimacy they’re afraid to embrace.

Both boys also push away the girls who try to connect with them. It’s not surprising that both brothers would harbor fear of getting close to another woman having suffered the loss of the woman closest to them in the world. Though the relationship is new, Tom’s girlfriend Anna essentially moves in with the brothers, cooking and trying to provide emotional support. Tom veers wildly between enjoying this intimacy and picking petty fights. If he never lets her get too close, he never has to deal with the pain of losing her too.

Lucas enjoys spending time with Moriah, but he suggests that they play Slapface as well, an indication that he is uncomfortable interacting in a more healthy way. These interactions are probably a manifestation of the anger they have for the mother that abandoned them. Though her death was an accident, they both feel betrayed by this cruel twist of fate. Unable to argue with her, they take their anger out on any woman they see as trying to take her place.

Also Read: From Serial Killers to Time-Traveling Ghosts, ‘The Long Walk’ Is a Bone-Chilling Masterpiece [Review]

The Virago Witch’s targets offer an interesting window into Lucas’s mental state. After repeated attempts to get him to open up, the witch attacks Anna. Her death prevents Lucas from making a human connection that could lead to real healing. While being chased by the twins and a reluctant Moriah, the witch targets the kinder girl rather than the clearly more deserving bullies. Smashing Moriah with a rock, she again removes any source of support and compassion in Lucas’s life. The Witch represents the part of Lucas that fears this intimacy and will do anything to avoid being hurt again.

Though he is initially terrified, Lucas soon learns to depend on the Witch. She is a proxy for the explosive anger living within him. She encourages him to unleash his rage and the two spend an afternoon gleefully trashing his house. Though he will have to live with the consequences, the destruction feels good in the moment. He is finally purging the unprocessed pain he spends most of his time trying to repress.

Though it physically hurts, the game of Slapface momentarily feels good as well. It’s a clearing jolt and a way to punish himself for wanting to move on with his life, continuing to live while his mother cannot. But this violence soon begins to spin out of control. Lucas warns anyone who harms him about the Witch and tries to prevent the violence he knows will follow. He’s been processing his pain in a destructive way for too long and finally sees that he’s gone too far.

Also Read: Good For Her: A Timeline of Women Monsters In Film

At last seeing the Witch for the damaging force she is, Lucas asks her if she is good or evil. His assertion that he wants to believe she is good reveals a longing to make all of the pain worth it in some way, to find meaning in the random tragedy he’s suffered. The lore tells of a witch that devours the bad children. While Lucas at first disagrees, viewing the Witch as a valuable coping mechanism, he now sees the emotional walls she’s been building around him. The film’s climax shows that the legend was correct. The Witch consumes Lucas by feeding his destructive need to avoid his painful emotions.

While Lucas can hardly be blamed for his grief, a more healthy way to exorcise his demons would be through therapy or with honest and vulnerable conversations with a larger support system. The Slapface game is a momentary distraction from a problem that is not temporary. Lucas is not the bad kid the witch is rumored to target; he is a boy desperately in need of support and understanding. It’s only by processing his pain in healthy ways that he will ever break free of the monstrous grief that threatens to consume him.