‘Zombeavers’ is So Much Better Than it Sounds [The Overlook Motel] 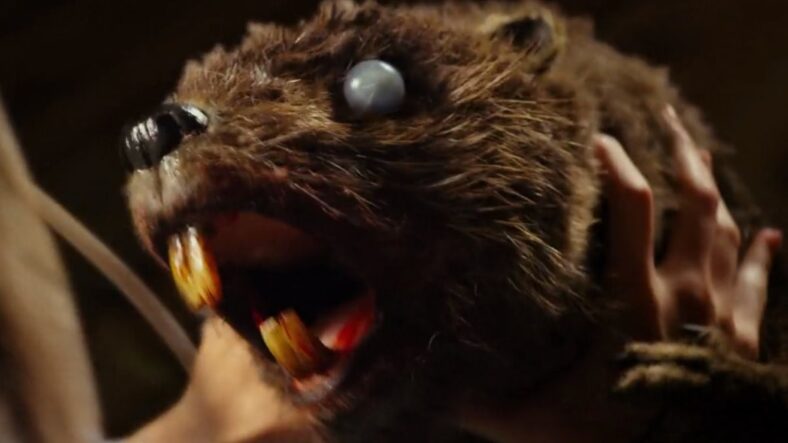 In this installment of The Overlook Motel, I’ll be looking back at Zombeavers. Everything about this film is ridiculous, starting with its outrageous moniker. But that’s the very reason Zombeavers is so effective. Co-writer and director Jordan Rubin intentionally leans into the camp inherent to the concept and that’s the very reason it works. It’s difficult to play it straight (and be palatable) with a preposterous premise. And that’s probably why Rubin didn’t even try. The laughs come early and often and the carnage is supremely goopy. If you like your arterial spray coupled with dark comedy, this film is right up your alley.

The picture follows a trio of female friends as they take to a cabin in the woods for a getaway with no cell phone service and no male companionship. Unfortunately, the ladies get more than they bargained for when a pack of mutated, blood-thirsty beavers appear on the scene to wreak havoc.

The comedy-laced gore is tonally reminiscent of Sam Raimi’s Evil Dead trilogy. In fact, Rubin appears to pay quite a bit of homage to The Evil Dead. From the cabin-in-the-woods setting to the slapstick tone to the creatures attempting to enter the cabin through the floorboards, Zombeavers is a good-natured nod to King of the Deadites.

As well as striking a great balance between comedy and horror, Zombeavers also boasts some fantastic effects work. The zombie beaver puppets are surprisingly expressive looking and manage to come across as sinister and hilarious at the same time. The carnage is also really well done. It’s brutal but in an over-the-top way that keeps it from being too much to stomach.

Some of the CGI is a little dodgy but I suspect that comes down to budgetary constraints. It looks as though the film accomplished as much as possible practically and only used digital effects for the scenes that would have been cost-prohibitive to realize any other way.

Aside from killer FX work, the film also serves up a memorable cast of characters They may not all be entirely likable. But each of them is relatable in one way or another. They feel like people you might actually meet, rather than a screenwriter’s out-of-touch idea of what people in their twenties act like.

As for why this feature hasn’t found a large audience, I suspect that has a lot to do with the fact that it’s about zombie beavers. The plot crunch makes the film sound ridiculous in all the wrong ways and it’s likely that a lot of people assumed such a film would be forgettable. But I’m pleased to say there is much more to this movie than the setup suggests.

All in, this is a really fun flick. The outtakes that play at the end leave me with the impression that the filmmakers and cast had a great time making Zombeavers. I think if you give it a chance, you’ll have a terrific time watching it! As of publication, the film is available to stream for free (with ads) on Tubi!