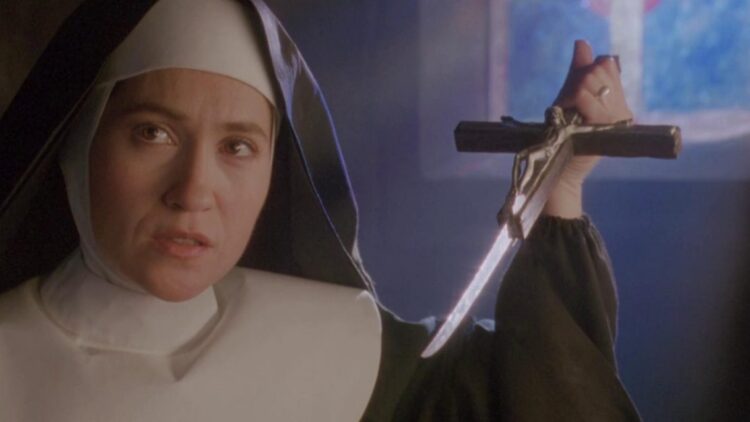 Nearly every title I’ve showcased on The Overlook Motel has been fairly well-received by critics. But that trend of respectability ends today. Today, I have a recommendation that wasn’t met with a particularly enthusiastic response from film scholars. But it is, nonetheless, a suspenseful and frightening film that is deserving of your attention. Today, we will be looking back on the criminally underrated supernatural horror thriller, The First Power.

The First Power sees Detective Logan (Lou Diamond Phillips) capturing The Pentagram Killer (Jeff Kober) who is put to death shortly after apprehension. However, Logan quickly discovers the murderous madman has developed the ability to pass from host to host, possessing the bodies of innocent victims to continue his reign of terror, even in death. To catch the killer, Logan teams up with a savvy psychic called Tess. Together, the pair must work to outsmart a coldblooded killer with supernatural abilities.

Writer/director Robert Resnikoff taps into something really scary here: The notion that even death can’t stop the truly evil and deranged from doing their bidding. The flick’s antagonist is dispatched very early on. But even that fate cannot contain his particular brand of evil. And that’s more than a little unsettling.

Jeff Kober is sufficiently menacing in his portrayal of Patrick Channing. He is maniacal, unhinged, and seemingly fears nothing. Especially not death. He is remorseless and singularly focused on causing chaos and destruction. The character is essentially evil personified and Kober really leans into that sinister nature when brining Channing to life.

In death, Channing only becomes more powerful. He assumes the ability to alter the perceptions of those around him and to jump from host body to host body. He possesses the weak and marginalized and uses their vessels to do his sinister bidding. Making things even more sinister, his power comes directly from The Dark Lord, to whom Channing has pledged his allegiance.

The way Channing can pop up at any time in nearly any host body is quite unnerving. He frequently assumes a new form and initially presents as if he is the person he is impersonating, waiting until the viewer least expects it to reveal his true self. This creates a world where no one can be trusted and everyone is a potential suspect. This has the potential to create a heightened sense of paranoia where the viewer can never quite trust what they see. For me, this ratchets up the tension and makes The First Power a nerve-shredding experience.

Lou Diamond Phillips is great as Russell Logan and he does a fine job in the lead role. But the real standout, for me, is Tracy Griffith as psychic Tess Seaton. Tess is smart, determined, and willing (as a civilian) to put her life on the line to keep a dangerous psychopath from terrorizing Los Angeles. That kind of selfless dedication makes her an engaging character that is easy to invest in.

In addition to great characters and the tendency to invoke a heightened sense of paranoia, I was also quite taken with the film’s set design. The subterranean sequences that transpire in the water tunnels under the city of Los Angeles are eerie and claustrophobic. They seemingly suggest that evil lurks around every corner and is waiting for the right moment to appear and wreak havoc. And considering how closely that parallels the MO of The Pentagram Killer, the setting is quite fitting.

As for why this film seems to remain under-seen more than thirty-years after its release, I suspect that has to do with the tepid critical response at the time of the film’s release. But please don’t let that deter you from checking out this supernatural chiller. I would encourage you to have a look for yourself and form your own opinion from there. If you opt to check out The First Power, please let us know your thoughts on Facebook, Twitter, or Instagram.