DREAD: The Unsolved Goes Searching For the History of Bigfoot

This week, we dive into the unexplored backwoods of America to search for the origins of Bigfoot. 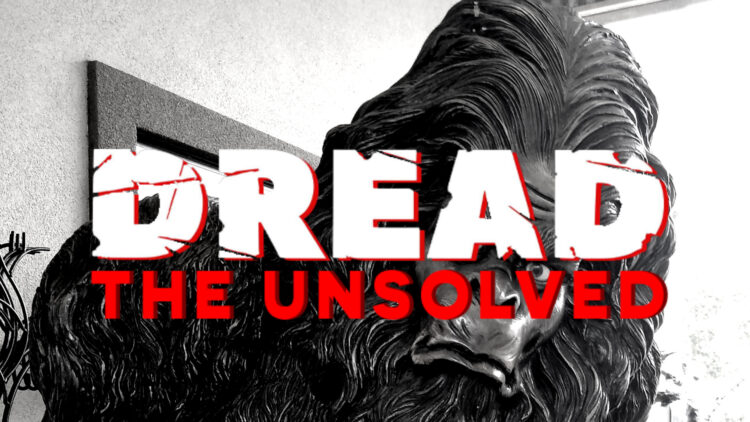 In a survey conducted in 2005, it was found that roughly 5% of the forests in the United States remain under or un-explored. It’s surprising that some places in nature remain untouched by humanity. To think that there are still areas where mankind is a visitor is humbling. What could be hiding in these vast stretches of forest? Some believe there is something out there. Something large, hairy, and strangely…human.

Sasquatch, also known as Bigfoot and a hundred other names, is allegedly a massive, bipedal creature. Often described as being well over seven feet tall, with thick fur covering its body. It has been described as benevolent by some, malevolent by others. Its stomping grounds cover essentially the entire country, with reports coming in from Oregon, all the way to Maine.

These days, we just assume Bigfoot has been around forever. We never stop to wonder where the mythos began, and why people are so convinced that it’s out there. To understand our modern version of sasquatch, we have to go back just a bit, to 1958. A small paper called The Humbolt Times published a letter from a group of loggers who found a giant footprint at their logging site. A small, goofy bit of news on a slow day somehow captured people’s imagination.

RELATED: DREAD: The Unsolved Explores the Enigma of The Winchester House

The Humboldt Times saw the success of the story and doubled down. They followed up with the loggers, who at this time had begun calling the creature Bigfoot. This of course was not the first report of a mysterious wild man in the U.S., but as author Joshua Blu Buhs explains:

“There are various wild man myths from all over the world. People later go back and dig through old newspapers and stuff and find scattered reports of a wild man here, a wild man there. But it doesn’t coalesce into a general discussion until the ‘50s.”

From there, Bigfoot had captured the cultural zeitgeist. Popular men’s magazines of the time were publishing Bigfoot stories weekly. It allowed the average person to imagine taming a great wilderness and bringing down whatever 10-foot tall guardian those spaces may have had.

Eventually, idle fantasy became a flirtation with investigation. The men’s magazines of the ’50s and ’60s turned into the less-than-scientifically-rigorous documentaries of the ’70s. In 1972, The Legend of Boggy Creek would present itself as a true story of The Fouke Monster: a Bigfoot analog wandering the forests of rural Arkansas. In the ’80s, Bigfoot would become a kind of eco-warrior, a representation of the fragility and majesty of nature. As time has passed, Bigfoot has firmly entered pop culture and is here to stay.

Related: Everything You Know About Bigfoot Has Been SQUATCH’D

So what evidence do we actually have that Bigfoot exists? The most convincing that I’ve personally seen hails from California in 1967. Robert Patterson and Robert Gimlin were standing on a sand bar when they witnessed a large, bipedal, ape-like creature passing through a dried creek bed. The 59 seconds of footage they recorded, now referred to as The Patterson Gimlin footage, is one of the most compelling pieces of evidence pointing towards the existence of Bigfoot.

No one has been able to definitively prove it as authentic, even after 50 years. Notable attempts have been made, and whether they were successfully convincing or not is entirely up to you. On and episode of The History Channel series Monsterquest, scientists Jurgen Konczak and Esteban Sarmiento attempted to recreate the movements shown in the Patterson-Gimlin footage by hiring a professional mime to mimic the video. They were unable to replicate the motions in the footage.

Rick Baker, special effects artist who created the loveable Bigfoot Harry in Harry and the Hendersons went on record in 1992 that he believed the footage was fake, due to it looking like “cheap, fake fur”. In recent years, he has retracted his statement.

Related: Dread: The Unsolved Studies the Perplexing Mutilation of The Black Dahlia

Stan Winston, the visual effects juggernaut behind Terminator and three Jurassic Park said, “it’s a guy in a bad hair suit, sorry! If one of my colleagues created this for a movie, he would be out of business.”

As it stands, the Patterson-Gimlin films will remain a tantalizing bit of footage.

To scientists, the Patterson-Gimlin film is not worth the effort to properly debunk or prove. Experts studying Bigfoot are more apt to look for tangible physical evidence.

In a 2014 report from the Proceedings of the Royal Society, a group of scientists led by Oxford geneticist Bryan Sykes, sought to analyze a large group of hairs collected over time that people believe came from a Bigfoot. The testing reveals something…unsurprising. The hairs belong chiefly to everything except a sasquatch: cows, raccoons, dogs, cats. You would think this landmark testing would be the death knell of Bigfoot research, but it’s actually quite the opposite.

People are hunting Bigfoot now more than ever, and that can, at points, be potentially dangerous. As recently as 2017, a self-reported Bigfoot shaman in North Carolina riled up a 5,700 person Facebook group by walking through the forest at night in his shaman attire. After reports and photos started pouring in, he came forward to admit that he was conducting a “sasquatch prayer”.

“After watching this video from nearby Boone, North Carolina, Facebook followers, and friends, I think we can say with confidence that proof of Bigfoot still eludes us. If you see Bigfoot, please do not shoot at him/her, as you’ll most likely be wounding a fun-loving and well-intentioned person, sweating in a gorilla costume”.

The people who reported sightings deny that it was a shaman they saw. Saying that the creature that they saw was faster than a human, and covered in a long, shaggy fur that the shaman outfit didn’t have. As it stands, no one is quite sure if something other than a shaman was wandering the woods of North Carolina. The Greenville Police Department, near the sighting, had a slightly more comedic take on the situation.

More and more people are taking up their cameras and hunting for Bigfoot. Entire industries have been built around the hunt for the elusive beast. I could not begin to list off all of the towns in America that built their success off of the Bigfoot tourist trade. It’s a mystery, but it’s our mystery. We want to believe that there is still something left to find out there in the world. Something undiscovered, maybe dangerous.

I personally, dear viewer, believe that Bigfoot is real, but…What do you think? Is there a massive undiscovered creature roaming the primordial forests of America? Or is it just a man in a suit, trying to make a buck?

Let me know in the comments and on Twitter @DreadUnsolved or on Instagram @DreadTheUnsolved. I’m also on Facebook. You can send me your Bigfoot encounters to TheUnsolved@DreadCentral.com. You can catch a new episode of Dread: The Unsolved every Thursday on Dread Central and Youtube.