6 Horror Movies With Himbos in Their Natural Habitat 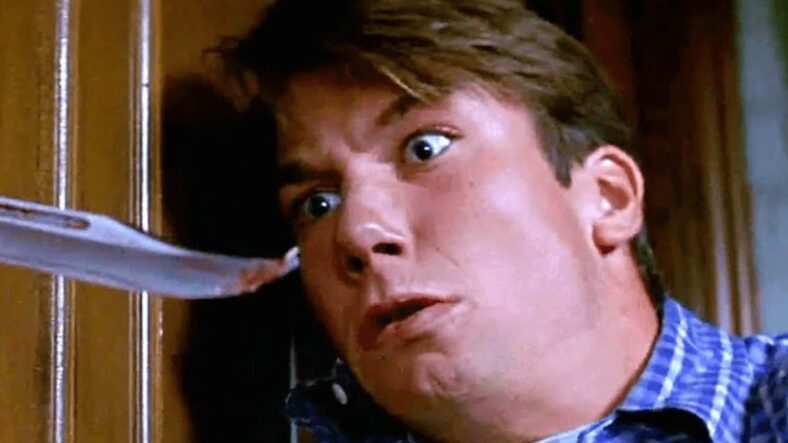 The horror genre is littered with countless women characters that seemingly serve as props. Busty women who don’t notice the giant murderer in their kitchen isn’t their husband. Topless nannies that think the children they’re in charge of are playing elaborate games inside the walls. They have no will to survive. They’ll fall out and wait calmly for their turn to be slashed. If you grew up with a television then odds are you’ve rolled your eyes at the “bimbo” trope. However, a lesser-seen trope is the “himbo,” which is one small, but entertaining, possible step towards equality. We love to see a gorgeous guy with good intentions that has an expiration date because why should women be the only ones oblivious, objectified, and “Oh, honey’d?”

I asked a few friends to help me narrow down some of our favorite himbos out in the wild. I present to you a quality list of helpless men that we can’t take our eyes off of.

From the second we see Glen get defeated by a cassette player while trying to lie to his mother, we know this baby is too precious for Freddy’s world. Our concern for this character can only be measured by the buckets of blood Freddy repainted his room in as Freddy killed him. Were any of us surprised that he couldn’t do the bare minimum for Nancy by simply staying awake? No. Did we appreciate him failing her while wearing a sweatshirt showcasing the most important midriff of the ’80s? Yes. This sweet and deliberately unhelpful character is one of the reasons most of us fell for Johnny Depp before we were old enough to know better.

Where You Can Watch: Hulu and Paramount+

Jack claims to be a camp counselor helping get the property ready for the kids but I have doubts. He seems to be at Camp Crystal Lake for a weed-fueled bone-a-thon because he knows what he’s about. Jack is here for a good time, not a long time. This becomes evident as he has sex in bunk beds underneath his dead friend and above Mrs. Voorhees. Leave it to Kevin Bacon’s debut role to see him breathe life into one of our first himbos murdered in bed. We can’t help but think fondly of this character whether we remember him for his tank top he died in, or the revealing swimsuit trunks that made us Google the costume designer.

Ray is another precious ragamuffin that makes no sense. He kinda mansplains urban legends to Julie and then sincerely tries to convince the group he ran a dog over. He then begins working at the docks as the group seemingly leaves him out of the shenanigans for his own safety. Ray contributes so little to the group that Julie suspects he might be the killer towards the end of the movie. He does take quite a few ass-kickings, which buys her some time once they meet the deadly fisherman who cut their friends into fish sticks. He also comes through with the assist at the last possible second so he can earn his place in the sequel. A historic moment that himbos everywhere should be proud of.

Where You Can Watch: Peacock

Derek’s himbo star shined so brightly that Dewey had to wear shades in this sequel. Initially, we’re tempted to give him a pass for not understanding that Sidney’s death radius doesn’t care about frat parties. However, after he’s stabbed in the arm he still seems to think he can stop Ghostface with love. He even makes a big show of giving her his frat letters because he wants Ghostface to know they’re going steady. He seems to think any of this Greek life shit still matters after Sarah Michelle Geller’s character is thrown out of a window on sorority row. Seems like Derek was at arm day when priorities and common sense were being handed out. Let us also not forget that his best friend was one-half of the murdering duo and he never questioned his alibis or extra-curricular activities. This tall drink of water was doomed from the second he was introduced. Doomed.

Where You Can Watch: Syfy and VOD

It truly takes a village in the Slumber Party Massacre reimagining of 2021. We get a whole cabin of dudes that don’t make sense but are very fun to watch. Each guy, two of which are named Guy, is deliciously useless to our leading ladies. Watching them get picked off one by one is inevitable. However, seeing them in this reversal of the sexist tropes the original movie found itself stuck with is therapeutic. From pillow fights to weirdly timed showers, these beautiful fools were each more precious than the next. If reimaginings can lead to us flipping outdated stereotypes on their heads the way this movie does, then line up the himbos and start taking my money.

Not even going to lie to y’all, I remember not liking this character but also not being able to take my eyes off him. While he spent his run in the sexy shadow of Alexander Skarsgård’s Eric, he was still a gorgeous nuisance in his own right. I binged this whole show not even six years ago and remember very little about this character other than he spent most episodes shirtless. While everyone else in this town had real problems, Jason had his hands full sleeping around and usually getting in the way of Sookie and friends’ plans. In a show of attractive people making poor decisions, Jason is our clear MVP of the himbo squad. I’m going to run his crown to USPS after I finish this article and I hope someone can read him the enclosed instructions.

This movie predates the term himbo by thirteen years but is one of the best examples on any list. Tim Curry’s Dr. Frank-N-Furter not only steals the movie but also builds us the perfect himbo. A himbo for all other himbos to aspire to, if you will. Rocky has a heart of gold, appreciates music, is DTF, and is loyal AF. I hope technology evolves so we can have Build-A-Rocky stores because I would gladly build one of these for my birthday.

Wanna compare himbo notes? Then find me at @misssharai.