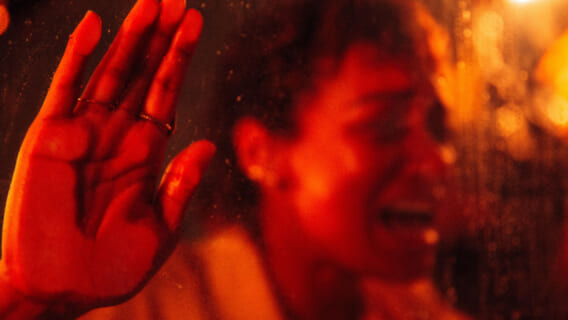 A still from Talk to Me by Danny Philippou and Michael Philippou. Courtesy of Sundance Institute.

When it comes to horror, my tastes usually lean towards frightening yet low-concept works. Talk to Me spoke to those personal preferences from the word go. This debut feature from twin brothers Danny and Michael Philippou can be seen as an Australian punk kid response to the Insidious franchise: simple, scary, and just like the Bride in Black, once it takes hold, it refuses to let go.

Talk to Me concerns a young woman named Mia (Sophie Wilde) who joins her peers at a local party where teenagers allege the ability to communicate with the dead. Wilde’s lead performance, while grounded with familiar emotional subtext, crafts a protagonist whose tragic journey is impossible to turn away from. She delivers a star-making performance that should catapult her into the Blumhouse directories by this time next year.

The setup for horror in this film is simple and tidy. At a party, those interested in experiencing a conversation with the deceased are told to grip an embalmed severed hand, allegedly sourced from the body of a dead psychic. Mia volunteers, and upon touching it, she sees the terrifying face of a sunken, bloated corpse. Mia is used as a conduit for the monstrous spirit, and we watch in gleeful horror as she screeches in anger at the jeering crowd of teens who surround her.

Of course, there are important rules here to be broken. If the human avatar holds the dead hand for longer than a couple of minutes, the veil between worlds thins with chilling repercussions. Chekov’s gun soon goes off in the direction of these young characters who we’ve already grown so quickly attached, and frightening chaos ensues.

In a recent conversation I had with filmmakers Danny and Michael Philippou, they disclosed that part of the inspiration for this film was based on an especially disturbing real-world incident where a young person reacting badly to a dose of drugs was filmed by a laughing crowd. This sickly voyeuristic example of humanity at its worst provides an anxiety-provoking baseline for their debut feature film. This real-life moment, and some of the ones seen on screen, serve as a stark reminder that a crowd doesn’t provide always us with safety. And that the greatest evil of all is often the indifferent gaze of bystanders.

What I appreciate the most about Talk to Me is the effectiveness and relentlessness of its scares. It’s fun, mean-spirited (in more ways than one), and wholly unpretentious. In a horror landscape that often tries to outthink itself with bloated high concepts, this firecracker of a release is refreshingly straight to the point. The dead stares of malignant ghosts will surprise you with their chilling, lingering gazes. And the scariest scene in the film has a vague resemblance to The Further, as seen in Insidious: a glimpse into a putrid, hopeless, and shockingly grotesque afterlife.

With a capable ensemble of young people to aid Mia in her supernatural descent into madness, one of the only adult characters present was always a joy to behold. The iconic Miranda Otto (The Lord of the Rings) lends her regal talents to this feature as a matriarch archetype for the entire ensemble. I would have liked to see more from Otto, as anytime she’s on screen, she commands the audience and the chaotic teenagers surrounding her into submission.

Talk to Me would stand tall among the Blumhouse collection of modern classics if given the opportunity. It’s a fast-paced, terrifying, and always fun vision of supernatural madness. There’s also a strong sense of confidence and identity in the filmmaking here; it never overthinks or pretends to be what it’s not. And why should it? A freshly grotesque ghost story that provides jaded horror fans with a slew of real scares is all I could ever ask for.

Refreshingly low-concept and surprisingly scary, ‘Talk to Me’ grabs hold of you by the wrist and refuses to let go. It’s a nasty, mean-spirited good time from start to finish.