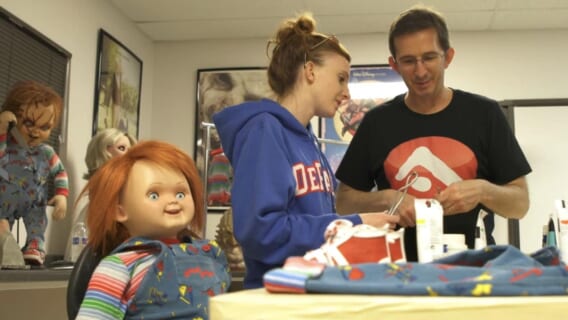 A lot of us say we grew up with Chucky. However, only the lucky few know what Living With Chucky is actually like. Hence a documentary that’s willing to do a deep dive into our favorite murderous doll’s legacy.

Kyra Gardner grew up with our favorite killer doll being a major part of her life. She seeks out the people who make the Child’s Play films as they recount their experiences working on the ongoing franchise and what it means to be a part of the Chucky family. Gardner gets all of the favorites we associate with the franchise, and as a fan, it is fun to see how they all came together. It’s also endearing to see how close they’ve become over the decades, as they are now intertwined in each other’s lives.

Seeing how proud Fiona and Brad Dourif are of each other in their interviews hits you right in the feels. The realization that Brad hadn’t been on set since the first film until he visited Fiona in her first installment, was a bit of obvious trivia that most of us never think about. It’s hard to not tear up while listening to him and Jennifer Tilly talking about how happy Brad was to work with another actor during Bride Of Chucky. They describe recording their lines together, and he still lights up talking about it.

Also Read: ‘M3GAN’ is a Mixed Bag that Delivers in the End [Review]

Another cool side to Living With Chucky is hearing Don Mancini walk us through how this franchise evolved alongside his career. We get answers to some questions we’ve had forever. They also get into how moving production companies resulted in them having to rebuild Chucky from images. They explain why Child’s Play 3 saw a different actor playing Andy even though Mancini and Alex Vincent (the original and reigning Andy) are friends who like working together. This documentary has a lot of information and verbal hugs for any Chucky stan.

We’re all in love with the interviewees in Living With Chucky, but some of their interviews could have been trimmed a bit. Most of us would probably have the same issue because we all want to hang on to every word coming from Mancini, Tilly, and both of the Dourifs. These are talented and charming people that turn us all into fan girls. However, some of the interviews have weird stops when there was a definitive moment transition earlier. Another thing that sticks out is that we spend too much time transitioning from segments. The device of using a VCR and inserting the next movie’s VHS is cute, but it does feel like it takes an eternity at times. Especially during one interview that is paused to do this, but then we come back to what was being said.

Another thing that sticks out in Living With Chucky, is that Gardner doesn’t pull herself in until way too late in the film. We know the filmmaker has to be close to the production, so it’s not a major reveal. However, her dad, Tony Gardner has been doing special effects for the franchise since Seed Of Chucky. This means lots of travel and not being able to be home as much as either of them liked. Because they seem close and even get emotional talking about the milestones he missed for his work, it feels like this is where the real movie is.

We love Chucky, and I imagine it’s hard to find the balance for a filmmaker whose thesis is their relationship to the subject, but this section needed more time. This isn’t to say that it’s not cool to see a bunch of people in the horror sphere pay their respects to the franchise. Or to hear how our favorite franchise family came to be. It just feels like an abrupt shift to something weightier than paying us fan service.

If you have questions about the films of this franchise, or if you ever wanted to see these people we love talk about each like the kind of families we only see on sitcoms of yesteryear, you’ll have some fun with Living With Chucky. However, if you’re a casual fan, it’s probably not going to hit the same.

Let me know if you’ve watched Living With Chucky at @misssharai.

This is a lot of fun for fans of the Child’s Play films. It’s got a lot of fun tidbits, and good vibes, as it leads us through how the movies were made and the influence they had on the people who made them.