‘M3GAN’ is a Mixed Bag that Delivers in the End [Review] 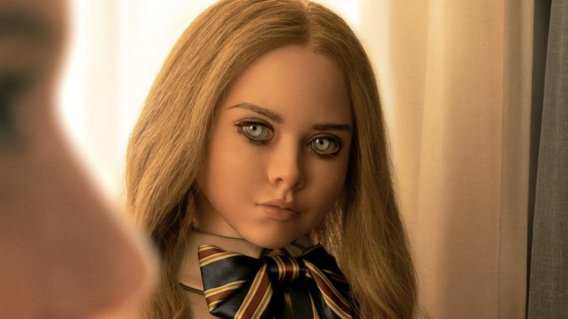 M3GAN ultimately works. But it doesn’t work as well as I’d have liked. The film is at its best when its titular character is up to various forms of criminal mischief. However, the entire first hour of the flick plays out very much like a family drama. And there isn’t a great deal of tension building during the first two acts. We are primarily spending time with the orphaned Cady (Violet McGraw of The Haunting of Hill House) and her aunt Gemma (Allison Williams of Get Out) for the first two-thirds of the picture. And neither is depicted as particularly engaging.

The film follows Cady and her parents as they set out on a ski trip in the Pacific Northwest mountains. But inclement weather sees the family of three losing control of their SUV and crashing. Cady survives with only minor cuts and bruises and is placed in the custody of her aunt Gemma. Gemma is a toy designer, specializing in AI-based tech. Frazzled from job-related stress and suddenly being saddled with parenting duty, Gemma introduces Cady to a prototype she’s been working on, a doll called M3GAN that can learn from interactions with her playmate. The pairing is initially a success but when M3GAN begins to behave unpredictably, Gemma wonders if she has made a grave mistake.

Also See: TikTok Is Obsessed with the Chucky Vs. M3GAN Twitter Drama [Video]

As viewers, we know Cady has suffered a devastating trauma. But she keeps her feelings pretty close to her chest. That’s a fairly realistic reaction to grief. But the problem here is that it’s difficult to make a meaningful connection with her on that basis. As for Gemma, it seems she means well. But she’s clearly not ready to be a parent and doesn’t seem to show a whole lot of empathy for her grief-stricken niece. That leaves M3GAN as the most relatable character of the central trio. And she’s a toy.

I spent most of the first two acts waiting for something to happen. The film relies on the central character relationships to carry the narrative until things get spicy. But with protagonists that come across as somewhat two-dimensional, I found myself a little bored.

The action I was craving did eventually materialize in the third act. But it is almost entirely implied. Each kill sequence features a cutaway and very little, if any, bloodshed. Moreover, I was holding out hope for a montage featuring M3GAN on a massive rampage but that never materializes.

I was also a bit letdown that we see very little of the inciting event that finds Cady an orphan. I don’t mean that I wanted to see more brutality. It’s more so that the accident afforded the filmmakers an opportunity to make an impact on the audience and give the viewer an idea of the despair Cady was feeling. But we don’t get that. And that is one of the chief reasons I felt a disconnect from child protagonist Cady. She’s experienced this traumatic loss. But we don’t really get to see through her eyes. Perhaps director Gerard Johnstone wanted to keep things light. But glossing over the tragic event makes it hard to relate.

I was also left wanting a bit more tension and some additional carnage. Other than a couple of swear words, the film doesn’t even begin to test the boundaries of its rating. M3GAN is a fairly soft PG-13. That will likely give it some additional crossover appeal to mainstream moviegoers. But it came as a bit of a letdown to me as a horror fan.

Also Read: ‘The Apology’ Is A Grisly And Shocking Christmas Tale [Review]

Criticisms aside, the most effective part of the film is the comedy. Akela Cooper’s script is filled with dark humor and camp, with a large number of the jokes landing quite effectively. That doesn’t entirely make up for the absence of chills in the first two acts or the underdeveloped key players. But I can honestly say I laughed early and often. That, combined with the eventual build to an exciting conclusion made the film worth my time.

I also found the messaging regarding our society’s reliance on technology and the price we pay for convenience to be well played. It’s something most of us rarely stop to think about. But we put so much faith in tech, often without considering the potential risks associated. While it seems like a reasonable trade and one that I willingly make, it’s good to give some thought to the potential repercussions both now and in years to come.

So, while I can’t say that M3GAN knocked my socks off, I can say that I think horror fans will find enough about this campy film to enjoy to make it worth the price of admission. M3GAN will bow in theaters on January 6, 2023.

In spite of a slow start, M3GAN delivers in the end.