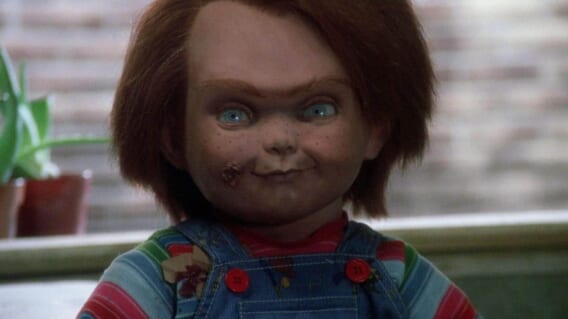 As of the publication of this post, the Child’s Play series has amassed an impressive seven films, one television series (with at least two seasons), two short films, and—maybe its greatest achievement—remained locked into its original timeline despite a 2019 remake. In an age when every horror icon has been remade, rebooted, “re-queled” or turned to refuse Chucky continues to prove you can’t keep a Good Guy down. The diminutive doll is known as much for his sharp weaponry as he is for his sharp wit.

But way back when, long before turning into a pop culture icon, he was Charles Lee “Chucky” Ray, a notorious serial killer with few funny bones. Veteran horror writer-director Tom Holland brought series creator Don Mancini’s story to life, delivering a chilling psychological tale of a lonely young boy who only wanted a best friend to the end. Subsequent entries have their legions of fans and detractors, with tones ranging from standard slasher to all-out satire, but none have managed to match the abject creepiness of Chucky’s first foray, Child’s Play (1988).

Andy Barclay (Alex Vincent) is a six-year-old latchkey kid living with his mother, Karen (Catherine Hicks), in a small Chicago apartment. The only thing he wants for his birthday is a Good Guy doll. But Karen isn’t making enough money at her department store job to afford a pricey toy. Luck shows up in the form of a scummy street peddler who sells Karen a “used” Good Guy for a bargain basement price. But what she doesn’t know is just days earlier notorious serial killer Charles Lee Ray (Brad Dourif) transferred his soul into the doll after being shot by Detective Mike Norris (Chris Sarandon). Andy now has a new buddy, “Chucky”, to keep him company. Only instead of playing with his tool set or spouting off pre-recorded phrases this doll wants to seek revenge on those who wronged him and kill anyone else in its way. Most of these hijinks are chalked up to Andy having psychological issues and potentially deeper problems because, after all, who’s gonna believe a doll is committing murder?

Despite the fact that we, the viewer, know Chucky is the malevolent force watching the story unfold as adults make their own discoveries is the driver of fear. Chucky is treated like the shark in Jaws; we see actions from his POV until the frightening moment when Karen opens his rear compartment and finds the talking doll contains no batteries. It isn’t until she threatens to throw him into a fire that Chucky reveals himself. Similarly, Det. Norris doesn’t believe a word about the doll being alive until Chucky makes an attempt at his life. But even then, despite Mike being a cop, the question still remains: “Who is going to believe this?” Andy is just a kid with no understanding of how the real world operates, so to him, Chucky is simply a talking doll that has chosen to be friends. His claims are instantly dismissed by everyone, inadvertently making himself an unlikely suspect.

Child actors are hit or miss and Alex Vincent fits into the former category. His performance is genuine and he’s never annoying, which is all I need out of most kids. Where the casting shines is with Catherine Hicks, Chris Sarandon, and Brad Dourif. Did you know Dourif wasn’t the first choice to voice Chucky? Mancini initially hired Jessica Walter, best known as Lucille Bluth on Arrested Development (2003-2006, 2013-2019). Thankfully that didn’t work out and we got Dourif’s perpetually pissed-off, pained take on a full-sized serial killer suddenly trapped in a three-foot-tall body. So much rage.

Hicks is the stereotypical working mom trying desperately to keep her son happy, working overtime and saving up what little money she has to buy him practical gifts kids hate, like new pants. She sells every emotion so well, from the shock of her best friend dying to confusion when Andy is seemingly made a suspect. But it’s her unbridled fear once Chucky reveals himself that puts her performance over the top. As for Sarandon, he’s cool and firm and pragmatic, even once Andy’s doll is proven to be the one behind it all.

By my unofficial count Child’s Play has had over a dozen home video releases on Blu-ray alone. But the best version prior to this was the Scream Factory Collector’s Edition. Now, Scream Factory has gone back to the original camera negative and produced a fresh scan in 4K, making that transfer available on both Ultra HD disc and the included Blu-ray. Don’t expect a revelation from the 1.85:1 2160p picture. But the image does improve upon the 1080p presentation in subtle-yet-clear ways. Definition and textures appear tighter and crisper. Colors are slightly more robust and deeply saturated. Shadow detail and nighttime scenes offer improved detailing. Don’t expect to see a shiny, grain-free image just because this is 4K, though. Film grain has always been thick and that’s how it’s always going to be.

Joining the previously issued English DTS-HD MA 2.0 and 5.1 tracks is a fresh Dolby Atmos mix which, just as with the 4K transfer, offers some minor but marked improvements over the original tracks. Scenes with more action, like Charles summoning storm clouds over the toy store or the crack house explosion, have additional support from height speakers, giving greater immersion to the sound field. Joe Renzetti’s score is brooding and sinister, full of harsh sounds and dissonant cues, creating a dismal atmosphere that complements the urban environment. Dialogue comes through clear and direct. No issues detected. Subtitles are available in English SDH.

The UHD disc contains only audio commentary tracks, but there are four of them: director Tom Holland; actors Alex Vincent and Catherine Hicks, with “Chucky” designer Kevin Yagher; producer David Kirschner and screenwriter Don Mancini; finally, a select scene commentary with Chucky himself.

Disc two contains the feature film on Blu-ray, along with all four of the audio commentary tracks listed above as well as the following new features:

“Birth of the Good Guy – An Interview with Writer Don Mancini” (1080p) runs for 12 minutes and 7 seconds. Mancini is the ideal subject because he has such intimate knowledge of the production and development. He covers a lot of bases in such a short time.

“Friends Till the End – An Interview with Actor Alex Vincent” (1080p) runs for 15 minutes and 12 seconds. This piece covers much of Vincent’s early career, his experiences working with the cast, acting alongside a doll, and much more.

“Believe Me Now? – An Interview with Actor Chris Sarandon” (1080p) runs for 10 minutes and 41 seconds. The legendary thespian talks about his approach to the role, how Holland ran the set, shooting with the doll, and more.

“Chucky the Great and Terrible – An Interview with Producer David Kirschner” (1080p) runs for 26 minutes and 1 seconds. Never at a loss for words Kirschner has plenty to say about his own career as well as the development and physical production of this first film.

“Windy City Chills – An Interview with Production Manager Robert Latham Brown” (1080p) runs for 5 minutes and 33 seconds. Features the P.M. talking about his own unique experiences working on this film and how it has held up in the years since.

The third disc in this set contains all the legacy features previously found on the Collector’s Edition:

– “Behind the Scenes Special Effects Footage” (1080p) runs for 1 hour and 8 seconds, featuring camcorder footage of Chucky being controlled by a small army of FX technicians, as well as some interview footage and other SFX gags.

“Howard Berger: Your Special Effects Friend Till the End” (1080p) runs for 40 minutes and 53 seconds. This is an in-depth interview with the FX legend about his work on the film.

“Life Behind the Mask: Being Chucky” (1080p) runs for 40 minutes and 2 seconds, featuring Ed Gale, one of the little people tasked with helping to bring Chucky to life.

“Evil Comes in Small Packages” (1080i) runs for 24 minutes and 49 seconds, this is an archival piece that’s been around since the film’s first Blu-ray release.

“Chucky: Building a Nightmare” (1080i) runs for 10 minutes and 5 seconds, another legacy piece with some redundant information.

“Introducing Chucky: The Making of Child’s Play” (1080i) runs for 6 minutes and 15 seconds, showcasing the various ways in which Chucky is brought to life.

“Vintage Featurette” (1080i) runs for 4 minutes and 54 seconds, this is a standard EPK with some behind-the-scenes material.

The theatrical trailer (1080p) runs for 2 minutes and 2 seconds.

Still the most unsettling and genuinely frightening entry in the series, Child’s Play finally has a definitive version on home video. Scream Factory has beefed up both the video and audio quality, and the new bonus features swell an already stacked package. Highly recommended.