‘Medusa’ Is The Fun and Feminist Film We Deserve [Review]

It's a girl gang! 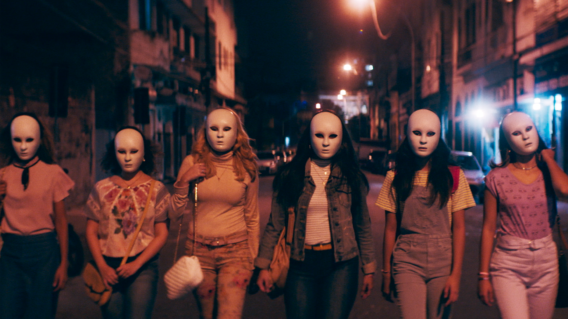 Anita Rocha da Silveira’s sophomore feature, Medusa, is a wildly fun, sleek, and energizing vehicle for feminist fury. It is satire, it is moody, it is sugar and spice. However, it also asks us to look at our relationship with the patriarchy and how we hold each other back with outdated notions we can’t let go of. Medusa is a better version of what I thought Neon Demon would be. It has hints of Saved and an almost Donnie Darko-esque dream-like filter. It is a pastel-lit Heathers moment that is hard to capture in words.

Medusa introduces us to Mari (Mariana Oliveira) and Michele (Tremouroux). They’re two friends that are part of the purity girl group at their church. They are supposedly prime examples of piety and on the express bus to heaven. However, at night they roam the streets with the other girls in the group, attacking women who do not align with their overzealous views. When one of the attacks goes wrong, Mari gets scared, and people begin to treat her differently. This leads her to some major self-reflection and an overdue journey to self-discovery. Everything she thought she knew unravels because of the scar on her face. This leads her girl gang to start doubting her commitment to Sparkle Motion.

Mari begins to ask questions and think for herself in a world where women should be seen and not heard. Michele and Mari begin to grow apart because Mari is no longer part of the good girl aesthetic. This distance gives us a very welcome look at internalized misogyny and how women turn on each other. It is in Mari’s relationships with the other girls, specifically Michele, that this movie cements itself. Because how do we call out men who label women as monsters without looking at the women who help paint that narrative? Looking at SCOTUS for the most recent examples in the news…

Medusa is a rage-filled ride in a Barbie convertible. The anger is simmering, but not boiling. Even when they are attacking other women in the street it feels like we are just skimming the surface. This is because this girl gang does not understand what they should actually be mad at are the systems in place that they are merely perpetuating. Until this moment they were fine repeating what they were taught and taking their place on the conveyor belt to a husband and kids. They had never thought to ask what they could do for themselves instead of what they could do for their church. These questions set an identity crisis in the angelic Michele. Who has never asked herself why she is who she is. This also leads her to look at her relationship with the Lord, as well as with Mari.

This is enough to make a girl scream. This is exactly what Mari and Michele do when one of their performances goes off the rails and shit gets too real at the church service. This sets off an amazing sequence of other women screaming and a church fight breaking out. This scene is possibly my favorite scene in the whole movie. I felt it in my bones even while laughing and cheering. This bubbling over of too many emotions while trying to unpack what you thought you knew versus what you know now is very hard to capture on film. However, Medusa gives it to us and lets us see the resulting mayhem. This movie is the kind of fun and provocative film that holds us accountable for how we fail ourselves when we do not ask why we go along with systems that don’t serve us. This movie is a compellingly damn good time.

Let me know if you dug Medusa as much as I did at @Misssharai.

This is a neon pop-punk satire of a fever dream. It’s a genre-defying ride that you’ll immediately want to go on again.