'Confession' is a worthwhile remake of 'The Invisible Guest' anchored by a phenomenal Yunjin Kim. 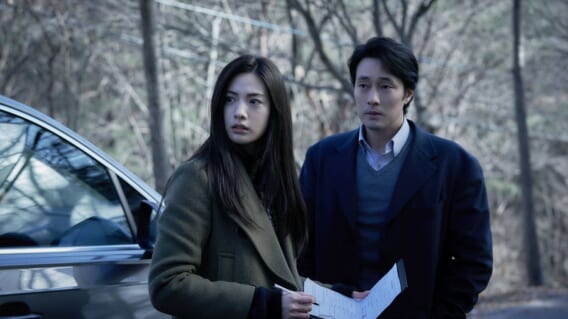 Salvation is never painless. Those are the words attorney Yang Shin-ae (Yunjin Kim) utters to Yoo Min-ho (So Ji-seob) as they prepare for a middle-of-the-night deposition on the eve of new witness testimony. Yoo has been accused of killing his girlfriend, Kim Se-hee (Jin-Ah Im) in a hotel room. There was no one else there, though Yoo maintains his innocence. Yang, the best criminal defense attorney in the area, bargains her commitment to represent Yoo for his unmitigated truthfulness. His honesty, in truth, is the path to his salvation.

If the plot of Jong-seok Yoon’s Confession sounds familiar, it’s because it probably is. A remake of Oriol Paulo’s Spanish-language The Invisible Guest—the best murder mystery of the century this side of Gone Girl—Confession largely follows most of the same beats. Almost Rashômon in structure, Yoo reveals what he knows while Yang recontextualizes the events that led to Kim’s murder. Key evidence is revealed and then twisted through dialogue, with Yang narrating how else it might have gone.

As the evening closes in, Confession develops into cat-and-mouse legalese, with Yoo resistant to being fully transparent when threatened by Yang’s cunning awareness that he’s still withholding. Fans of the original won’t find much new here aside from some welcome nuances and a bevy of strong performances. Yunjin Kim in particular, best known to Western audiences for her role in Lost, is an indominable force. Frighteningly intelligent and perceptive, audiences only ever see her, at least at first, from Yoo’s perspective. It’s never quite clear where she’s going, especially once Yoon introduces the sundry twists from his source material.

Much like the original, little of it would stand up to intense scrutiny. Such is the reality of twist-heavy mysteries. Logic can rarely surprise, so wild machinations of the mind and all-too-convenient coincidences fill in the periphery of jaw-dropping swerves. Luckily, Yoon has rounded out Confession with a supremely talented cast and some stunning Noir-esque digital photography to propel Confession forward, even as familiarity and convention creep in.

That familiarity is both Confession’s greatest strength and weakness. There’s no denying the efficacy of Paulo’s The Invisible Guest. Remarkably well-received, it was a word-of-mouth powerhouse. Everyone everywhere was telling someone to check it out, and at the time, it’s reckless commitment to subverting expectations at every possible turn was nothing if not inspired.

In recent years, however, the murder mystery mechanics have been aped ad nauseum, most successfully in Rian Johnson’s Knives Out, and Confession’s key twists aren’t quite what they used to be. They are still wickedly effective, however, especially for unsuspecting audiences unfamiliar with either the original or several other remakes.

Yet, for audiences who have seen Paulo’s film, Confession has very little new to offer. It’s a pretty strict remake aside from a misguided effort to further confound the foregone conclusion. More conventional thriller elements take root, ones both Yang and Paulo had wisely avoided until then. The third-act departure offers something fresh, though in this case, fresh isn’t always better.

It puts Confession in an awkward position then. In some ways, Confession is the superior version of Paulo’s work, largely on account of Yunjin Kim’s performance and expanded role. In others, especially efforts to differentiate itself in the endgame, Confession pales compared to the perverse simplicity of Paulo’s own conclusion. For those unfamiliar with the original, however, Confession is more than worthy as an introduction. That is to say, Confession successfully competes with its progenitor.

Audiences already familiar with the source is another matter entirely. The mechanics of the story are such they work most effectively the first time. With a predominant interest in surprising the audience, there’s very little in either to warrant a second watch. A longstanding folly of mysteries in general, Confession suffers more so on account of just how integral surprise is to its momentum. Without it, no amount of Yunjin Kim could compensate for how little remains. First time watchers are in for a treat, however. Shocking, heartbreaking, and fiercely inventive, Confession might not make the case for its independent existence, but it remains devilishly fun nonetheless.

Confession is a worthwhile remake of The Invisible Guest anchored by a phenomenal Yunjin Kim.