Sure, the movie is a misfire, but Craven fans will still dig this new release. 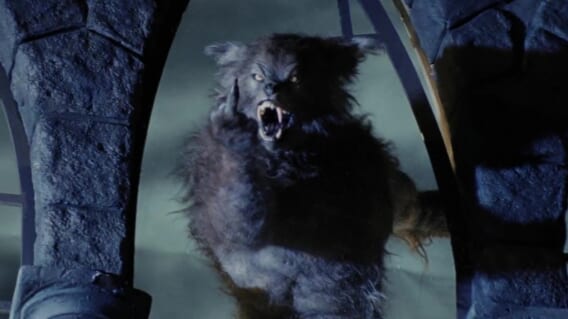 The jokes about Wes Craven’s only foray into werewolf territory (sadly) write themselves with a title like Cursed (2005). Problems famously abound, with Craven having to basically film the entire thing twice, making massive changes to plot, characters, special FX, even the rating. Basically, just about everything other than the two leads.

Rumor has it Wes shot all he needed for his first cut (except the ending) before the reset button got smashed by those fat Weinstein fists; only about 25% of that footage was repurposed for the new version. Editor Patrick Lussier has said three distinct edits of the film have existed. So, the potential was there for Wes to reassemble some approximation of his original intentions for this release… were he still with us today. Since he is not, the best Scream Factory can offer is the previously-seen unrated cut, which does add in some much-needed gore. But the end result is the same cinematic dud. Maybe one day something closer to Wes’ vision will see the light of day…

Ellie (Christina Ricci) and Jimmy (Jessie Eisenberg) are siblings who get into a car accident with another woman (Shannon Elizabeth) on a winding stretch of road outside Los Angeles. Brother and sister are shaken up but otherwise alright. However, the woman is attacked by an animal that rips her in half. Ellie and Jimmy each have a brief encounter with the animal, too. But, they both, fortunately, walk away unscathed aside from some minor scratches. This “animal” was, of course, a werewolf. Now, brother and sister have to deal with unexpected cravings and newfound abilities while trying to live their normal lives. What makes this more difficult is the drama within the werewolf community as a villainous wolf sets its sights on the siblings.

It sucks something like this had to happen to Wes Craven. I have to believe his take on the material would have been more intelligent and emotionally satisfying than this Frankenstein’s monster of an edit that attempts to conjoin three narratives into one. Story beats lose their sense and purpose, characters change unexpectedly, special effects are inconsistent or poorly rendered, and there’s no depth to any of it. The movie also messes with werewolf lore a bit (which, granted, isn’t gospel or anything).

The Weinstein brothers made the decision to CGI over Rick Baker’s werewolf effects (a true mortal sin) and those done by KNB, claiming the wolf didn’t look good. The stuff Baker did looks rad. But KNB’s leaves something to be desired, though I heard it was a major rush job and that would make sense. One thing is for sure, both practical wolves look a helluva lot better than the video game cut scene quality of the CG beasts.

The kills are fairly toothless, too. I thought some inventive gore might save this one after seeing what happens to that woman in the opening. But past that most kills are either cutaways or look purposefully rushed to secure that PG-13 rating. Supposedly all of the kills were done in full on set – as you’d expect on a Craven film – but the Weinsteins were going for that teen audience and neutered the film accordingly.

A better version of this film may exist but the odds horror fans will ever see it are slim to none. Without the involvement of Wes, it seems a moot point anyway. Cursed is an entirely uneven film all the way through, with its only saving graces being Craven’s always assured direction (however hampered it may be), a few good actors, and for some reason, I kinda like the early ‘00s aesthetic. Although I will say the music on the soundtrack hasn’t aged well. Worth a watch if you’re a Craven completist, but if you want a legit werewolf feature seek other options.

At least we’re getting a fresh 4K scan of the original camera negative, delivering a pristine 2.40:1 1080p image. Film grain is a fine sheen over the picture. Colors are strongly saturated. Black levels hold firm. The only real issue is how bad some of this CGI looks, and nothing can change that. Scream Factory presents a clean, stable image that is a clear improvement over previous releases.

There are English DTS-HD MA tracks in both 2.0 and 5.1 available. Right from the opening, the multi-channel track has a clear advantage; when the werewolf is stalking the car crash victims there is rustling heard from all corners of the room, offering standout direction from the mix. The soundtrack is all rock and metal songs and they’re appropriately loud and in your face. There’s a good sense of weight to the track – sound effects are genuine, attack scenes have power, and howls resonate. A solid offering. Subtitles are available in English SDH.

Select scenes with commentary by Greg Nicotero are included for the following:

“A Wolf in Sheep’s Clothing” (1080p) runs for 13 minutes and 57 seconds, this is an interview with Derek Mears, a creature performer who wore the werewolf suit.

“A Movie that Lives Up to the Title” (1080p) runs for 17 minutes and 57 seconds, editor Patrick Lussier talks about all of the changes and differences between the various versions. One interesting fact is producer Joel Soisson shot a lot of the new footage, just as he once did when William Lustig walked away from Maniac Cop III: Badge of Silence (1993).

“Behind the Scenes: The Making of Cursed” (SD) runs for 7 minutes and 33 seconds.

“The Cursed Effects” (SD) runs for 6 minutes and 45 seconds.

“Becoming a Werewolf” (SD) runs for 7 minutes and 58 seconds.

A theatrical trailer (SD) runs for 1 minute and 42 seconds.

It’s a real shame Wes never got to make the film he had in mind, leaving this tainted exercise in studio interference as part of his legacy. Scream Factory has provided the best a/v quality available along with some new bonus features that shed a bit more light on the production’s woes. Misfire that is it, Craven fans will still want this disc for their collection.