'House of Darkness' manages to make a home of its own within a well-worn horror subgenre. 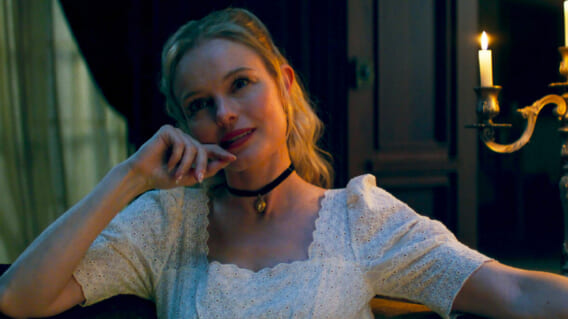 Neil LaBute’s House of Darkness takes full advantage of its fairytale setup with fun and frightening ease. The seasoned playwright and filmmaker returns to horror with a bold new title ready to take a bite out of a few familiar tropes. Part intimate two-hander, part retelling of a classic gothic horror story we all know so well, LaBute’s latest manages to make a home of its own in a well-worn subgenre with originality, tension, and charm.

The film sees Justin Long and Kate Bosworth alone for the majority of its first two acts, and it’s a treat to behold. The setup is simple. Long is escorting Bosworth from a downtown bar to her isolated country home (more of a castle really) out in the remote woodsy suburbs. He can hardly believe his luck. A gorgeous, seemingly horny, woman wants him in her mansion for sex and conversation and … maybe even a possible relationship. He doesn’t even stop to consider his own personal safety until things take a considerable turn towards weird. The commentary here about male privilege is clear but not completely obvious. A woman would likely not be afforded the same comfort if she were alone at a secluded estate with an eccentric stranger. But Bosworth is small, beautiful, and altogether femme so Long doesn’t even consider that she might have nefarious intentions. The audience, however, has suspicions about her from the word go.

LaBute is toying with Long just as he toys with his viewers. The opening shot in House of Darkness is of a gothic iron gate; when the title card appears in Hammer-style text across it we’re tricked into believing this could be some sort of period piece. The illusion is shattered, however, when a four-door sedan pierces the screen. It’s also clear that Mina (Bosworth) is similarly toying with her unnamed date (Long). She teases and flirts, all while keeping a focused eye on his every word and move. She manipulates him into sharing his true intentions, his obvious fantasies, and his self-serving agenda. But Long only sees her as an object of fantasy, a well-meaning (if not a little bit spooky) manic pixie dream girl who wants him so badly, that she isn’t even playing by the social rule book any longer. But he’s wrong.

Bosworth deserves much credit for the success of this horror story. Like its setup, audiences will similarly be familiar with her and her history of mainstream success. Some even may be willing to count her out due to her resume of iconic teen roles, such as Blue Crush, Win a Date with Tad Hamilton, and 21. But counting out Bosworth is a dangerous act. She glides through the romance, sexual tension, and horror with power, and elegance that fans of The Rules of Attraction will be unsurprised by. Plainly, she steals the show. No matter the ultimate twist or outcome, she’s a very large spider toying with a very small mouse and it’s very satisfying and scary to witness.

While the women of this story are worth the price of its admission, it’s tough to ignore some of the glaring elements which ultimately quilt them together. House of Darkness is a story of women’s rage, and it tetters grimly into the landscape of rape-revenge. Long is the archetype of the nice guy who is ultimately selfish, misleading, and possibly predatory. The nuances of the nice guy were on full display in 2020’s Promising Young Woman, a story crafted and delivered by women. But House of Darkness comes to us from men, and it’s difficult not to wonder if this is a story we really need to see from a male filmmaker. Could these complexities of horror, romance, and comedy still work without the hint of rape-revenge? It’s not for me to say, but it did cross my mind.

Having seen House of Darkness prior to the unleashing of its marketing campaign, I was able to enjoy the film the way I believe it was meant to be received: as a mysterious two-hander full of tension and clever misdirects. While I always had a strong inkling of which way the story was headed, its brilliance was in how it made sure I kept second-guessing myself. Could Mina honestly be interested in Long’s desperate everyman? Is she a natural predator, lurking upon her prey? Unfortunately, the trailer will clumsily cast aside all questions of suspense. I urge all interested in this fun horror story not to engage with its marketing materials. Go in blind and you’ll be rewarded.

Neil LaBute’s ‘House of Darkness’ manages to make a home of its own within a well-worn horror subgenre with originality, tension, and charm.