As a whole, 'Woodland Grey' flounders when it should be soaring. 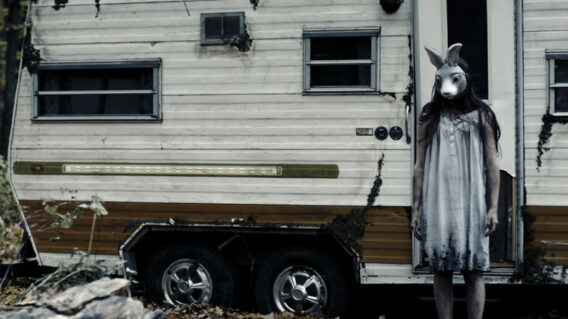 Some movies are frustratingly obtuse to their detriment. They wallow in weirdness and strange occurrences to the point that they never fully engage the audience. A hallmark of ostensible “elevated horror,” it’s difficult to assess whether this approach is budgetary aftershock or a deliberate filmic choice. Wooded horror is especially fond of this approach because the woods are innately scary. They house rural cannibals, odd scientists, and even Ms. Blair Witch herself. Ben Wheatley’s In the Earth was a festival breakout when it was released in April 2021 after a stellar Sundance premiere. It was moody, gothic, and convincingly strange. Adam Reider’s Woodland Grey, which he co-wrote with Jesse Toufexis, wants to be this year’s In the Earth. It makes a valiant effort, though it too consistently works against the audiences’ interest for a movie that, ultimately, amounts to being pretty grey itself.

Woodland Grey opens with William, a man living off-the-grid in a sequestered RV. He goes about his day at a laconic pace, setting traps and preparing meals, checking off every “what do men who live in the woods do” box along the way. The music is tense, replete with discordant strings and chords, though it’s antithetical to the action on screen. Music and visuals must work in tandem, and an unsettling musical score can’t make the mundane minutiae of a woodsman any more frightening. Eventually, he eyes a locked shed behind his home, the music swells, and the scene cuts to black. The shed, audiences are led to believe, houses something terrifying.

Eventually, he finds an injured Emily (Jenny Raven), a young woman who has gone full Cheryl Strayed after the death of her grandfather. Far from simply being lost and hurt, Emily needs regular dialysis to live (though Woodland Grey rarely uses this to build any tension or urgency). Tense at first—William is intent on not letting Emily leave until she’s recovered—the two soon develop an uneasy rapport, especially once the truth of what’s hidden in the shed comes to light.

From there, Woodland Grey settles into its groove which amounts to… not much. Abounding with flashbacks and dream sequences, Woodland Grey has little tangible for audiences to latch onto. When everything amounts to a beat from the past or a conspicuous hallucination, the central threat remains frustratingly opaque. While psychological unraveling is a common horror trope, neither William nor Emily—despite the actors’ best efforts—are developed enough for it to work. Painted in broad horror brushstrokes, the horrors they’re subjected to feel too impersonal to really resonate.

Reider endeavors to make it all work, and in short bursts, it certainly does. Animal masks are always frightening, and the woods themselves—beautifully filmed—work well enough to cultivate an atmosphere of quasi-fear and uncertainty. As a whole, however, Woodland Grey flounders when it should be soaring. The scares are almost nonexistent, and the third act acceleration is too unclear and jumbled to work in any conventional sense.

Woodland Grey will likely find an audience, especially for fans of Wheatley’s aforementioned breakout or the likes of High Life and sundry other two-character horror shows. For most, however, it simply feels incomplete. There’s a nugget of a paranoid dreamscape hidden within, though it’s buried beneath too much forest bed detritus to truly shine.

Woodland Grey is a familiar hodgepodge of paranoid, wooded terrors that never quite lands