Fantasia 2021: HOTEL POSEIDON Review – You Can Check In But You Can’t Check Out 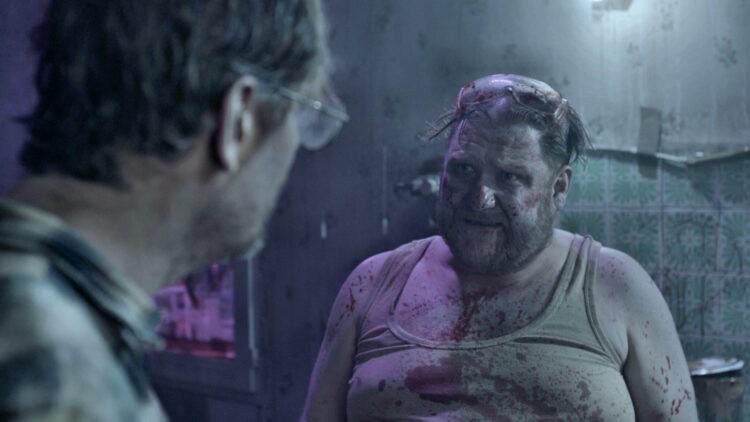 Like the titular establishment, the film’s visuals show a dilapidated and filthy world that traps guests inside its walls. It has great bones though and the adept filmmaking helps create a hypnotic effect, especially when Hotel Poseidon goes from just being a little eccentric to becoming totally insane.

Starting with a bizarre morning routine where a half-dead looking man named Dave (Vermeir) dresses himself in a soaking wet button-down, it becomes quickly apparent that things just aren’t right inside the Hotel Poseidon. Whether they’re coming or going, everyone looks malnourished and ghostlike; everything inside is in some sequence of decay. When Nora (Sluiters), a peppy but pale-faced newcomer comes ringing the bell, a new spark is lit in Dave. But it’s not enough to free him from an inevitable downward spiral into a more hellish version of his already drab setting.

Filled with a myriad of characters, everyone’s sole purpose is to drive Dave crazy until he breaks out from passivity. Bubbling up, actor Tom Vermeir shows the path to an inevitable breaking point as Dave travels room to room. Through a series of vignettes that get increasingly weirder and more horrific, the eventual ending feels like something akin to the finale of Aronofsky’s Mother! or Ben Wheatley’s High-Rise.

Hotel Poseidon actually does feel like an absurdist take on a J.G. Ballard novel. It has the soul of a clown but that sense of comic innocence gives way to a kind of nightmare logic that’s more concerned with finding the breaking point. Once the hotel gets thrown into even more chaos because of money problems, the building transforms again into a night club housing rambunctious students that do nothing but rage and agitate.

To be clear, the ending doesn’t feel uncomfortably tense. There’s a dreamlike quality to the entire film where you never really feel in danger. That’s in large part due to the music cues. Melodic performances like “In Silence” from the band Blackie & Oohoos and King Dick’s polka inspired tune “The Sex” put you in a relaxed state and keep you smiling. King Dick’s little ditty, especially, should have you humming to what sounds like a song Leonard Cohen would write if he stole a Casio from a Montreal pawn shop.

Expertly staged, Lernous’ breakout direction feels like interactive theatre. Looking at the poster, it simply states that this is a film by Abattoir Fermé. An ensemble group out of Belgium, Lernous, Vermeir and Sluiters are all members and their film is ultimately a form of performance art. It’s a show I would gladly participate in and this team of players, including Stef Lernous, have definitely tapped into something special and primitive here.

See the trailer to Hotel Poseidon below!

Hotel Poseidon feels like an interactive fever dream that combines a theatrical experience with the stuff of nightmares.