In his review out of Fantasia 2021, Chad Collins calls the sci-fi drama FOLLOW THE LIGHT "profoundly tender" 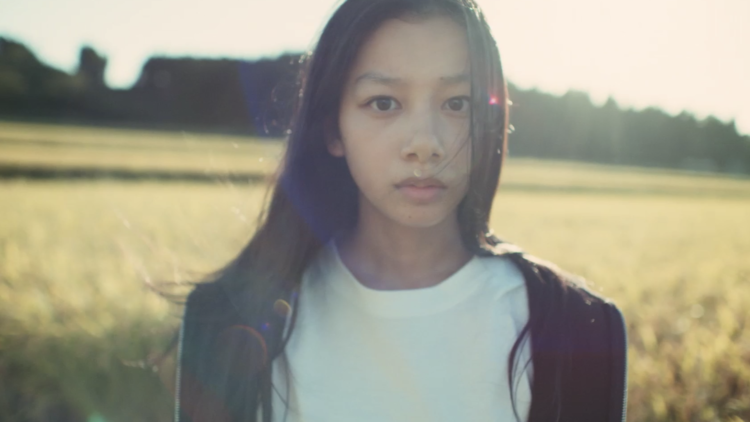 
“I wish a meteor would come and destroy earth,” Akira Nakajima (Tsubasa Nakagawa) utters to himself at the start of Yoichi Narita’s tender, low-fi drama. Akira isn’t quite so lucky. There are no meteors or alien invaders poised to abduct him from the enervating ennui of his new rural Japanese town. As pretty as the rice paddies are, the muted pastoral landscape holds little thrill. The promise of cherry blossoms in the spring seems fleeting, and the ancillary cast seems no happier. Poverty, grief, and decay abound, including, most prominently, the imminent closing of Nakajima’s junior high school in just a month.

Nakajima’s only minor pleasure is glimpses of Okamoto (Itsuki Nagasawa), a quiet, enigmatic young woman who spends her days perched atop her uncle’s roof, staring into the infinite vast of night. I say that deliberately because Yoichi Narita’s Follow the Light is a considerably dourer, though no less deeply felt, sci-fi drama than last year’s sensational debut. A first-act foray into radio towers and strange frequencies signal the arrival of a mysterious crop circle in Okamoto’s uncle’s rice paddy. Promises of full-bore science fiction, like The Vast of Night, remain peripheral. Instead, Follow the Light is principally concerned with its young protagonists and the promise they see in the stars; the promise that a world beyond their own might hold.

Lens flares lend an otherworldly, incandescent look to the flat rural setting, and both Nakajima and Okamoto talk in circles, pontificating on their place in the world and saying what needs to be said without saying much at all. The title card doesn’t appear until twenty minutes in, and Follow the Light is no more concerned with getting anywhere at all after that. There are minor-key traumas and adjacent tribulations, including foreclosure, abandonment, and death, though the closest thing to a driving narrative force is Nakajima’s consignment to sketching his entire class for a school mural intended to commemorate their final days.

At times, the lack of urgency is frustrating, especially in a now all-too-common series of endings, where each scene ends definitively before brusquely thrusting the audience into yet another conclusive chapter when the notes hit in the preceding section were sufficient to conclude on. It helps that the young cast feels so authentic. The verisimilitude of their routines and dialogue elevate the more inconsequential beats. Much of it feels real, but real doesn’t always equate to dramatic urgency.

The soft buzz of the burgeoning lo-fi romance, however, is distinct enough to work. With sci-fi trappings merged with raw YA sensibilities, Follow the Light matches the slow rhythms of country life, abounding with symbolism, murals, and folksy musical interludes. There’s personality to every character, and the soundtrack is elegiac and soft, enough to trigger a tear or two during Follow the Light’s more dramatic beats.

Still, there are interludes that amount to little at all, and at the end, Follow the Light takes its puzzle a bit too far, asking the audience to make sense of its sundry clues and assemble it into something that unifies a disconnected whole. Breadcrumbs about crop circles being an inspiration for the future and classmates being alien, while thematically compelling, feel like last ditch efforts to cement Follow the Light’s more fantastical elements.

Nonetheless, Follow the Light is poised to be one of this year’s Fantasia Festival’s most tender, sweet, and heartfelt premieres. A genre mashup of angsty teen drama, indie dramatism, and elevated sci-fi iconography, it’s a worthwhile coming-of-age saga with enough genre tropes sprinkled throughout to yield considerable crossover appeal. Alongside The Vast of Night, it represents an exciting new humanistic approach to science fiction where what’s grounded feels profound and the wonders of space are refracted in the wonders of life down on earth.

Follow the Light is a profoundly tender and dramatically distinct coming-of-age, sci-fi saga.