In his 5-Star review of THE SUICIDE SQUAD, David Gelmini extolls the film's "bucket loads of gore"! 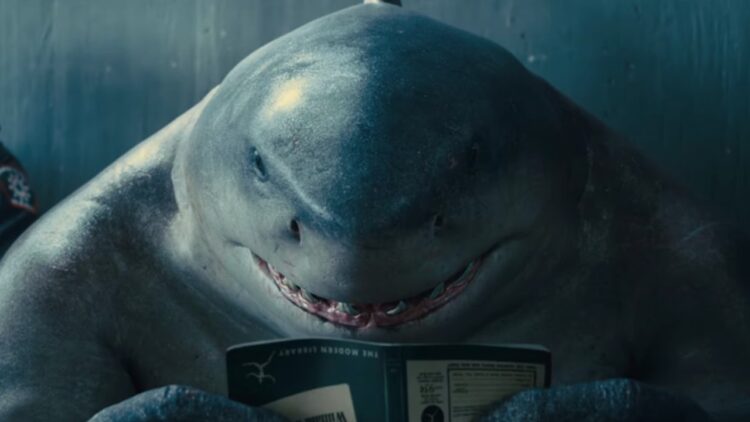 By this point, you’ve probably already heard The Suicide Squad being described as one of the craziest films of the year. But calling it crazy does not even begin to do it justice. The Suicide Squad is one of the most hyper, brutal, and completely fucking insane blockbusters you’re likely to have seen for a long time, and it also might just be one of the best films in the DC Extended Universe to date. Writer and director James Gunn has presented viewers with a truly original and subversive take on the superhero genre which both hardcore fans and casual viewers will love.

Serving as a stand-alone sequel to the critically-maligned 2016 Suicide Squad movie, The Suicide Squad sees a mismatched group of former supervillains being dispatched to the island nation of Corto Maltese to infiltrate and destroy Jotunheim, a facility believed to contain an alien threat. When the team arrives on the island, they are soon met with resistance from the local militia, and things just get more and more violent and crazy from then on.

Idris Elba stars as Bloodsport, a former mercenary who serves as the reluctant leader of the team of mismatched villains. Gunn clearly wanted to feature characters with conflicting personalities, and Bloodsport was constantly at odds with John Cena’s Peacemaker, with the former simply wanting to complete the mission to protect his daughter and the latter wanting to fight for peace at any cost, even if a few civilians are killed along the way. Peacemaker also has disagreements with Rick Flag, who was once again played by Joel Kinnaman, with the two characters having moral conflicts about the lengths they will go to in order to ensure peace. The strong performances of the lead actors helped to sell these scenes, although it was left to the viewer to pick a side when it came to the actual moral debate is n question. Morality is prevented in very black and white terms throughout The Suicide Squad, and the script thankfully never preaches to us about the nature of right and wrong. On a lighter note, it was also amusing to watch Bloodsport, who has a phobia of rats, constantly being at odds with Ratcatcher 2 (Daniela Melchior), as she literally has the power to control the filthy rodents.

One the other hand, Margot Robbie also delivers yet another wonderful performance as Harley Quinn, and while she didn’t have as much screen time here as she did in the two previous films where she played the character, Quinn was still given a great deal of character here. At one point, she even reluctantly kills the President of Corto Maltese after agreeing to marry him, because he told her that he will kill the entire families of anyone who dares to speak out against him and she views killing children as a red flag. We’ve known all along that Harley Quinn really does have a good heart underneath all her violent craziness, and moments like this serve to remind us that she really is not all that bad after all.

But the real breakout star here was Nanaue/King Shark, a walking humanoid shark who tries to eat anything and anyone he comes across. Although he did not have a huge amount of dialogue, Sylvester Stallone was absolutely hilarious as the voice of the character, with his blunt and almost childlike line delivery helping to make King Shark an insanely likeable supervillain. Comparisons to Groot from Gunn’s Guardians of the Galaxy movies are probably inevitable, although King Shark makes Groot look like Baby Yoda. Because it’s no exaggeration to say that King Shark has a taste for human flesh, something we are constantly reminded of throughout The Suicide Squad.

Despite all their obvious flaws and imperfections, each member of Task Force X proved to be endearing in their own unique way, as Gunn clearly has a knack for writing likeable yet flawed characters. This is a film which tugs on our heartstrings by literally showing a key character being stabbed in the heart (yes, there was literally an inside shot of blood gushing from his internal organ). So Gunn clearly does not do subtlety, but he certainly knows how to make us feel emotionally attached to his characters. Most viewers would probably not have expected to empathise with an obscure character like Polka-Dot Man (who was played by David Dastmalchian), but when we learn his tragic backstory and his reasons for joining the team, we instantly want him to make it out on top.

Viola Davis also returns as Amanda Waller, the no-nonsense director of the Task Force X program who instructs the team from her headquarters. Waller is clearly intended to be a highly dislikable character, as she threatens to send Bloodsport’s daughter to a notoriously violent adult prison unless he agrees to lead the team, and also has bombs implanted into the skulls of the members of Task Force X in order to prevent them from disobeying her orders. Seeing Waller’s subordinate knocking her unconscious with a golf club just as she was about to press the kill switches was one of the most satisfying moments in the entire film, even though Waller survives and is none too pleased when she comes to.

Needless to say, this is a film which absolutely embraces its R-rating, so whether it’s King Shark literally ripping a dude in half or Captain Boomerang’s titular weapon cutting through a soldier’s head, The Suicide Squad is likely to be one of the goriest superhero movies you’ll ever see. In an age where the superhero genre has unfairly developed a reputation as being entertainment for kiddies, there’s something so immensely satisfying about seeing Peacemaker’s exploding bullet’s literally blowing his enemies to pieces. Gunn even seems to want to go out of his way to fill his movie with as much gruesome imagery as possible at every available opportunity, with the cutaway shot of a bird pecking at a dead corpse shown when Gunn’s name appears in the opening credits being a nice touch. Similarly, it was also a relief to hear R-rated language being used constantly throughout the picture, as opposed to the sanitised language we usually get in superhero movies.

If you’ve paid any attention to the marketing, you’ll know that The Suicide Squad ends with a sequence with Starro the Conqueror, a giant starfish alien monster, going on a Godzilla-style rampage throughout Corto Maltese. Although it’s also available on HBO Max in the US, The Suicide Squad absolutely needs to be viewed on the big screen, because Starro’s rampage and most of the other action set-pieces throughout the movie need to be experienced in a theatrical environment. After all, who doesn’t want to view a giant starfish destroying a city on the largest screen possible?

The Suicide Squad takes the familiar superhero genre and completely subverts all expectations, delivering a fun, over the top, and extremely violent adventure which will be cherished for years to come. James Gunn once again put his unique stamp on the genre, and The Suicide Squad is likely to be remembered as being one of the absolute best superhero films ever made.

With its insane action set-pieces, strong performances from its lead cast, and bucket loads of gore, The Suicide Squad could easily be one of the best superhero movies ever made.