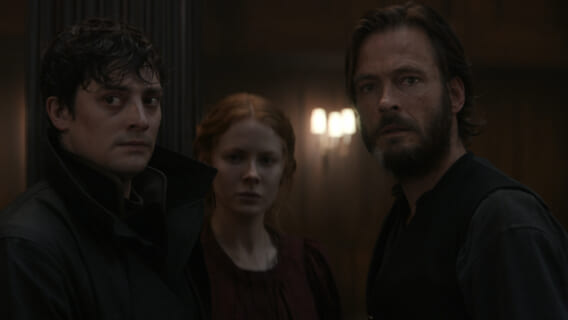 A cerebral and twisted new Netflix original series is burning up the charts this week, and I’m thrilled to see it. Sitting pretty at number 2 on the official Netflix Top 10 TV charts is 1899, a new show from the creators of the highly acclaimed series Dark.

Creators Baran bo Odar and Jantje Friese now return with another mind-melting show, 1899, that’s taking the Internet by storm. Fans worldwide are losing it over the bizarre mysteries unfolding in the new project.

The new series follows “immigrants on a steamship traveling from London to New York [who] get caught up in a mysterious riddle after finding a second vessel adrift on the open sea.“

Odar and Friese took a different turn with the show, crafting a slow-burning and completely original period piece set at sea. Trust us, this is not something any horror fan will want to miss out on.

Check out what Netflix viewers are saying about 1899 below. But before you see what others are saying, make sure you take a peek at the official trailer so you have a sense of what kind of madness you’re dealing with:

Here’s the official 1899 synopsis, per Netflix:

1899. A migrant steamship heads west to leave the old continent. The passengers, a mixed bag of European origins, united by their hopes and dreams for the new century and their future abroad. But their journey takes an unexpected turn when they discover another migrant ship adrift on open sea. What they will find on board, will turn their passage to the promised land into a horrifying nightmare.

Have you seen 1899 on Netflix yet? What are you thinking of the mysterious new series? Let us know over on Twitter @DreadCentral.