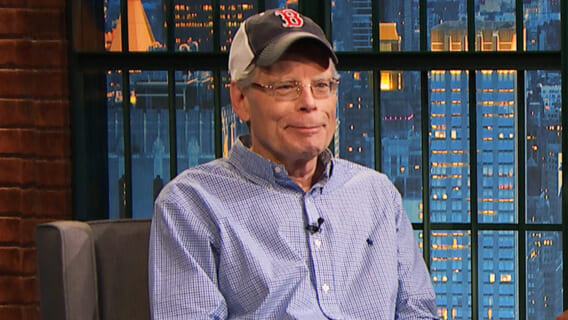 Stephen King is finally getting some much-needed closure, thanks to Netflix. The horror author and genre icon is diving into the final season of Manifest, and he’s sharing his journey with Twitter. The hit series was unceremoniously cancelled by NBC before the massive streamer picked it up for a final season.

Manifest follows the lives of passengers on a plane that disappears and suddenly reappears five years later. The passengers must grapple with the mysteries of what happened to them during those five years and how it has changed their lives forever.

Netflix acquired the series in September of 2018, where it quickly gained a massive following. So, when NBC dropped the project in 2021, Netflix snatched up the rights to produce a final season.

Fans worldwide, including my Aunt Michaela and Stephen King, are spending the month catching up on all things Manifest and flight 828.

Season 4 of Manifest will be released in two parts consisting of 10 episodes each. Part 1 was released onto Netflix on November 4.

According to Netflix, here’s the summary for the new season:

Two years after the brutal murder of Grace turned their lives upside down, the Stone family is in shambles as a devastated Ben continues to mourn his wife and search for his kidnapped daughter, Eden. Consumed by his grief, Ben has stepped down from his role as co-captain of the lifeboat, leaving Michaela to captain it alone, a near-impossible feat with the passengers’ every move now being monitored by a government registry. As the Death Date draws closer and the passengers grow desperate for a path to survival, a mysterious passenger arrives with a package for Cal that changes everything they know about Flight 828 and will prove to be the key to unlocking the secret of the Callings in this compelling, mind-bending, and deeply emotional journey.

Lastly, are you on board with Stephen King’s love of this cult favorite series? Are you excited to see how Netflix wraps things up? Let us know on Twitter via @DreadCentral. We’re always around to chat about all things Stephen King!