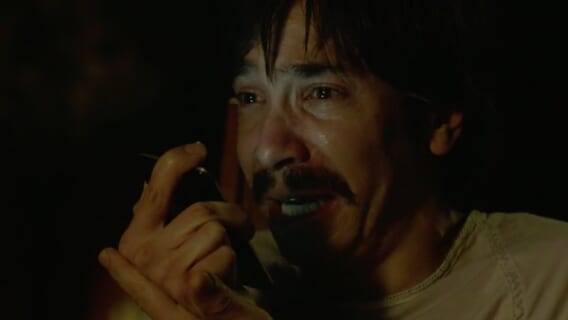 If you have seen the mindfuck that is Barbarian then you probably think they gave us all of the nightmare fuel possible. However, you’d be wrong! With all the blood, hair, and WTF moments that made it into the film, it is hard to imagine something being too gross to make it on screen.

This movie traumatized Twitter when it came and then did it again when it VOD. We believed nothing was off the table for this rollercoaster of a film. However, in an interview with Vulture, Justin Long sheds light on the one time they pulled back in this chaotic film.

Also Read: A Comprehensive History of the ‘Ju-On’ Franchise

It turns out the breastfeeding scene where Mother ( Matthew Patrick Davis) feeds AJ (Long) from her hairy nipple was the tame version of the scene. A world where that version is considered tame is terrifying. However, Long explains the alternate scene was way too disturbing even for Barbarian.

There was a moment after that where Mother, because I wouldn’t latch to her breast, she takes a rat — it’s scurrying by — and bites its head off and masticates it and baby-birds it into my mouth. Which was in the script, and I knew it was gonna happen. And we shot it right after we shot the breastfeeding scene. Zach cut that out. He felt like it was a bridge too far gross-wise.

Also Read: TikTok Claims To Have Found Three of the Most Disturbing Horror Movies on Netflix [Video]

If that doesn’t churn your stomach, then I don’t know what will. I’m disturbed, disgusted, and dizzy. I also want to see the deleted scene right now! Barbarian also stars Georgina Campbell and Bill Skarsgård. It was written and directed by Zach Cregger. You can currently catch Barbarian on HBOMax.

Let me know if you want to see this disgusting deleted scene as much as I do at @misssharai.