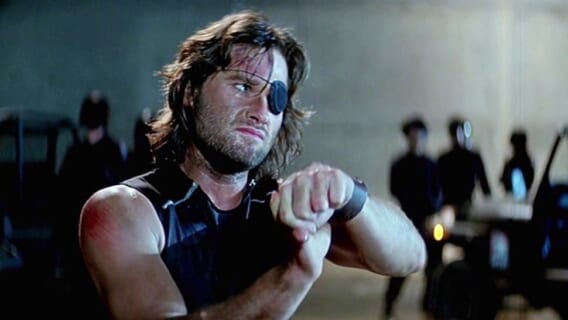 Escape from L.A. who? 26 years after the release of John Carpenter’s better-than-it-should-have-been sequel to cult classic Escape from New York, Giant Freakin’ Robot announced exclusive news that the Radio Silence filmmaking team (Ready or Not, Scream) has been tapped to helm a new sequel to one of Carpenter’s best. Kurt Russell is poised to return to the role of Snake Plissken, federal prisoner, macho man, and all around action star tentpole.

This will mark Russell’s third time in the role, with his first being the aforementioned Escape from New York.

Carpenter directed the original from a script co-written by Michael Myers himself, Nick Castle. In that 1981 epic, Donald Pleasance’s President John Harker’s plane is hijacked, crash landing into a borough of Manhattan. The city has been converted to a maximum-security prison for the most terrifying of criminals.

Previously, The Invisible Man director Leigh Whannell had been attached to a reboot of the property.

The forthcoming Scream 6, will mark Radio Silence’s third adaptation of an established IP. The collective, made up of Matt Bettinelli-Olpin, Tyler Gillett, and Chad Villella, got their start in the first V/H/S entry. They later went on to make their feature debut with Devil’s Due, a found footage shocker. Though the less said about that, the better.

There have been previous plans to bring Snake Plissken back, including in the conceptual Escape from Earth, an apocalyptic iteration that would have amped up the doomsday destruction considerably.

Giant Freakin’ Robot has noted that Carpenter’s involvement in the forthcoming project remains unclear, though given his history from The Fog to David Gordon Green’s Halloween, he’s likely to be involved in some capacity (if only for Dead Space funding).

While the new sequel to Escape from New York doesn’t yet have a release date or production schedule, it is an exciting development for fans of Carpenter’s classic.

What do you think? Are you excited for the new entry? Or, conversely, should genre projects stop tapping established IPs and reinvest in original outings? Let us know over on Twitter @DreadCentral!