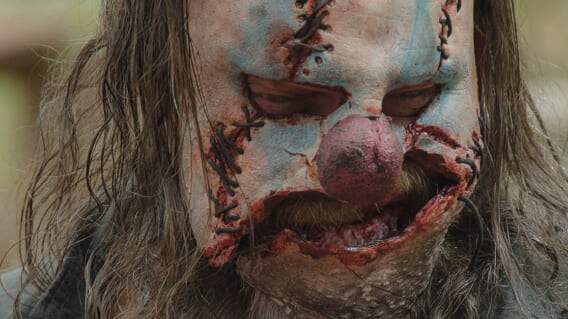 The 20th edition of the New York City Horror Film Festival returns to the NYC area this December and will close out this years lineup with Hellbilly Hollow, the latest horror film from director Kevin Wayne.

The fest will run December 1st through the 4th and tickets are available now for the four day event at Cinépolis Luxury Cinemas in NYC. Director Kevin Wayne and Kurt Deimer, producer/actor of the film respectively, will be in attendance for the screening.

Deimer and Wayne play horribly scarred—and seriously twisted —brothers Bull and Tickles who run a haunted attraction that weaves in real murders and mayhem into their staged shenanigans.

The film was produced by Andy Gould, who previously produced Rob Zombie’s The Devil’s Rejects, 31, Lords of Salem and Zombie’s two Halloween films. The film also features rising rockstar Kurt Deimer also contributed songs to the film’s rousing heavy metal soundtrack and plays one of the lead roles in the movie.

Attendees of the fest will enjoy 13 programs, each consisting of terrifying new feature films and shorts with Q&A panels and celebrity guests following each screening.

Fans and filmmakers will be able to mingle at the full bar located at the venue. The NYC Horror Film Festival will also provide virtual screenings of most of the movies showing, available one day after each live screening. VIP passes and tickets are on sale now.

Hellbilly Hollow is sure to be a hit with fans of horror, so make sure you check it out at the New York City Horror Film Festival. You won’t be disappointed!